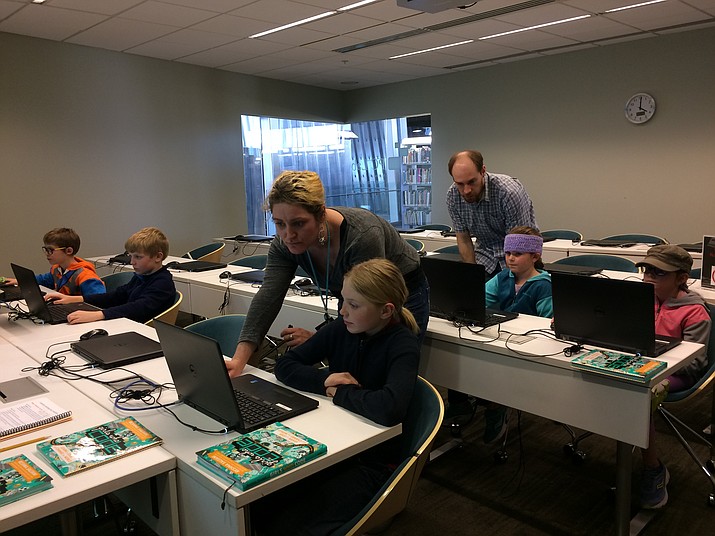 The official name of the newly established computer programming group at the Prescott Valley Public Library is The Click It Coders. Its mascot: the cricket.

The coders, a group of five third- to fifth-graders who meet every Monday after school in the second floor PC Lab, began as a Teen Girls Who Code club.

“Boys are also welcome,” said Assistant Teen Librarian Coleen Bornschlegel, co-teacher, adding that the teen part of the club was canceled for now because of lack of interest, but the younger ages are meeting.

Girls Who Code is an international organization dedicated to teaching skills to girls in an effort to close the gender gap in the computer science industry. No prior skill or knowledge is necessary to be a part of this group that meets from 3:30 to 5 p.m. on Mondays.

On Feb. 25, the current five members voted on their name and mascot: the Cricket Click It Coders. Or maybe it’s the Click It Crickets. Delighted at the rhyming name, the youngsters first reviewed terminology from their first meeting two weeks ago.

Jeff Howick, children’s library assistant, asked: What does a variable do? What is a loop? What does conditional mean?

Then they “moved” on to learning how to create a dance routine.

First, they chose a character and background scene. Then, laboriously at first, they added a series of moves. Howlick and Bornschlegel walked the young coders through each step, offering a plethora of choices.

The Click It Crickets will speak with their parents before the next class about using an email address so they can save their work from week to week. For now, their dancing characters performed for each other, then disappeared.