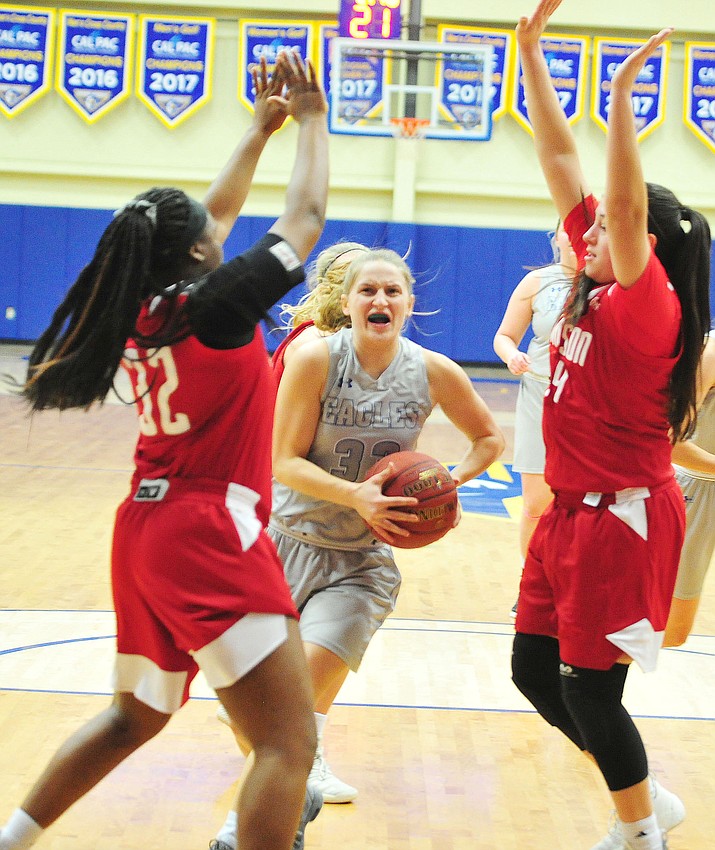 To put it bluntly, no. Technically, the Eagles are co-champions with NAIA Division II No. 11-ranked Antelope Valley.

The winner of that semi will vie for the tournament crown at 8:30 p.m. Monday against the victor of Saturday’s other semi pitting No. 3 UC Merced vs. No. 2 Antelope Valley. The Cal Pac Tournament champion captures an automatic berth into the NAIA National Tournament March 6-12 in Sioux City, Iowa.

“We’ve had incredible buy-in, commitment, teamwork, togetherness and toughness throughout the year that’s put us in this situation,” first-year Embry-Riddle coach Michael Trujillo said from California Feb. 22. “The team has worked really hard for a championship and they definitely earned it.”

Embry-Riddle tied Antelope Valley (23-5, 12-2) atop the conference standings on the last day of the regular season Feb. 16, marking the first time in Cal Pac history that there have been co-champs.

However, the Eagles won the tiebreaker with Antelope Valley for the top seed into the conference tourney.

How, you ask? It took four of the league’s tiebreakers to settle the matter.

First, ERAU and Antelope Valley split their regular-season series, as both squads won at home in close contests.

Second, both teams had the same results against the rest of the league in descending order of finish. ERAU and Antelope Valley each had only one other loss, succumbing to third-place UC Merced (23-6, 11-3 Cal Pac).

Third, both teams had the same away-game victories in descending order.

The fourth tiebreaker decided it, though. It looks at aggregate points allowed in the teams’ head-to-head contests. Embry-Riddle surrendered 188 points (96+92) to Antelope Valley, while Antelope Valley allowed 189 (101+88). In other words, one point decided that Embry-Riddle was the top seed.

Nevertheless, Antelope Valley’s hosting the conference tournament because it won the regular-season conference title last season. In 2020, Embry-Riddle will play host to the Cal Pac tourney.

“That’s why it was a huge deal for us to win it this year – nine of our [ladies] will be seniors next year and they get to play at home [in the tournament],” Trujillo said.

The Cal Pac has three teams with 20-plus wins for the first time in league history: Embry-Riddle, Antelope Valley and UC Merced. The Cal Pac record for overall victories in women’s basketball is 26 (Menlo in 2013). … Antelope Valley has offered women’s basketball for only three years, and in each of those seasons the Pioneers have either won or shared the regular-season Cal Pac title. … Embry-Riddle athletics has won a conference-record five league titles in 2018-19, in women’s basketball, volleyball, women’s soccer, and men’s and women’s cross-country. … Danae Ruiz became the first ERAU women’s basketball player to reach the 1,000-point plateau in her career when she drained a 3-pointer in the Eagles’ 52-44 win over Cal Maritime Feb. 14. … Embry-Riddle’s Melissa Pfeifer grabbed a career-high 20 rebounds in the Eagles’ 82-38 win over Pacific Union Feb. 16, the highest single-game total in the Cal Pac this season.

The two Cal Pac tournament semifinal winners will play for the tourney title and an automatic berth into the NAIA Division II National Tournament at 8:30 p.m. Monday, Feb. 25, at Pioneer Event Center in Lancaster, California.

The Cal Pac Conference contributed information to this story.

All times listed as Arizona time