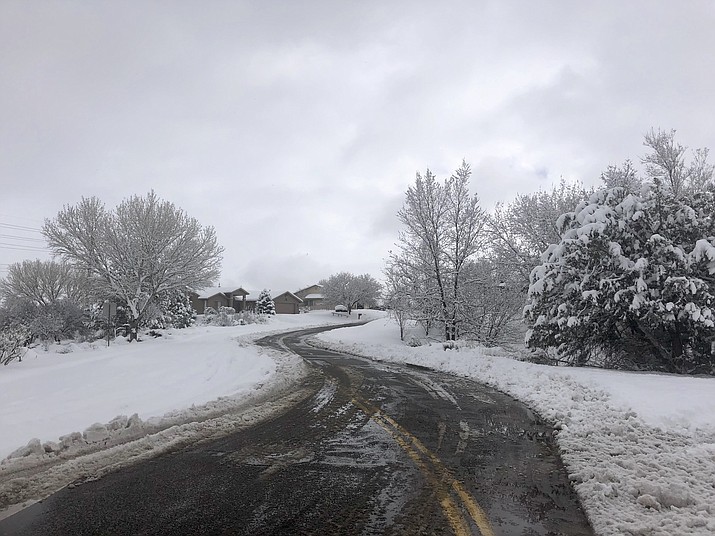 With more than 20 inches of snow on the ground in Prescott as of 1 p.m. Friday, Feb. 22, the city’s street crews have moved on to clearing secondary residential streets.

And that could take some time, say city officials.

Prescott Public Works Director Craig Dotseth said Friday afternoon that crews had started at about 9 a.m. Friday to make a pass through the residential streets.

“We’re trying to get a path in and a path out,” he said of the residential and side streets.

In some areas, though, Dotseth said the crews were experiencing challenges because of the depth of the snow. “We’ve had at least five plows stuck in the last three hours,” he said.

The city news release stressed that there were “still areas where snowplows have limited access,” and said side streets and residential neighborhoods will be cleared as conditions permit over the next several days.

Dotseth estimated Friday afternoon that it would take another entire day for crews to get somewhat of a path in and out of the residential streets.

The storm, which began Wednesday night, Feb . 20, “has been an unprecedented snow event,” according to the release. “The city urges patience as we continue to make progress.”

Even as the snow is being removed, the city is warning about the danger of icy conditions as well.

The National Weather Service is predicting a low of around 12 degrees Friday night.

After closing at noon on Thursday, Prescott City Hall was closed Friday. The Prescott Public Library also was closed.

City officials say there would be no collection of payments expected Friday; any bills that are due or overdue will be excused until Monday, Feb. 25.

In addition, a number of other city facilities are closed Friday, including:

• The solid waste transfer station. Trash cans should be put out on Monday morning and left out until serviced. For questions, call 928-777-1126. Staff will be on duty answering.

Meanwhile, a number of city functions are back up today, including the Prescott Regional Airport, where all commercial flights for Friday are scheduled to take place. Information on status of flights is available at: www.United.com.

In addition, essential and emergency city services remain operational, but access is limited due to icy road conditions in some areas. The news release notes that the city would respond to emergencies, “acknowledging limited access/capacity.”

The city is reminding the public that Prescott is still under a snow emergency, and a Winter Storm Watch.

“Expect continued hazardous winter driving conditions, including ice and possible additional snowfall,” the news release states. “Please refrain from driving if at all possible so snow plows can continue to operate and emergency services personnel can respond as needed.”

The city also is reminding commercial plow operators not to push snow into the public street. “That is dangerous and illegal,” the news release stated.

Also, for those who have a fire hydrant in front of their property, the city says, “We appreciate your help clearing snow around the hydrant.”

The city reports that it currently has every available resource out working on snow removal, including 16 plows, five graders, and seven backhoes, which are concentrating on the main arterials and major and minor collectors.

• More than 20 inches of snow has accumulated at City Hall (unofficial). Snow accumulation at Goldwater Lake stands at 36 inches.

• Snowfall may be experienced through the day.

• Elks Hill on Gurley Street is still open and all attempts will be made to keep it open.

• Cinders are being put down but with continuing snow fall they also continue to get covered up and removed with the snow.

• No city streets have been closed and no power outages have been reported.

• All City of Prescott fire stations are fully staffed and two additional reserve vehicles have been deployed.

• The Coalition for Compassion and Justice (CCJ), US Vets, and Salvation Army are providing emergency shelter for the vulnerable population.

• Citizens can also check www.AZ511.com for updates on road closures.

• For other snow plowing information, go to www.prescott-az.gov, click on Snow Plowing for more information.