Snowstorm prompts declaration of emergency by City of Prescott 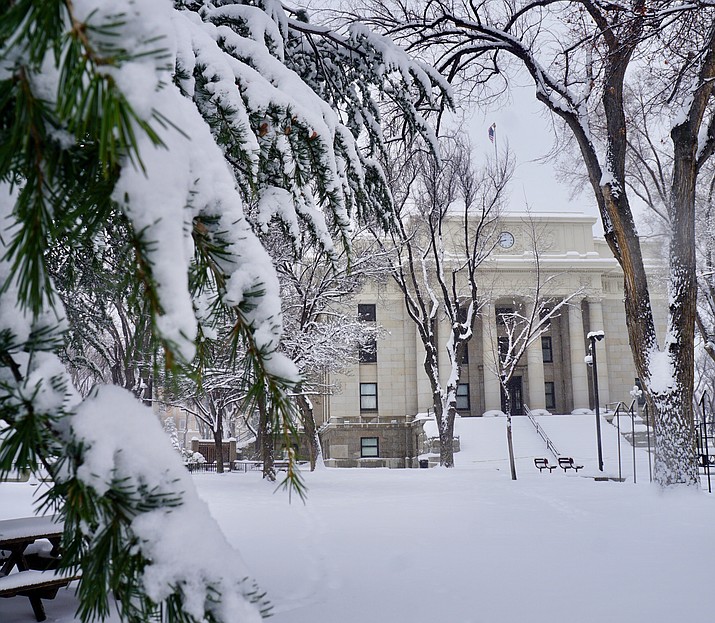 With 12 inches of snow already accumulated on the ground before 1 p.m., and the condition of area roads “degrading” rapidly, Prescott Mayor Greg Mengarelli signed an emergency proclamation Thursday, Feb. 21. 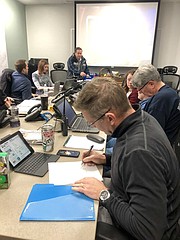 With 12 inches of snow already accumulated on the ground before 1 p.m., and the condition of area roads “degrading” rapidly, Prescott Mayor Greg Mengarelli signed an emergency proclamation Thursday, Feb. 21.

The mayor was among the dozen or so top city officials who gathered at the Prescott Communications Center early Thursday to deal with the snowstorm that had been predicted to bring between 17 and 23 inches of snow to Prescott from Wednesday night through Friday.

A city news release at about 11:30 a.m. Thursday reported an estimate of eight inches had fallen by 11 a.m., and that the National Weather Service was forecasting the storm would intensify over the afternoon. By 1 p.m., the city had updated the total to 12 inches (unofficial).

“We’re seeing pretty good accumulation already,” Mengarelli said after signing the proclamation at about 9 a.m. “The plows are doing a good job, but they’re having trouble keeping up.”

Prescott Public Works Director Craig Dotseth said the city had assembled a total of 16 snowplows, two graders, and five backhoes to deal with the city streets.

The Prescott downtown, aside from evidence of snowplows, was a veritable ghost town Thursday, Feb. 21, 2019. (Cindy Barks/Courier)

Still, he said Thursday morning, “the condition of the streets is slowly degrading.”

On Prescott’s downtown streets, a steady stream of snow-removal equipment was at work Thursday morning, clearing the snow and applying cinders. But with the rapid pace of the snowfall, the condition of the streets continued to deteriorate.

One major difference in the city’s downtown approach for this storm was an ongoing effort to keep Elks Hill open to traffic.

The steep one-block stretch on Gurley Street has traditionally been the first city street to be closed in the snowstorm. But Dotseth said crews would be attempting to keep it clear and open this week.

Maintaining traffic on the major downtown artery is “better than rerouting onto Marina Street,” Dotseth said, noting that the detoured traffic at the top of the hill on Marina has caused issues in the past. 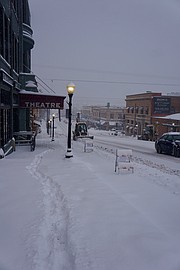 Gurley Street’s “Elks Hill” is pictured on Thursday, shut down due to the snowfall. (Cindy Barks/Courier)

City Manager Michael Lamar said the purpose of the scaled-down Emergency Operations Center was to allow for quick communication between departments. “We can make instantaneous decisions without delay,” he said.

On hand at the center Thursday morning were representatives of the police, fire, public works, legal, and community development departments. The Recreation Services Department was also aiding with the snow removal.

Police Chief Debora Black said city residents had appeared to follow the advice of public safety officials earlier in the week to stay off the roads, if possible.

“We’re so fortunate that the public really listened to the reports,” she said. “There are very low volumes of traffic.

Black noted that as of about 10 a.m., Thursday, the police department had responded to just one collision at about 5 a.m. Police officers were also working to aid the most vulnerable residents, she said, including homeless people.

Prescott Valley snowplows were on Glassford Hill Road on Thursday as the storm continued in Prescott Valley. (Les Stukenberg/Courier)

Fire Chief Dennis Light agreed that the preparation work that preceded the storm was helping with the response on Thursday.

“This storm was fairly predictable,” Light said, noting that the forecast had been reported well in advance. “We have ample resources available.”

For instance, he said the fire department vehicles had all been equipped with chains, and pickup trucks with snowplows are available to help with calls. 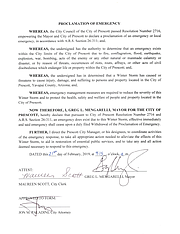 Meanwhile, at the Prescott Regional Airport, incoming and outbound flights were canceled Thursday through Friday morning.

Before declaring the emergency, the city officials at the Emergency Operations Center discussed a list of factors that went into the declaration.

Although Prescott City Hall was open Thursday morning, it closed at noon because of the ongoing heavy snowfall. A news release from the city noted that calls would continue to be answered at the city’s main telephone number, 928-777-1100.

Heiney added that the city would continue to do regular updates on its website, www.prescott-az.gov, and on its Facebook page.