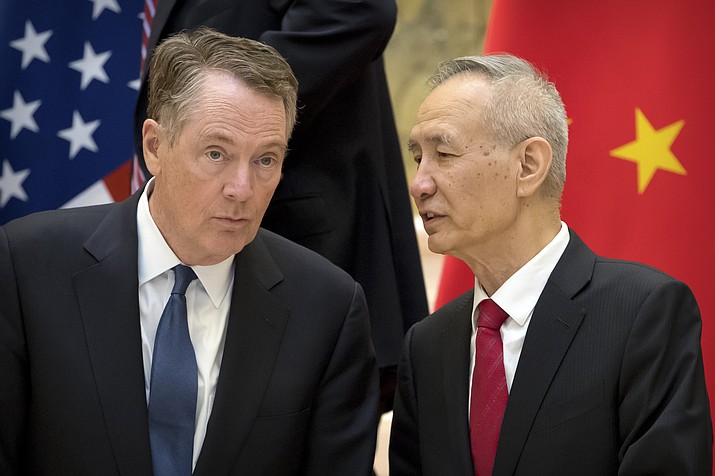 Chinese Vice Premier Liu He, right, talks with U.S. Trade Representative Robert Lighthizer, while they line up for a group photo Feb. 15, 2019, at the Diaoyutai State Guesthouse in Beijing. China's economy czar is going to Washington for talks Thursday and Friday aimed at ending a tariff war over Beijing's technology ambitions.(Mark Schiefelbein/AP, File)

WASHINGTON — The Trump administration is set Thursday to resume high-level talks with Chinese officials, aiming to ease a trade standoff that has unnerved global investors and clouded the outlook for the world economy.

A Chinese delegation led by Vice Premier Liu He will meet in Washington with a U.S. team led by Trade Representative Robert Lighthizer and including Treasury Secretary Steven Mnuchin and Commerce Secretary Wilbur Ross as well as Larry Kudlow, a key White House economic adviser, and Peter Navarro, a trade adviser. The talks are expected to end Friday.

The world's two biggest economies are locked in a trade war that President Donald Trump started over his allegations that China deploys predatory tactics to try to overtake U.S. technological dominance. Beijing's unfair tactics, trade analysts agree, include pressuring American companies to hand over trade secrets and in some cases stealing them outright.

To try to force China to change its ways, Trump has imposed tariffs on hundreds of billions in Chinese goods. Beijing has retaliated with tariffs of its own. China rejects the allegations and complains that Washington's goal is simply to cripple a rising economic competitor.

On March 2, the Trump administration has warned, it will escalate its import taxes on $200 billion in Chinese goods from 10 percent to 25 percent if the two sides haven't reached a resolution by then. But in recent days, Trump has signaled that he may be willing to extend the deadline if negotiators are making progress.

The conflict has rattled markets. It's also fanned uncertainty among businesses that must decide where to invest and whether Trump's tariffs — which raise the cost of the affected imports — will be in effect long enough to justify replacing Chinese suppliers with those from countries not subject to the tariffs.

The International Monetary Fund, the World Bank and the Organization for Economic Cooperation and Development have all downgraded their forecasts for the global economy, citing the heightened trade tensions.

After meetings last week in Beijing, Lighthizer said the two countries had "made headway."

And citing upbeat comments from the two countries, Xingdong Chen, chief China economist at BNP Paribas, said the negotiators are "likely to make progress, convincing Trump it is worth extending the tariff truce if necessary."

US, China exchange goodwill gesture ahead of trade talks
US, China end talks on tariff battle with no word on outcome
US-China talks break up after US raises tariffs
China announces tariff hike on $75 billion of US products
US-China deal seems dim but possible as talks stay on track