Prescott gears up for ‘largest winter storm of the season’ 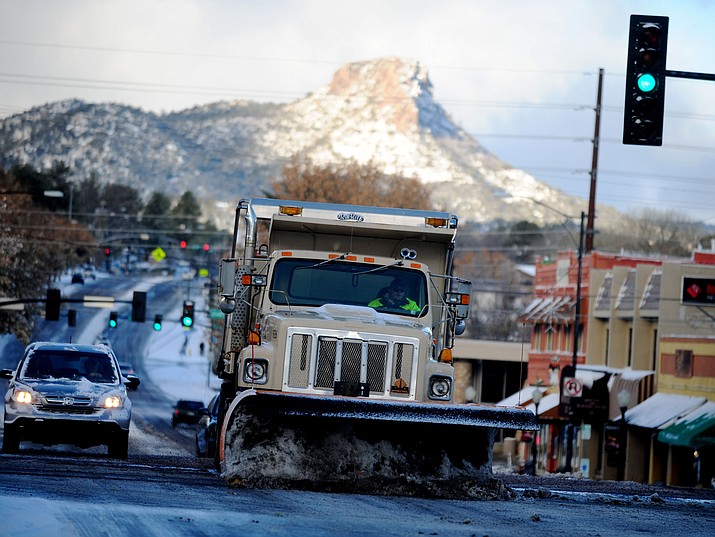 A City of Prescott snow plow hits the intersection of Montezuma and Gurley streets in 2015. The National Weather Service is predicting the Prescott area could see anywhere from 15 to 27 inches of snow Thursday and Friday, Feb. 21 and 22. Visit dCourier.com for updates today on the winter storm. (Les Stukenberg/Courier, file)

Closure of the Prescott Public Library, a reduced staff at city hall, canceled airline flights, and a possible emergency declaration are among the expected impacts to the community due to a winter snowstorm that is predicted to last for the next several days.

In a news release late Wednesday afternoon, Feb. 20, the City of Prescott reported that it is gearing up for what appears to be the largest winter storm of the season.

The city is urging citizens who do not have to travel during or immediately after the snow event to stay off the road to allow emergency services and plows to do their jobs. “If you must travel, please allow plenty of extra time and exercise extreme caution,” the news release adds.

To deal with snowy city streets, city public works personnel are currently on duty on 12-hour shifts. They will be assisted by recreation services staff. “The city has 16 plows, six backhoes, and will be renting dump trucks for snow removal,” states the news release.

The city intends to follow its usual procedure of concentrating on major roads first. Once those are cleared safely, work will begin on secondary streets.

“We ask that the public be patient, as we cannot estimate how long it will take to fully clear streets following such a large snowfall,” says the news release.

Plowing updates will be available online at: www.presott-az.gov, by clicking on “Snow Plowing Information,” as well as on the city’s Facebook page.

Police and fire departments are planning to staff up as needed to meet emergency demand. The Prescott Police Department is working with local agencies to ensure that vulnerable populations are made aware of the impending snow event, and that they are aware of shelter and service options.

The fire department will work with Lifeline to make sure that vehicles are outfitted properly, allowing for appropriate emergency response as needed.

On Thursday, the city will operate a scaled-down Emergency Operations Center (EOC), where critical personnel are located in the same facility for better coordination and communication.

Community Outreach Manager John Heiney estimates that about a half-dozen key city staff members will be on hand in the center to coordinate the city’s emergency response.

The Prescott Public Library will be closed on Thursday, Feb. 21, and will determine whether it can reopen Friday or Saturday after the snow event.

City offices will be open on Thursday, with a reduced staff. The news release notes that non-essential city employees who do not feel safe coming into work have been excused for the day. The city adds that there will be no collection of payments expected on Thursday or Friday.

“Any bills that are due or overdue will be excused until Monday, Feb. 25,” states the news release.

As of Wednesday evening, United Express’ inbound flight from Los Angeles on Wednesday, Feb. 20, and the outbound flight to Denver Thursday, Feb. 21, have been cancelled.

The city reports that United Airlines has waived change fees for flights in and out of the Prescott Regional Airport on Thursday, so passengers can reschedule without penalty.

“If you plan travel to or from Prescott tomorrow (Thursday), go to United.com and “Check Flight Status,” or call their reservation line at 800-864-8331,” states the news release. It adds: “If travelers are stranded at Prescott Regional Airport on Thursday for any reasons, the city will make special arrangements.”

Prescott Mayor Greg Mengarelli will be on standby on Thursday morning for the possibility of signing an emergency proclamation, which the city plans to post on its website.

Heiney said the proclamation would be the first step toward possible cost recovery, should the storm result in an emergency situation.

Snow plowing updates are available online at: www.prescott-az.gov, by clicking “Snow Plowing Information.” The news release suggests that for non-emergency snow-related questions pertaining to the city, residents should call 928-777-1100.

Information provided by the City of Prescott. Courier reporter Cindy Barks contributed to this story.