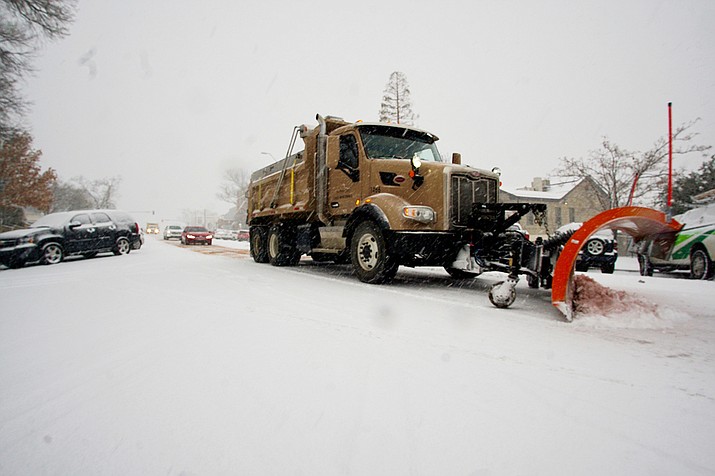 A City of Prescott snowplow clears the road and applies a cinder treatment to Marina Street near the corner of Willis on Dec. 31, 2018. (Cindy Barks/Courier file)

In what could turn out to be near record-setting snowfall this week, the City of Prescott is assembling a response arsenal that includes snowplows, backhoes, dump trucks, and possibly an emergency operations center.

Prescott Public Works Director Craig Dotseth said Tuesday afternoon, Feb. 19, that his department is preparing for a snow event that is predicted to bring upwards of a foot of snow, and probably more.

As of Tuesday afternoon, the National Weather Service was predicting that Prescott’s snowfall would begin Wednesday night with 2 to 4 inches. Eight to 12 inches more is forecast for Thursday, with another 4 to 8 inches Thursday night, and 1 to 3 inches on Friday.

Using those predictions, Prescott could see 15 to 27 inches over the three-day period.

The city’s response to that will include the use of at least 16 snowplows and trucks equipped with plows; six backhoes; and contracted dump trucks for hauling away the piles of snow expected to accumulate in downtown Prescott.

Noting that Public Works and other city departments are working together, Dotseth said the city has “a multitude” of plans and procedures that are set to go into motion.

Along with the 12 regular snowplows that the city has on hand, Dotseth said plans also involve using two backup plows (a one-ton truck, and a six-wheel dump truck, both equipped with plows).

The city also has a truck from the Solid Waste Department, and another from the city fleet that will be equipped with plows – for an overall total of 16 plows.

In addition, the city will deploy about a half-dozen backhoes from the Water and Parks and Recreation departments for dealing with snow buildup at intersections and in cul-de-sacs.

To replenish the city’s supply of cinders for treating the streets, he said a contractor hauled in an additional supply throughout the day Tuesday.

In addition, the city is looking at contracting with private equipment operators to help with the plowing, Dotseth said, as well as for loading and hauling away the windrows of snow that typically are piled in the center of downtown streets during large snow events.

Depending on the severity of the storm, Dotseth said the city may choose to set up an emergency operations center to deal with incoming calls.

Regardless of the decision, Dotseth said the Public Works Department and Streets division would have multiple people answering the telephone during the storm.

The city will be following its usual priorities in clearing the streets, Dotseth said, with major arterials cleared first, followed by minor arterials and residential streets.

Heiney said the city would be posting updates at least twice a day on its Facebook page, at: https://www.facebook.com/cityofprescott/.

While the predicted totals would not reach the record-setting snow of Jan. 11 to 13, 1930, Dotseth said it likely would exceed totals that he remembers from recent decades.

Many long-time Prescott residents also remember the blizzard of 1967, which reportedly brought 30 inches of snow to the area — 18 inches of which fell between Dec. 12 and Dec. 14, according to the Prescott Evening Courier.

A number of major snowstorms have occurred through the years since then. Dotseth, a long-time city Public Works employee, recalled one storm in late 1996 that brought about a foot of snow.

Snowstorm prompts declaration of emergency by City of Prescott
City: Avoid driving in winter conditions
City: ‘Every available resource’ at work clearing streets after ‘unprecedented’ snowfall
Prescott prepares for a possible white Christmas
City on clean-up: 'I've never had to deal with this much snow'
Event Calendar