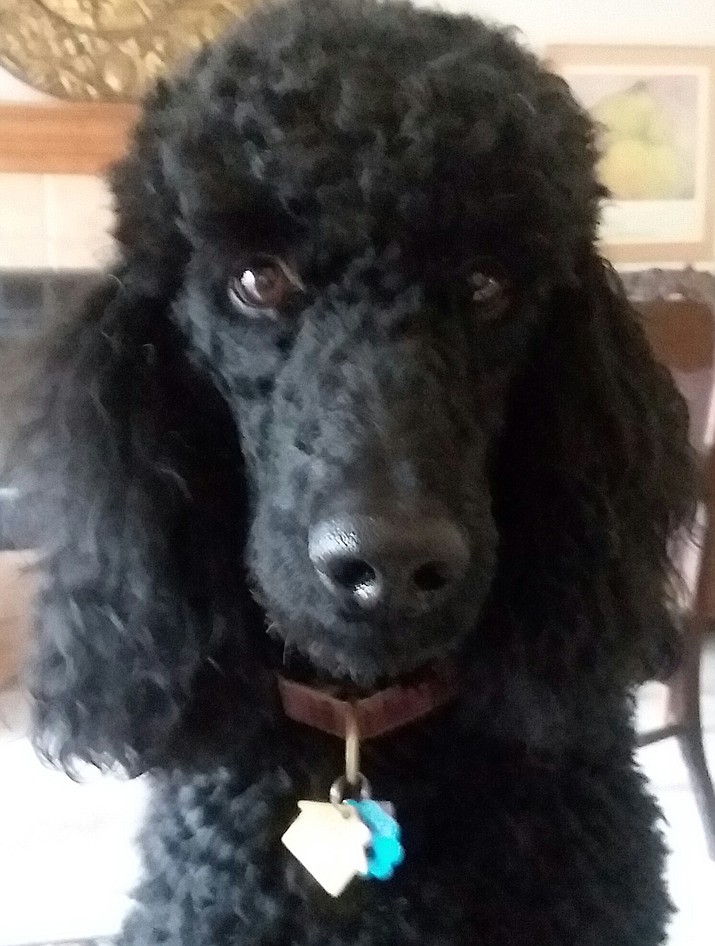 BoJay proudly displays his tags. The microchip tag and the pet’s license should always be attached to the dog’s collar. (Christy Powers/Courtesy)

The microchip is an identification system that is implanted at the back of the neck under the skin of our pups. It is about the size of a large grain of rice. It comes with a tag and an 800 number, which is attached to the dog’s collar so that if the dog is found, the finder can call that number and the owner will be contacted by the company.

Both my dogs have microchips. Fortunately they have not wandered off. However, returning from five weeks away in my RV with my then three dogs a few years ago, I was driving around the tight curves at Lake Mead and Hoover Dam — with cross winds causing me to cling tightly to the steering wheel, when my phone rang. I very carefully answered. The voice asked for me by name and said he was calling from Avid, the microchip company. I would have panicked except that I knew all of my dogs were safely in the RV with me. I told him I was driving and could he please call back in about two hours.

He did call back. Turns out my dog’s collar with the tag was found in a park in Washington where we had done some hiking. I was confused but realized that getting the dogs back in the van, I had removed their collars, and must have dropped the one on the ground. A gal found it and called the 800 number.

I was delighted that I was not missing a dog, but I was also delighted that the system worked. The last night of my trip, I stopped at an RV park in Nevada. Everywhere were signs posted about a missing little dog. The man at the office said he hoped someone had found the dog because otherwise he would be eaten by coyotes. I hoped that this little guy had a microchip.

All vet offices and animal shelters are supposed to have universal scanners, and every found pet that is brought into one of these places is supposed to be scanned for a chip.

In order for a chip to be effective, the pet owner must keep their information current with the microchip company, the pet should be wearing the tag attached to his collar showing that he has a chip, and the person finding the pet must call the 800 number or take the pet to a vet or shelter where he can be scanned.

In gathering information for this column, I did a little research and found that there were some difficulties with the chipping process. It seems that there are now some chip companies that will send you the chip for you to insert it yourself. Some of the problems with a microchip are if it is inserted incorrectly, it can get into an artery and cause serious problems — or sometimes they can move around.

My advice would be to have the chip inserted by your veterinarian and use the chip that he recommends. Chances are good that he is using one of the better known and respected chip companies.

The breeder of my BoJay has the chip inserted in all of the puppies before they go to their new homes. But if someone requests otherwise, she would agree to that. A person getting BoJay’s sister requested that the pup not be chipped.

For me, I think it is a good idea to chip our dogs. On the news recently, a dog had been lost for four months and finally was returned home thanks to a microchip. There are lots of similar stories. Eventually all babies will all be chipped at birth, I think! But I suppose you can opt out of that as well.

Christy Powers is a free lance writer whose passion is studying and writing about pet health, nutrition and training. She can be reached at cpowerspak@gmail.com.

Letter: Pet owners: Microchip, ID furry loved ones
All About Pets: Be prepared for July 4th noise
Make sure Fido is home for Christmas
Stop brushing your teeth and go find your dog
Cyborgs at work: employees getting implanted with microchips