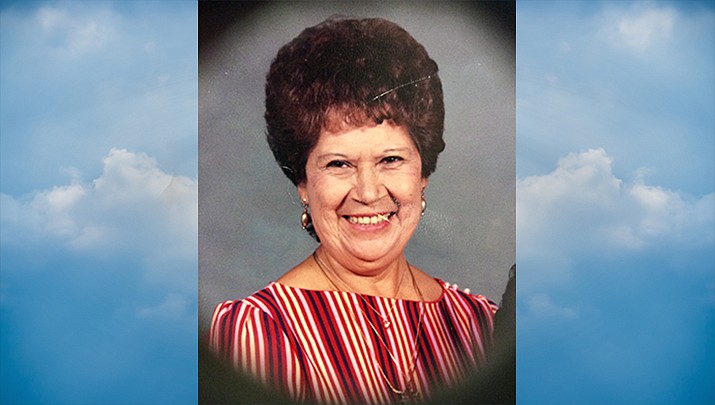 She grew up in the Mayer/Humboldt area, settling down in Humboldt after marrying her first husband, Teodore Pedroza. She spent her young adult years as a homemaker, raising two children, Carl “Porky” Pedroza and Irene Pedroza. Humboldt is where she said she made many of her lifelong friends.

Angie also lived in Phoenix, where she began her 20-plus years of employment with Safeway, working in the meat department and as a cashier. This is where she met her second husband and love of her life, Bobby Nash. Angie and Bobby married in 1967, moving back to Prescott, where they both continued working for Safeway until their retirements. Angie enjoyed collecting and selling antiques, a passion Bobby shared with her as evidenced by their trips to various venues to buy and sell their “treasures.” They also enjoyed road trips to area casinos to spend “a few pennies.” Later in life, Angie became a member of The Red Hat Society.

Angie is survived by her granddaughter, Annette Pedroza Trujillo (Angelo); great-grandson, Nathaniel; and great-granddaughter, Tamara. She is also survived by many beloved nieces and nephews, as well as extended family on the Nash side. Angie was predeceased by her loving husband of over 50 years, Bobby; son, Porky; and daughter, Irene. She was also predeceased by her brothers, Eugene, Tim, Tommy, Lupe “Sapo,” Ramon; and sister, Annie Soriano.

UPDATE: Services were postponed due to weather. All services will be held on March 8, 2019: Rosary at 10:30 a.m., followed by Funeral Mass, 11 a.m., at Sacred Heart Catholic Church, and Interment, 2 p.m. at Odd Fellows Cemetery.