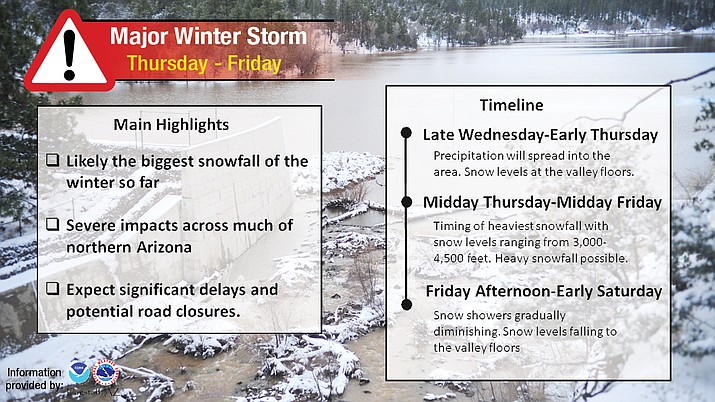 A major winter storm will bring what is likely to be the biggest snowfall so far this winter to Northern Arizona Thursday, Feb. 21, and Friday, Feb. 22. Anyone with travel plans later this week should begin to consider alternatives. (National Weather Service/Courtesy) (Photo by Les Stukenberg/Courier)

Sunday night’s blizzard was a pretty healthy one in the Quad Cities, but Thursday’s could easily surpass it.

Though a weather warning began throughout northern Arizona at 11 a.m. Sunday, Feb. 17, snow didn’t start falling in measurable amounts in most areas until about 9 p.m. By 6 a.m. Monday, the winter event was essentially over.

Volunteer weather reports from Chino Valley to Mayer showed amounts ranging from 2 inches to more than 6 inches of snow accumulation, according to the National Weather Service (NWS).

One report from downtown Prescott showed the most, with 6.3 inches. Another report in Chino Valley measured 5.3 inches and two reports in Mayer measured 5 inches. The single report out of Prescott Valley was 4 inches.

The National Weather Service office near Flagstaff has issued a Winter Storm Watch for an approaching major storm. This storm will bring what is likely to be the biggest snowfall so far this winter to northern Arizona.

Precipitation is expected to spread into the area starting late Wednesday, Feb. 20, with snow levels as low as the valley floors in Phoenix.

The heaviest snowfall is expected midday Thursday through midday Friday, with snow levels ranging from 3,000 to 4,500 feet. The inclement weather should taper off starting midday Friday, according to the NWS.

Initial reports called for 8 to 12 inches of snow. As of Tuesday, the forecast calls for 17 to 23 inches in Prescott; 14 to 20 inches, Prescott Valley; and 12 to 18 inches, Chino Valley. This snowfall will mostly be on Thursday.

Road conditions will be “very difficult to impossible” and some roads may even be closed, the Weather Service reported Tuesday. “Significant reductions in visibility are possible due to falling and blowing snow.”

“Anyone with travel plans later this week should begin to consider alternatives,” NWS stated on its website.

Reminder: If you are a print subscriber to the Courier, you can also get your news in the Courier’s e-edition, dCourier.com, which is included free with the print subscription. For information, call 928-772-1212.