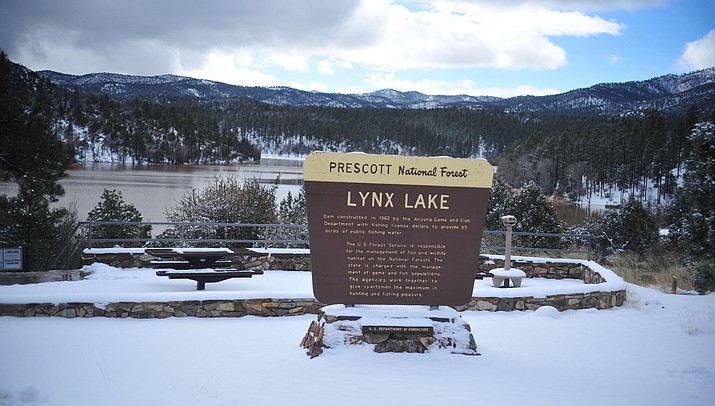 Lynx Lake is blanketed in snow Monday, Feb. 18, 2019 in the Prescott National Forest. The lake received about 3 inches of snow overnight from the fast moving storm. More snow is expected from a stronger storm on Thursday into Friday this week. (Les Stukenberg/Courier)

D’Evelyn credits the road conditions not being quite as icy and people being much more prepared this time around.

“[The snowstorm] had been predicted well in advance, which likely helped to reduce unnecessary travel and those planning to stay in outlying wilderness areas,” he said.

Overall, he said YCSO only handled a couple slide off collisions Monday morning, but “nothing major.”

“Prescott Fire did not have an abnormal number of accidents associated with the snow this morning,” said PFD Fire Marshall Don Devendorf.

All of the agencies said they are prepared for what may come later this week as winter weather is expected to worsen, but their hope is locals will limit their travel to avoid having any issues on the road

“Do not drive unless it is absolutely necessary,” Ferguson advised.