'Alita: Battle Angel is easily the most entertaining movie so far’ 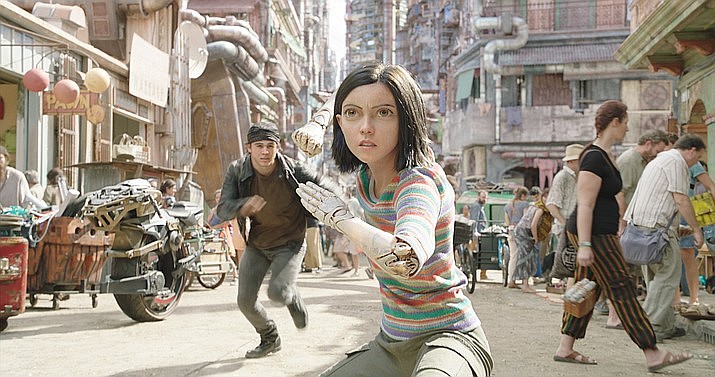 The sci-fi fantasy "Alita: Battle Angel" topped the charts and beat out a number of newcomers including the meta romantic comedy "Isn't It Romantic" and the horror sequel "Happy Death Day 2U" in its first weekend in theaters. (Photo released by 20th Century Fox)

Definitely worth braving the Stockton Hill Road madness. “Alita: Battle Angel” is easily the most entertaining movie so far this year! Never mind we're only a month and a half into the new year. Simply put, this is a movie of comeuppance, a reluctant heroe, redemption, excitement, suspense and even a touch of a love story mixed in.

Alita (Rosa Salazar) is a completely computer-generated figure in the film. Salazar is real. She just wears a skintight “performance” body suit that's embedded with sensors that allow a computer to copy her moves. Alita is found in a scrap heap by Dr Ido (Christoph Waltz). We're talking years in the future where a person's brain can be implanted into a robot and everyone has some type of robotics implanted in them. Dr. Ido just happened to have a spare robotic body he made for his daughter. She was killed before being able to use it. All he had to work with was Alita's head and part of her chest which he implanted onto the cyborg body.

Alita and Dr. Ido develop a kind of paternal relationship. She calls him father. Alita soon learns Dr. Ido sidelines as a “hunter-warrior” – basically a bounty hunter. She follows him and he gets trapped into a fight. She comes to his aid and discovers she has some awesome warrior moves. She can fight.

In the past, there was some kind of interstellar conflict between Mars and this planet. The end is referred to as the Fall, but Mars lost. The floating city above, Zalem, is where the upper class lives and everyone else wants to go there.

Enter in Dr. Ido's ex-wife Chiren (Jennifer Connelly), who left him after the death of their daughter. She works for the local gangster who runs a roller derby sporting event promising the winner a move to Zalem. You'll have to find out what actually happens to winners. Meanwhile, when Alita gets into her skirmishes with the local gangster population, she has flashbacks to what her life was before. Those flashbacks help substantiate why she is such a good fighter. She meets and falls in love with Hugo (Keean Johnson). He's a gangster too that steals robotic parts off of people but later seeks to turn his life around.

During some of her flashbacks, Alita learns the enemy's name, who is also the ruler of Zalem. The movie ends when she decides to take a different route to Zalem.

This is a typical story of the heroine that in order to get to one goal, she must attain numerous other goals. Some stories start to drag when those other obstacles are presented, but here it is made more interesting and you don't get lost in the details. Alita is a character that's easy to follow, easy to identify with and easy to cheer on. It is a James Cameron film, so you know it's epic and doesn't short change the effects, which are amazing. Her eyes are captivating. This is one of the quickest two hours I spent at a movie. There's plenty of fight scenes, minus the graphic gore, and maybe a few obscenities. It is rated PG13. The end is most likely the lead-in for the next chapter. Grab a large soda and a big bucket of popcorn because you won't want to miss a minute.

Kevin Nowicki is a movie reviewer for The Kingman Daily Miner and shares his work with its sister publication, The Daily Courier.