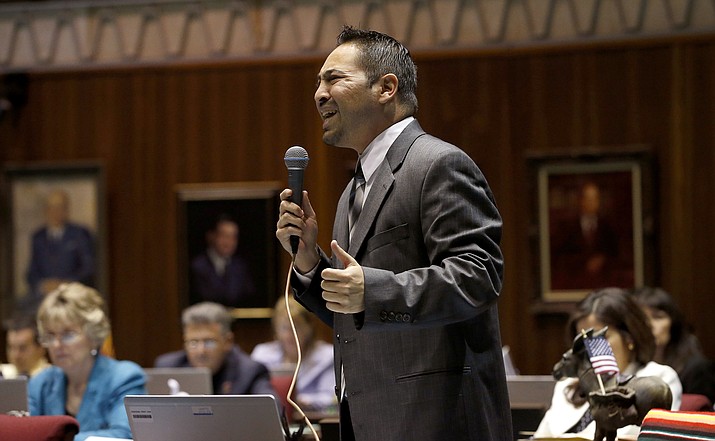 PHOENIX — Republican lawmakers and their business allies are moving once again to put new hurdles in the path of citizen groups that want to propose their own laws.

SB 1451, approved Thursday by the Senate Judiciary Committee, would impose new requirements on paid circulators and the organizations that hire them to collect signatures. These range from a mandate to provide a phone number and email address to insisting that when petitions are turned in they are grouped by circulator.

Sen. Martin Quezada, D-Glendale, said the new requirements appear to be a way to provide those who oppose what voters are proposing additional opportunities to keep them off the ballot.

“These are purely technical hurdles,’’ he said.

“What this does is it gives more ammo for those who wish to challenge and deal with these issues in court rather than at the election box,’’ Quezada argued. More to the point, he said it could result in the disqualification of otherwise legitimate signatures asking to put an issue to voters solely because the person who circulated the petition failed to provide an email address.

That’s also the assessment of Rivko Knox of the League of Women Voters to the additional mandates.

“If you put enough I’s and T’s (into the requirements), some dots and crosses are bound to be missed,’’ she said.

Sen. Vince Leach, R-Tucson, who is sponsoring the measure backed by business interests, did not dispute that the new mandates would provide additional opportunities for court challenges to initiatives by those who want to keep a proposal off the ballot.

“That may well be,’’ he said. But Leach said there is a constitutional mandate on lawmakers to protect the integrity of the elections process.

Nor was he apologetic for the idea that his legislation would allow otherwise-valid signatures to be thrown out because of the failure of circulators to follow all the rules.

“You have people acting on behalf of a committee pushing forward legislation in some form,’’ Leach said.

The legislation comes on the heels of Proposition 127, an initiative by California billionaire Tom Steyer to require utilities to get at least half of their electricity from renewable sources by 2030, a measure opposed by the state’s electric companies.

Leach was part of a legal effort by business groups to block the issue from ever getting to voters, with challengers alleging various flaws and defects in the petition-gathering process. Leach also bemoaned that there were “boxes and boxes and boxes’’ of petitions filed at the last minute, a move he said was designed to overwhelm the system and make it difficult for foes of the initiative to mount a challenge.

In a 33-page ruling, Maricopa County Superior Court Judge James Kiley rejected all of the arguments, concluding that there were enough valid signatures to let the issue go to the ballot. As it turned out, voters rejected the initiative in what became the most expensive campaign in state history on both sides.

Sandy Bahr, lobbyist for the Sierra Club, chided lawmakers for both the idea and the timing of the hearing, coming as it does on the 107th anniversary of Arizona becoming a state.

“Statehood Day, or really any day, is a bad day to nick away at an important constitutional right,’’ she told lawmakers.

Bahr said SB 1451 is the latest in a multi-year effort by lawmakers to change the rules in ways she said are designed to impair the ability of voters to propose their own laws.

That includes a 2017 measure pushed through the Republican-controlled Legislature to require that all initiative be in “strict compliance’’ with every election law before they go to voters. That overruled prior court rulings which said that initiatives need only be in “substantial compliance’’ with the law to survive a legal challenge.

Yet at the same time, Bahr said, legislators have eased some of what they have to do to get their own names on the ballot, things like allowing signatures to be collected online, an option not available for initiative petitions.

Leach said the difference is justified.

He said if voters make a mistake in who they elect there are various methods of fixing that, including ousting them at the next election, recalling them and even having a vote of other members to eject them, as happened last year with the decision by the House of Representatives to expel Rep. Don Shooter, R-Yuma, after concluding he had sexually harassed lawmakers and others.

“When you make law, constitutional (or) statutory, by the democratic process, there is nothing that you can do,’’ Leach said. That’s because a constitutional provision -- one crafted and approved by voters in 1998 over the objections of lawmakers -- bars the Legislature from repealing or making major changes to anything approved at the ballot.

That’s also the argument presented to lawmakers by Garrick Taylor. He lobbies for the Arizona Chamber of Commerce and Industry, one of several business organizations supporting what Leach wants to do.

“We believe these are common-sense reforms that are applied to a high-stakes process,’’ Taylor said, what with the inability of lawmakers to amend voter-approved measures.

Support of business interests for new restrictions on voter-crafted laws is no surprise, given that they tend to be on the losing end of these proposals.

In 2006 and again in 2016 voters agreed to create and then raise the state minimum wage after courts rejected legal efforts by the state chamber from even allowing the issue to come to a vote.

Businesses also have found themselves on the losing end of public votes on other issues, ranging from banning gestational crates for pigs to allowing patients to use marijuana for medical reasons.