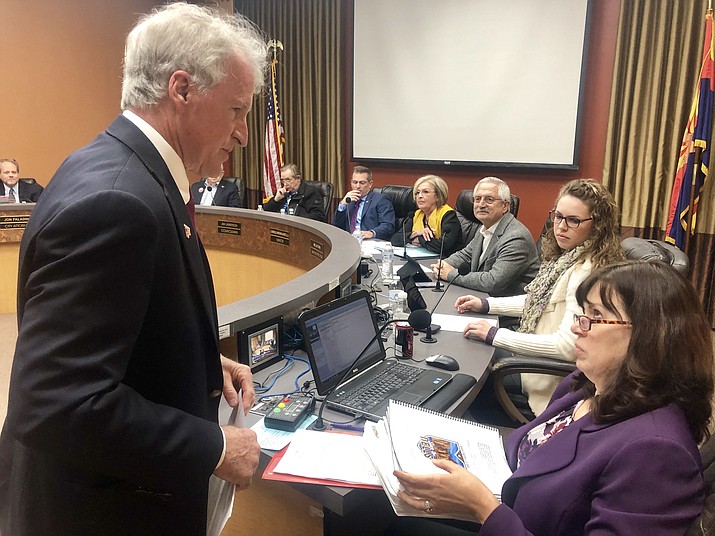 Thomas Rusing, a member of the Save the Dells advocacy group, submits a petition containing nearly 5,000 signatures to the Prescott City Council this week. The petition asks the city to support Save the Dells’ position for preserving 500 acres of open space in the proposed Arizona Eco Development project in the Granite Dells. (Cindy Barks/Courier)

Closed-door negotiations reportedly have fallen short by about one-half on advocates’ preservation goals for the iconic Point of Rocks in the heart of the Granite Dells.

While community preservation efforts have focused on preserving 500 acres of key Point of Rocks-area land, the developer says the company has offered about 250 acres.

That apparently was not enough for the City of Prescott.

In a brief statement Thursday, Feb. 14, the city reported that although “significant progress” had been made during the past several months of closed-door negotiations, “At present, there is a divergence between what the city and AED (Arizona Eco Development) consider acceptable.”

Prescott City Manager Michael Lamar said the negotiations had not secured the amount of open space that the city had hoped for.

“It’s fair to say we’re not there yet,” Lamar said Thursday.

Previously, city officials had expressed optimism that the negotiations would result in a compromise that would preserve a significant chunk of land around the iconic Point of Rocks granite formation near the intersection of the Peavine and Iron King trails.

Meanwhile, the local advocacy group, Save the Dells, has been pushing for the preservation of a 500-acre regional park that would preserve the land that the group terms as being in the heart of the “iconic and beloved Granite Dells.”

During the Prescott City Council’s Tuesday, Feb. 14 voting meeting, Save the Dells member Thomas Rusing presented a petition containing 4,851 signatures of people who urged the city to endorse the plan for the 500-acre park.

The petition asks for preservation of “the Granite Dells and the ecologically important wooded valley along No-Name Creek as a publicly accessible natural park in perpetuity, in exchange for the many benefits of annexation enjoyed by the developer.”

Lamar said Thursday that the “divergence” in opinion involves a difference of opinion about the “size and scope of the public open space.”

While the entire 500 acres might not have been attainable, Lamar said the city was hoping for a compromise that the community and the developer could both view as a “win-win.”

Short of achieving the desired amount of open space, the city says the annexation and project will now proceed to the usual public review for annexation.

“At this juncture, AED will go through the public vetting process with a revised proposal, which will be reviewed at multiple Planning and Zoning Commission and City Council meetings,” the news release stated.

Jason Gisi of Arizona Eco Development reported Thursday that the company has proposed about 250 acres of contiguous open space at and around the Point of Rocks.

“There is not 500 acres of open space to be dedicated to the public in the plan I will submit to Planning and Zoning,” Gisi said, maintaining that the proposed 250 acres includes the “prime land” of the Point of Rocks area.

In addition to that piece, he said other land would be preserved as private open space throughout the project.

Gisi said the closed-door negotiations were intended to “narrow down the dialogue on the scope of the deal points that are central to AED and the City of Prescott.”

And he says the process had plenty of successes. “In my mind, we’ve made good, solid progress,” he said. “There are multiple deal points on a project this large, and there are various opinions on what is left to be nailed down.”

Next up for AED will be the submission of a revised application. Gisi said he expects to do that within the next two to three weeks.

SAVE THE DELLS EFFORTS

Joe Trudeau, chairman of Save the Dells, said Thursday that while he believes city officials were working in “good faith” to secure more preserved area in the Granite Dells, he speculated that “things fell apart” prior to this week’s statement by the city.

“I think we can attribute that to the owner of the property who doesn’t want to be pushed around,” Trudeau said, maintaining the company “is not interested in living up to its rhetoric” about preservation.

Trudeau noted that AED is “not a mom-and-pop outfit,” and has the flexibility in its budget to preserve the 500 acres without it affecting the company’s bottom line. By not agreeing to do so at the outset, he said, “(AED has) missed the opportunity to come out looking like heroes.”

Save the Dells Communications Director Amber Fields points out that the organization’s position has received “tremendous support” from the community, which she said is evidenced by the petition’s nearly 5,000 signatures, which are still coming in.

Prescott Community Development Director Bryn Stotler said Thursday that after Gisi submits his revised application, the city would restart an internal staff review, which could take six to eight weeks.

Although noting that it is just an estimate, Stotler said the project could be on a Planning and Zoning Commission meeting agenda by about early May.

The public will have a number of opportunities for feedback on the annexation during the coming Planning and Zoning and City Council meetings, city officials say.

Despite the result of the closed-door negotiations, Lamar said he is still “cautiously optimistic” that the parties would find a way to make the annexation work for the community and developer.