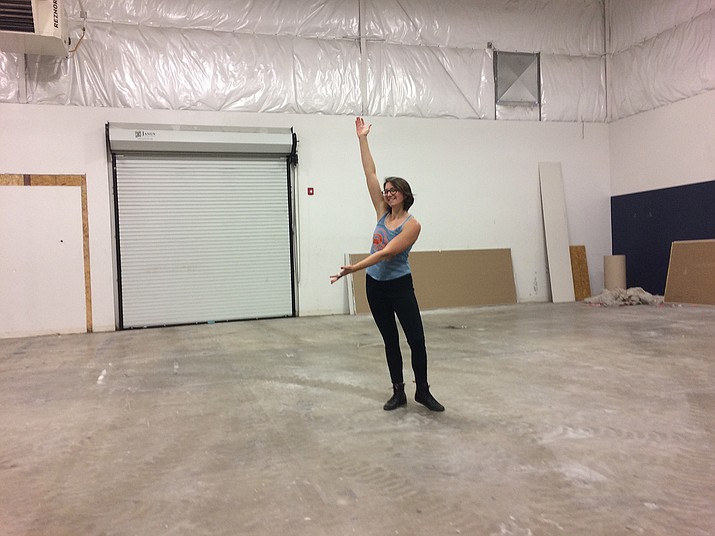 The Launch Pad Teen Center Deputy Director and Community Outreach Coordinator Laura Tully shows off the warehouse space that is the new, soon-to-be-renovated home of the center, which will have a second-story and a teen-operated coffee shop with a working title of “Over the Moon” café. (Nanci Hutson/Courier)

The Launch Pad Teen Center is in a celebratory mood these days — the grass-roots youth empowerment hub launched five years ago finally has a home of its own.

On Saturday, Feb. 23, The Launch Pad leadership and teens will invite the public to join them in christening the downtown, 10,000-square-foot warehouse at the back of the Captain CrossFit gym at 420 Sixth St. The annual “Share the Love” donation-encouraged event this year will officially kick off an ambitious $1.5 million “Can You See It?” capital campaign.

To date, $425,000 of that amount has been collected; $350,000 was used to close the deal in late November on the purchase from Granite Mountain Fitness, the owners of Captain CrossFit. The remaining funds are to be used to refurbish and furnish the facility, as well as cover two years of operational expenses.

The focus now is on the renovation into a teen-specific architectural design intended to compliment the center’s focus on workforce development, the arts, experiential learning, and tutoring opportunities. A centerpiece will be a teen apprenticeship project initiated through a $10,000 United Way of Yavapai County social enterprise grant – a coffee house with the working brand name “Over the Moon.”

The Launch Pad founder and Executive Director Courtney Osterfelt admits she is over the moon with the progress and prospects for solidifying the center’s presence that five years ago was just a dream. Since investing a $14,000 inheritance to start the center in a church classroom, Osterfelt said she has been overwhelmed by the solid, and continually growing, community support for what has become a place where teens can discover who they are meant to be.

Beyond a daily drop-in space, The Launch Pad offers a myriad of year-round programming and camps focused on the arts, academics, recreation and outdoor adventure.

The architectural design and plans for the new center have been donated through Otwell Associates Architects, with Fann Contracting donating $30,000 to articulate those designs into blueprints. Ridgeline Builders will do the construction at cost.

A Prescott College graduate with a master’s degree in social change and community development who taught gender studies at the college for five years, Osterfelt now leases space from the college for the center’s operation that last year served 1,200 teens from throughout the greater Prescott area. The center, with an annual budget of about $80,000, is slated to remain in what is its third location at 302 Grove Ave. until the new building is ready, she said.

The very name of the new fundraising campaign is rooted in planting a vision, one Osterfelt said she knows is now in the lens of so many. Mayor Greg Mengarelli is to be the “Share the Love” guest speaker.

“Imagine a welcoming space with an art studio, a café where teens learn to run a small business, a learning lab with free academic services to support teens struggling in school, community meeting rooms, a stage where teens share their voice through poetry, music, and outdoor programming space with a garden, native plants and places to play,” Osterfelt wrote in her invitation. “Can you see it? We can.”

Asked when a grand opening might be expected, Osterfelt laughs.

She, her staff and their teen regulars all say they have their fingers crossed the renovations will be completed by the beginning of the 2019-20 school year.

“This is incredible, and overwhelming in some ways,” Osterfelt said of the momentum. “But it’s really exciting how our community has come together around an idea to better serve our youth.”

What: The Launch Pad Teen Center’s “Share the Love” benefit

Tickets: No tickets are required, but donations are encouraged. All proceeds will benefit The Launch Pad programs.

Details: The benefit will highlight the center’s new building and kick off of its capital campaign titled, “Can You See It?”

The event will include food donated by El Gato Azul, wine donated from Action Wine and Spirits and a specialty cocktail offered by the Barley Hound and its catering service, Hawk and Hound. There will be entertainment and a high-end, four-item silent auction: a catering package from Hawk and Hound Catering, diamond earrings from Raskins Jewelers, a private light lesson from Universal Helicopters and a donated guest home stay at a vineyard in Napa Valley.

Carved In Stone will also be taking orders for engraved bricks to benefit the capital campaign.

The title sponsors and hosts for the evening that will include testimonies from teens, parents and other community leaders will be Michael and Cody Anne Yarnes. Mayor Greg Mengarelli will be the guest speaker.

While no tickets are required, seating is limited. Anyone wishing to attend is asked to call The Launch Pad Founder and Executive Director Courtney Osterfelt at 928-632-2996.