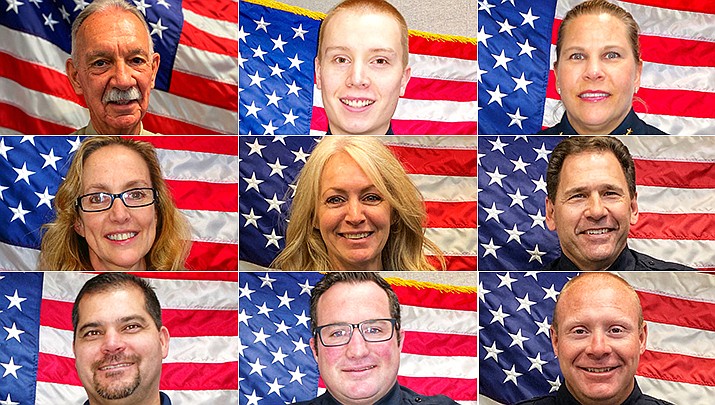 The Prescott Police Department (PPD) announced its 2018 employee awards on Friday, Feb. 8, 2019 at the Elks Theater in Prescott, Arizona. The annual awards recognize individuals for their achievement, professionalism and dedication to PPD’s mission and values. (PPD photos)

The Prescott Police Department (PPD) awarded its 2018 employee awards to several members of the department on Friday, Feb. 8.

Held at the Elks Theater in Prescott, the ceremony recognized the following individuals for their achievement, professionalism and dedication to PPD’s mission and values:

Volunteer of the Year: Citizen on Patrol (COP) Volunteer Dan Barkwill received this award for selflessly dedicating himself to the COP Program and PPD by spending over 600 hours volunteering and filling the essential role of the COP Sgt.

“Dan is a good team leader and often spends hours making sure that special events are a success,” said PPD Chief Debora Black.

Rookie of the Year: Officer Wyatt Novak received this award for displaying the ideals and characteristics essential as a PPD officer and embracing the department’s values of integrity, courage, accountability, respect and excellence.

“Wyatt is trusted and relied upon to get the job done and is quickly becoming a ‘go to guy,’” Black said.

Community Service Award: Deputy Chief Amy Bonney received this award in recognition of going above and beyond to serve the community by way of her work. In 2018, Bonney was instrumental in organizing and implementing the ‘Pink Patch Program’ for the department and raised over $9,000 in this endeavor.

“She also helped to create the Facebook ‘lip sync video,’ which served as an excellent public relations tool that reached about 800,000 people,” Black said.

Communications Specialist of the Year: Mary Workman received this award in recognition of her willingness to lead as an emergency dispatcher; her desire to serve citizens and first responders; and her professionalism.

Workman volunteers her time to help with the hiring process for new dispatchers and has served as a mentor to new hires.

Civilian Employee of the Year: Michelle Medina, Administrative Supervisor, received this award for her tireless dedication to excellence and her desire to serve others.

Her professionalism and trustworthiness is second to none. Medina has been recognized for her dedication to serving crime victims.

“She is a true unsung hero to others,” Black said.

Sworn Police Officer of the Year: Officer Matt Medina received this award in recognition of his drive for excellence in the law enforcement profession and his dedication to the office, victims of crime and the citizens of this community; as well as his consistent display of professionalism, teamwork and pride in a job well done.

“Matt is a valuable resource of knowledge and makes himself available to all,” Black said.

Medina was recently appointed by Governor Doug Ducey to serve on an Arizona Peace Officer Standards and Training Board.

Supervisor of the Year: Robb Martin received this award for displaying the highest standards of professionalism as a Prescott Regional Communications Center (PRCC) supervisor.

Robb is the Arizona 911 community co-chair. He has also trained the Arizona Crisis Team to help them become more successful.

All while helping to ensure the PRCC serves all of its partners with the utmost efficiency.