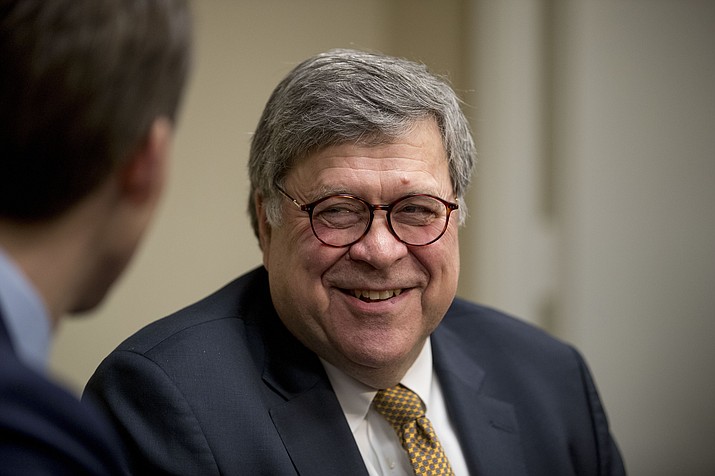 In this Jan. 29, 2019, file photo, Attorney General nominee Bill Barr, right, meets with Sen. Josh Hawley, R-Miss., a member of the Senate Judiciary Committee in Washington. The Senate Judiciary Committee is poised to approve Barr’s nomination to be attorney general, a vote that is likely to be mostly along party lines as Democrats have questioned how transparent Barr will be once special counsel Robert Mueller’s Russia investigation concludes. (Andrew Harnik/AP, file)

The vote now heads to the full Senate, where Barr is expected to be confirmed in a vote as soon as next week.

Barr, who previously served as attorney general from 1991 to 1993, would succeed Attorney General Jeff Sessions, who was pushed out by Trump last year over the president's anger that he had recused himself from the Russia investigation. As the country's chief law enforcement officer, Barr would oversee the remaining work in Mueller's investigation into potential coordination between the Kremlin and the Trump campaign.

"I appreciate what Mr. Whitaker has done, but I think the time has come for new leadership at the department," Sen. Lindsey Graham, a South Carolina Republican and committee chairman, said at the outset of Thursday's meeting.

Barr's confirmation is expected in the Republican-controlled Senate, though his nomination encountered resistance Thursday from Democrats concerned by Barr's expansive views of executive authority and by his non-committal stance on making public Mueller's findings.

"This is particularly concerning, as nothing in existing law or regulations prevents the attorney general from sharing the report," Feinstein said Thursday. "In fact, as part of our oversight responsibilities, Congress routinely requests, and receives, confidential information related to closed investigations."

Democrats have also criticized a memo Barr wrote to the Justice Department before his nomination in which he criticized Mueller's investigation for the way it was presumably looking into whether Trump had obstructed justice. In the memo, Barr wrote that Trump could not have obstructed justice by firing former FBI Director James Comey since it was an act the president was constitutionally entitled to take.

That view has alarmed Democrats, especially since the obstruction inquiry has been central to Mueller's overall investigation.

"This is not the time to install an attorney general who has repeatedly espoused a view of unfettered executive power," Sen. Amy Klobuchar, a Minnesota Democrat, said Thursday.

Some Democrats have also expressed concern that Barr won't be a check on the president who appointed him.

Trump had repeatedly criticized Sessions for recusing himself from Mueller's investigation into Russian interference in the 2016 presidential election that includes examining the ties between Russia and the Trump campaign. Trump calls the probe a "witch hunt."

Barr said in his hearing last month that he is a friend of Mueller's and that "it is vitally important" that the special counsel be allowed to complete his investigation.

"I don't believe Mr. Mueller would be involved in a witch hunt," Barr said.