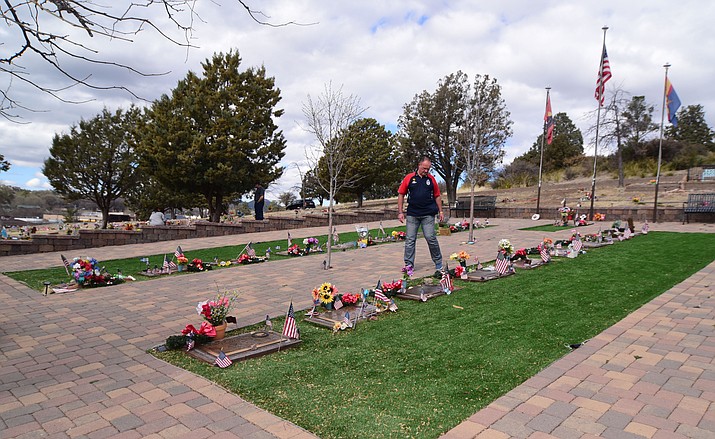 • HOTSHOTS — Waz Taylor has an affinity for the United States. From Sheffield, South Yorkshire in England, he visited Arizona about six years ago.

Back in England, in 2013, he was listening to news from the U.S. when he heard the word Yarnell. “I was just there,” he said to himself, tuning his attention even closer, he recalled this past week.

Sadly, it was news of the Yarnell Hill Fire and the deaths of 19 of the Granite Mountain Hotshots. He was crushed.

This past year he began calling and writing to anyone who would listen, proposing the renaming of Highway 89 through Peeples Valley and Yarnell in honor of the Hotshots. You likely read about that in this space in June 2018.

Since then the concept has been a veritable hot potato — agency after agency, official after official saying it was a nice idea but they did not have jurisdiction. Even the Governor’s Office kicked the idea U.S. House Rep. Paul Gosar’s way, concerning this state route’s name.

My check of maps — printed and online — shows only that it is a state highway. I am unsure what the problem is; a call to the Governor’s Office this week was not immediately returned.

Undaunted, Taylor visited Arizona again last week. He went to the Capitol, then made his way here. In Wednesday’s Courier we published a photo of him placing pieces of granite from England on each of the Granite Mountain Hotshots’ graves at the Arizona Pioneers Cemetery. He also planned to visit Yarnell and points in between.

Here’s hoping we get an answer soon about his proposal.

• DRIVING — My recent entries in the quad-city traffic debacle elicited many comments from readers (thank you!). Among them was an email from Jack Clevenger, someone who has “very consciously striven in his life to drive safely and be a responsible driver.”

He wrote that three things contribute significantly to safety problems with driving in the Prescott communities, especially along Highway 69:

1 – Drivers’ failure to know about or observe the “2-Second Guideline” space behind the car in front of you. “In my 13 wonderful years as a resident of Prescott, I cannot believe that MOST drivers maintain less than 2-seconds space behind me while doing 45 mph (or faster) on Highway 69. This is insane and I am sure is the cause for most rear-end collisions.”

2 – Most drivers do NOT really stop at the stop signs but just “roll over” to make their entry into an intersection. “It is not so much the not stopping that concerns me but the drivers not paying attention to other cars crossing diagonally and getting into their pathway. Again, this being mostly dangerous on Highway 69 when cars are whizzing by.”

3 – Finally, the extremely dangerous practice by a very significant percentage of drivers who blatantly run lights when they are clearly RED before they are passing through the intersection. “I see them making it a ‘game’ to beat the lights but seriously inviting deadly disaster to self and others.”

“All of this as one who knows, really knows, how fast accidents can happen on the road from his own accidents (none were my fault and I practice defensive-responsible driving). And yet, most ‘accidents’ were and are preventable due to the above.”

Jack adds that most drivers who practice these dangerous driving habits do so because they have never been in a serious, life-threatening crash. He signed his comments: “For what it is worth, as one who wants to survive driving into his 80s and beyond (I am almost 70).”

Thank you, Jack. I pray awareness does not come only from being involved in a crash.

• PICK OF THE WEEK — (Proving there’s always something good to do in the Prescott area that’s cheap or free): The Prescott Farmers Market, 10 a.m. Saturdays through May 4, at Prescott High School, 1050 Ruth St. www.prescottfarmersmarket.org.