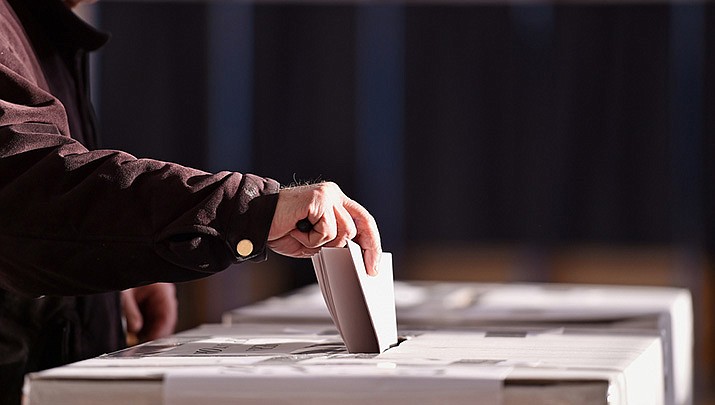 PHOENIX — Republican senators voted Wednesday to block those who get early ballots from simply dropping them off on Election Day.

Senate Bill 1046 would not deny the right to vote to those who don’t drop their ballots into mail in time to arrive by Election Day. They would still get the right to cast a regular ballot at a polling place.

That, however, that would mean standing in line with everyone else to wait their turn to provide identification and for an available voting booth, rather than simply dropping the ballot into a sealed box. And that additional hurdle, said Sen. Lisa Otondo, D-Yuma, will result in disenfranchising voters.

But Sen. Michelle Ugenti-Rita, R-Scottsdale, who crafted the measure, rejected that contention. She said the requirements would apply to all, regardless of political party or any other factors.

That didn’t satisfy Sen. Juan Mendez, D-Tempe, who said it isn’t necessary to single out any group for special treatment for a measure to have disparate effects. He suggested the legislation was “the new Jim Crow,’’ referring to laws in the Deep South through the 1950s that effectively were designed to suppress black votes and enforce racial segregation.

What’s behind the measure are contentions by proponents that it takes too long for voters to learn who actually has won elections. Ugenti-Rita blames that on people dropping off their early ballots at polling places, meaning election officials don’t start counting them until after all the Election Day ballots are tallied.

The situation drew particular attention this past November when some of the candidates who appeared to be winning when early returns came in ended up being defeated after all the early votes were counted. And in virtually every case, the vote swing from those late-submitted early ballots was toward Democrats.

Despite questions and charges raised by the Arizona Republican Party, no hard evidence of any fraud was found. But Sen. J.D. Mesnard, R-Chandler, said that is irrelevant.

Sen. Sylvia Allen, R-Snowflake, said the legislation will “bring some confidence back to our elections’’ rather than people “waiting days and days and days for votes to be counted, wondering, and people imagining all kinds of things about why the delay, why it takes so long.’’

But Sen. Martin Quezada, D-Phoenix, said the trade-off is forcing people who want to wait until the last minute to forfeit the easy ability to simply drop off their ballots on Election Day and instead face the possibility of long lines.

And Quezada cited the 2016 state presidential preference primary, where Republican Marco Rubio dropped out a week before Election Day. And that left Rubio supporters who voted early out of luck as there is no way to recall those mailed-in early ballots.

Mendez said he is one of those people who purposely delays casting his ballot.

“It’s a strategic position,’’ he said.

“I do this because I know someone’s going to say something that’s the equivalent of putting their foot in their mouth or they’re just going to show their true colors,’’ Mendez said. “I want to wait until the very last day.’’

Ugenti-Rita also said no one is forced to vote by mail. And if they do get an early ballot and can’t — or won’t — get it into the mail on time to arrive by Election Day, they can still vote a regular ballot.

But Sen. Andrea Dalessandro, D-Green Valley, said if the goal of the legislation is to speed election returns this is precisely the wrong thing to do.

She said that the election systems in Cochise, Gila, Greenlee, La Paz, Mohave, Pima, Pinal and Santa Cruz counties are not set up to be able to tell whether someone who shows up at a polling place already has cast an early ballot.

What that means, Dalessandro said, is these people will have to cast “provisional’’ ballots. These are set aside and not counted until after the records are checked, after all the other counting.

And that, she said, means it will take even longer to get election results.

That could be a lot.

About 1.9 million people cast early ballots in November out of the more than 2.4 million who voted. And of those early ballots, about 230,000 were dropped off on Election Day.

The debate at one point got heated when Mendez said it isn’t necessary for legislation to target one class of people to have the effect of disenfranchising voters.

“Have you all not heard about the new Jim Crow?’’ he asked.

“This is how things work,’’ Mendez said, saying the key is not whether a measure says certain people can’t vote but how it actually plays out in real life. And he said all legislation should be analyzed “so we could essentially find out how racist these bills are, how some of these bills can have unintended consequences.’’

Mesnard shot back that Mendez was saying some lawmakers could be supporting the bill for racist reasons. And that, he said, violates Senate rules.

Quezada, however, said Mesnard was the one who is off base.

“It’s absolutely not improper to impugn the language of a bill itself,’’ he said.

The measure still needs a roll-call vote before going to the House.