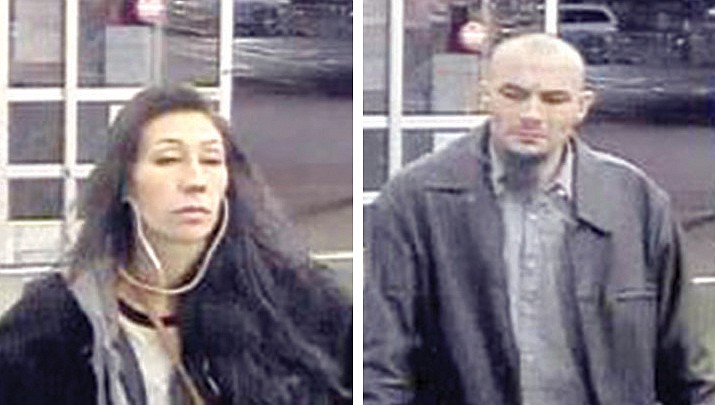 The Prescott Valley Police Department is asking the public to help identify these two individuals. The man is suspected of stealing merchandise from Walmart stores in Prescott, Prescott Valley and Glendale in Jan. The woman is believed to have helped the man commit the Glendale theft on Jan. 19.

An unknown male suspect connected to multiple Walmart thefts in Arizona that occurred between Jan. 19 and Jan. 21. In this surveillance photo, he is shown at a Walmart in Prescott at about 6 p.m. Monday, Jan. 21.

An unknown female suspect connected to a Walmart theft in Glendale on Saturday, Jan. 19.

The Prescott Valley Police Department (PVPD) is seeking the public’s help to identify a man and woman in connection to recent shoplifting thefts at Walmart stores in Prescott Valley, Prescott and Glendale.

The two suspects were first spotted on surveillance video leaving a Walmart in Glendale on Saturday, Jan. 19, with about $1,300 in stolen merchandise, said PVPD spokesperson James Risinger. As soon as they exited the store, they took the items to a waiting vehicle out of view nearby.

The next day, Jan. 20, a resident reported a Walmart cart filled with more than $3,200 worth of merchandise behind the Maverik convenience store north of the Walmart in Prescott Valley, Risinger said. The resident returned the merchandise to the store. Subsequent reviews of store video showed a man fitting the description of the Glendale theft suspect pry open an emergency exit door on the building’s north side, disable the alarm and walk northwest in the direction the merchandise was later found.

A similar instance occurred at a Prescott Walmart on Monday, Jan. 21, Risinger said. Video showed what appeared to be the same suspect drive up to the store in a dark-colored four-door vehicle. The man filled a cart with items from several departments and then entered the garden center, disabled the locked door alarm and left with more than $1,271 in merchandise.

“If you have any information regarding the identity of the male or female, please contact the Prescott Valley Police Department at 928-772-9267,” Risinger said.