US says 2 states must finish Colorado River drought plan
Arizona, California still have work to do 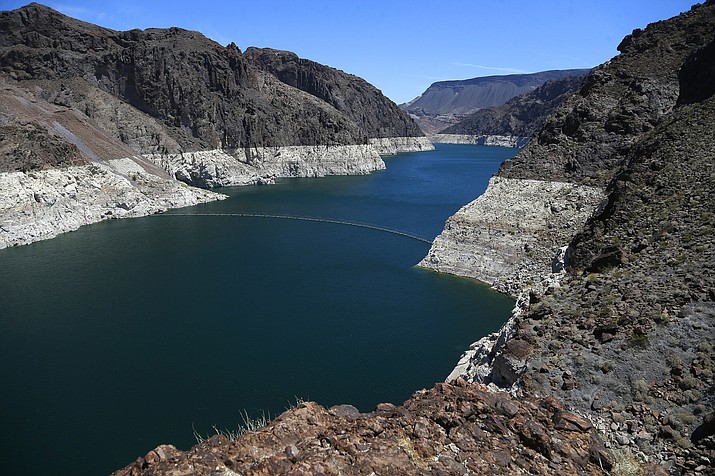 Two states in the U.S. West have work to do on a plan to combat the shrinking supply of Colorado River water that 40 million people depend on but that's threatened by a prolonged drought, a federal official said Friday.

Complex agreements among water users in California and Arizona haven't been signed, U.S. Bureau of Reclamation Commissioner Brenda Burman said. She declared that the states missed her Thursday deadline to complete the work, which could allow the federal government to step in and decide the rules.

But Burman said she prefers the seven states that rely on the river to reach a consensus on protecting the water that serves 5.5 million acres of farmland. She said she would halt a process to ask those governors to explain what should happen next if California and Arizona finish all the components of a drought plan by March 4.

"We are close, and I applaud those who have worked to get us close, but only done will protect this basin," she told reporters Friday. "Time to get the job done."

The bureau is part of the Interior Department, which has broad authority to manage water supplies in the Colorado River's lower basin that includes Arizona, California and Nevada.

Utah, New Mexico, Colorado and Wyoming make up the river's upper basin and have approved the drought contingency plans, as has Nevada.

Arizona lawmakers passed legislation late Thursday supporting the drought plan, and Gov. Doug Ducey signed it. Arizona was the only state that required lawmakers to review the plan. Now, water users must sign 15 agreements that address water storage, conservation and other details.

"We have no reason to believe any member of the steering committee, stakeholder in the process would do anything but fulfill their commitment," the governor's chief of staff, Gretchen Conger, said.

The river has two main reservoirs — Lake Mead on the Arizona-Nevada line and Lake Powell upstream — that gauge its health. Their combined storage is at the lowest level since the early 1960s, Burman said. She and others have painted a dire picture, saying that without action, Lake Mead could fall to a level referred to as "dead pool" and none of the lower basin states would get any Colorado River water.

Guidelines now cut water deliveries to Arizona and Nevada when Lake Mead falls to 1,075 feet (328 meters), and it's a real possibility next year. Farmers in central Arizona would suffer the most, and Nevada would take a hit. California would not lose any water because it has senior rights to the water.

The drought plan seeks to spread the cuts more widely and eventually loop in California. Mexico also has agreed to cutbacks. The plan advocates for keeping more water in Lake Mead to keep it from falling drastically.

"We wanted to be proactive, have a plan," said Jeff Kightlinger, general manager of the Metropolitan Water District in California. "We have to step up and work with Arizona. The big, important thing is with the climate change and long-term drought cycle of the American Southwest, people have realized this isn't about priorities, it's about survival."

He was confident Arizona and California would do what's needed to complete the drought plan by March 4.

In California, the work was up to four entities that deliver Colorado River water — the Metropolitan and Coachella Valley water districts, and the Imperial and Palo Verde irrigation districts.

The Imperial Irrigation District has said its approval is contingent on final review of the multistate plan, federal legislation and getting $200 million to manage the Salton Sea. Levels in the state's largest lake created by runoff have exposed a dusty lakebed that worsens air quality when winds sweep into nearby communities.

The district will work to reach a deal, and its board will vote when everything is complete, general manager Henry Martinez said.

"You've got to stick with deadlines or sometimes people won't take you seriously. She wasn't draconian about it," Eklund said.