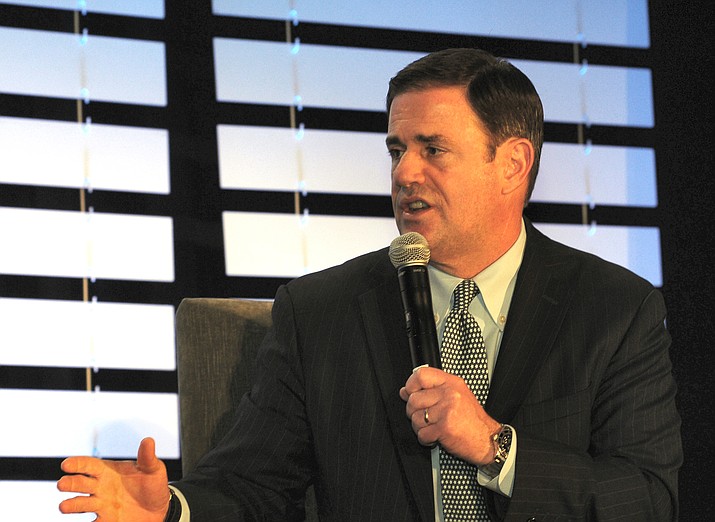 PHOENIX — Gov. Doug Ducey vetoed a legislative plan Friday that would have cut individual income tax rates by $150 million to offset higher taxes Arizonans would have to pay the state due to changes in federal tax laws.

A clearly angry Ducey lashed out at lawmakers from his own Republican Party for refusing to go along with his plan to have the state collect extra cash from Arizona taxpayers by conforming state tax laws and allowable deductions with the changes made in the Internal Revenue Code as part of the federal Tax Cut and Jobs Act signed by President Trump in late 2017.

GOP lawmakers liked the conformity part, a move that simplifies filing for Arizona taxpayers. But unwilling to accept the commensurate boost in state tax collections, they sought to balance that out by cutting income tax rates across the board by 0.11 percentage points.

Ducey, in vetoing the plan, said that creates an “irresponsible measure that hastily changes Arizona’s tax laws without any reliable data to back it up.”

On one hand, Ducey said there’s “plenty of time” to consider the issue and find ways to simplify the state tax code — for 2019 and beyond.

But he also said that he’s determined to get his way on the 2018 taxes that are due April 15.

The governor pointed out that the state Department of Revenue already has prepared tax forms for 2018. Those forms conform with changes in federal law, providing the state with what some lawmakers say is that improper $150 million “windfall.”

“Let me be VERY CLEAR on this point: I will veto any budget that doesn’t align with these tax forms,” he said.

“But last year is settled,” he said.

But Rep. Ben Toma, R-Peoria, who chairs the House Ways and Means Committee, told Capitol Media Services the governor is sadly mistaken if he thinks GOP lawmakers who control both the House and Senate intend to approve any plan to hike taxes.

“I’m not going to vote for that, nor will I hear it in Ways and Means,” he said.

That’s also the position of Sen. J.D. Mesnard, R-Chandler, who chairs the Senate Finance Committee and crafted the idea of the offset to ensure the state is not collecting more money.

“He wants what would amount to, on the individual income tax side of things, the largest tax increase in modern history, as far as I can tell,” Mesnard said of the governor.

Toma pointed out that those tax forms to which Ducey referred — the ones that are currently being distributed and Arizonans are asked to fill out — are based on state tax laws as the governor wishes them to be, but not as they actually read.

“DoR is going to be collecting taxes that they’re not allowed to collect, that they won’t have any statutory authority to collect,” he said.

“What is happening now is outside the scope of the law,” echoed Mesnard.

No one from the governor’s office would comment about the forms being distributed not reflecting the law.

What’s causing the problem is that, in general, Arizona allows its taxpayers the same deductions as permitted in federal law. So if interest paid in home mortgages can be deducted from someone’s federal taxable income — the amount against which taxes are computed — the same deduction is available when computing state taxable income.

Only thing is the new federal law eliminated or curbed many deductions. The trade-off, however, was a sharp increase in the federal standard deduction available to those who choose not to itemize.

But in Arizona, where the standard deduction remains unchanged, following suit as Ducey proposed means fewer deductions and, by extension, higher taxes owed.

Legislative budget staffers looked at the changes, including a $10,000 cap on deductions for state and local taxes paid and a repeal of a miscellaneous expenses deduction. All totaled they figured conforming with federal law would mean Arizonans, without the deductions, would end up paying $157 million in additional taxes.

So GOP lawmakers voted to conform to the changes in federal law, keeping tax filing simple for Arizonans as Ducey suggested, but offset those additional revenues by reducing tax rates across the board by 0.11 percentage points.

By definition, the highest dollar cuts would go to those who owe the most.

Projections by the Arizona Center for Economic Progress put the effect of a 0.11 percentage point reduction in state tax rates at $1,174 for the top 1 percent of Arizona wage earners, meaning those with income averaging $1.45 million. By contrast, it says the lowest 20 percent, those earning less than $23,688, would see their income taxes go down by about $9.

It is that offset sought by GOP lawmakers that made the legislation unacceptable to the governor as he wanted the extra cash to be deposited into the state’s “rainy-day” fund.

Bypassing Ducey appears to be off the table.

It takes a two-thirds vote of both the House and Senate for an override. But the legislation Ducey vetoed passed the House on a 31-29 party-line vote; in the Senate, only Republican Kate Brophy McGee of Phoenix was in opposition as it was approved there by a 16-14 margin.

“It really puts everybody between a rock and a hard place,” Toma said.

One option, he said, would be for Ducey to “buy votes” from the Democrats, all of whom want the state to collect the extra dollars. That likely would involve putting spending items in the budget attractive to the minority party.

But even then, Ducey would still need more Republicans than Brophy McGee to get his way. And Toma said that will throw a monkey wrench into other legislative priorities — and to finishing the session on schedule in late April.

“I think we should all be ready to be here through June,” he said.

Mesnard pointed out there’s another option, one that Ducey can’t veto: do nothing. That would maintain all the same deductions for 2018 that Arizonans were able to take in 2017, meaning no net increase in what Arizonans owe the state based on the latest changes in federal law.

But it could prove an administrative nightmare.

“If we end the session without conforming it won’t matter that the Department of Revenue has printed forms that assumed we did,” Mesnard said, and Arizonans used them to file their taxes by April 15. He said the agency will have to not just re-do the forms but issue notices to everyone who used the original form that they now either owe more money or perhaps are in line for a bigger refund than they originally thought.

There was no response from Ducey or his staffers to that possibility.

Ducey’s claim that it’s too late now to consider how best to conform the 2018 state tax code to federal changes is undermined by the fact that he has known about this for more than a year. In fact, Mesnard first broached the subject in January 2018 and the governor’s spokesman at the time declined to comment on what his boss wanted to do.

During debate on the measure Thursday, Rep. John Allen, R-Scottsdale, chided Ducey for wanting to boost tax collections by another $150 million,

“We are faced today with an almost $1 billion government surplus,” he said. “We are looking at a bill here to say, out of that, $200 million of it should to back to hard-working Arizona families for the real investment that makes our economy go.”

Rep. Mark Finchem, R-Oro Valley, said it’s not right for the state to benefit from a tax cut at the federal level.

“We’ve got the opportunity now to make sure that we are not taking what the federal tax code put back into the pocket of taxpayers,” he said.