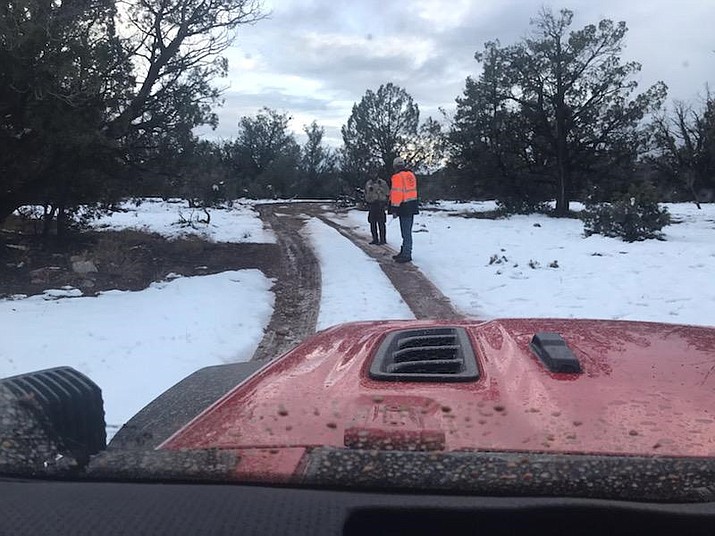 Deputies with the Yavapai County Sheriff’s Office (YCSO) were dispatched to the Juniper Woods community south of Ash Fork Dec. 27 at about 9:15 a.m. regarding the report of a missing 57-year-old man, who rescuers later found in an abandoned camper shell.

The caller, who was making initial contact with the police at the time, said his roommate had been missing since the previous afternoon, when he had walked away from a trailer on their property and could not be found.

A YCSO Forest Patrol deputy called out members of the Yavapai County Search and Rescue Team’s (YCSRT) 4x4 and Back Country units. 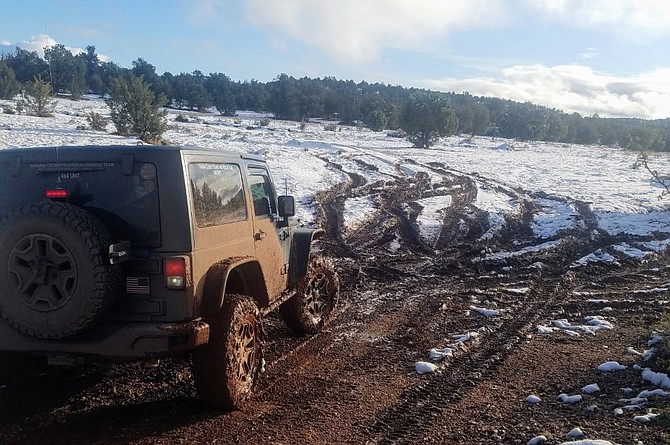 A vehicle with a Yavapai County Search and Rescue Team travels along a muddy road in search of a missing Ash Fork man on Dec. 27, 2019. (YCSO/Courtesy)

The Back Country team began tracking probable footprints in snow and mud which led north through rugged juniper terrain. The 4x4 team worked a containment search, intending to eliminate possible routes leading away from the missing man’s last known position.

Rescuers noted several roads were extremely muddy and rutted in many areas, which provided a challenge to the teams. As the day was nearing sunset with a pending snowstorm soon to arrive, rescuers found him inside an abandoned camper shell at an old hunting camp. He had spent the previous night huddled next to a small campfire he managed to build, and had been without food and water since the previous day.

When found, the man was shivering and exhibiting confusion and weakness resulting from apparent hypothermia. Rescuers learned he had been trying to walk back to his trailer, but did not realize he was going in the wrong direction.

“Another night in these conditions would have been extremely difficult with limited chances of survivability,” YSO spokesman Dwight D’Evelyn said.

According to YCSO, the following are important takeaways from this incident:

Time is the enemy of survival for search teams. It is critical that contact with police be made quickly once it is determined someone is missing, especially under difficult weather conditions.

Roommates had earlier conducted their own search prior to calling the YCSO and placed themselves at risk as a result.

Lastly, if lost, it is always best to remain stationary and let rescuers come to you. Generally, attempts to ‘self-rescue’ create more difficulty for search teams when you do not remain in one place, while increasing your risk of injury or death when attempting to traverse unfamiliar terrain.