Burrow vs. Hurts: A tantalizing matchup at the Peach Bowl
College Football 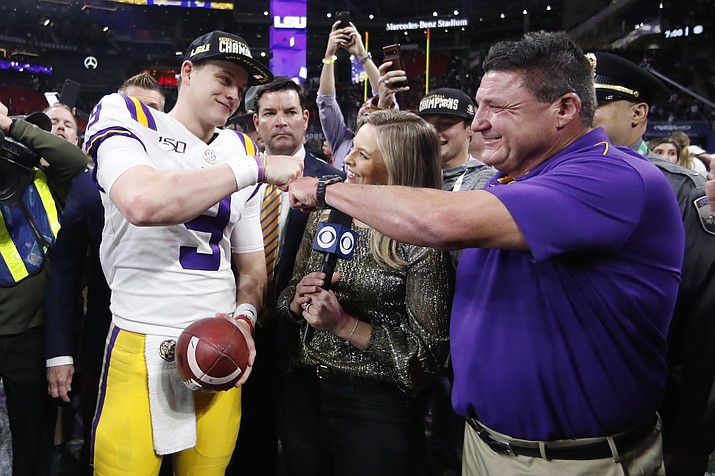 ATLANTA — Joe Burrow needed a year under his belt, along with a coaching change and a new wide-open offense, to really find his way at LSU.

Jalen Hurts didn’t have even that long to adjust, which makes his lone season at Oklahoma even more remarkable.

Now, two transfer quarterbacks who left an inedible mark on their second programs will meet Saturday in the Peach Bowl semifinal playoff game.

The overall matchup looks a bit one-sided — top-ranked LSU (13-0) is a two-touchdown favorite over the No. 4 Sooners (12-1) — but the quarterback duel is downright tantalizing.

Burrow, the runaway winner of the Heisman Trophy, has completed nearly 78% of his passes for 4,715 yards, with a staggering 48 touchdowns and just six interceptions.

“How can you not respect what Joe’s done?” Oklahoma coach Lincoln Riley said. “He’s had a fabulous year. He’s going to be the best quarterback we’ve faced.”

Hurts, the Heisman runner-up, has dazzled with both his right arm and his legs. He’s completed just under 72% of his throws for 3,634 yards, 32 touchdowns and seven interceptions — and leads his team in rushing with 1,255 yards and 18 TDs.

Both star quarterbacks took circuitous routes to get where they are.

Burrow, who left Ohio State after failing to earn a starting job, played solidly for LSU in 2018. He became a full-fledged star when the Tigers committed to the spread offense and hired Joe Brady away from the New Orleans Saints to serve as passing game coordinator. 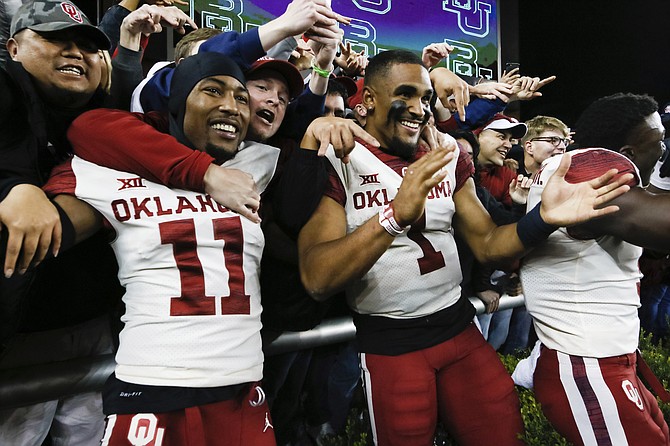 While Burrow, an Ohio native, has fit comfortably into the Louisiana lifestyle — memorably, he donned a jersey that spelled his name “Burreaux” for senior night — Hurts faced a more difficult adjustment after transferring to Oklahoma from Alabama.

Guarded and not very vocal, Hurts won over his teammates and coaching staff with his stunning play on the field.

“Respect is earned, not given,” Hurts said. “When you’re with a group of men in a new setting, you don’t know any of them, you’re the quarterback, you’re trying to earn their respect, you go in there and lead by example and just do your job. If they wish to follow you, they do. They followed.”

Hurts led Alabama to the national championship game his first two seasons, only to lose the starting job to Tua Tagovailoa. After watching from the bench as a junior, he graduated early and transferred to Oklahoma to play one more year.

“It’s been an ongoing process,” Hurts said. “Taking a leap of faith is probably the best way I can put it.”

Now, Hurts is back in the playoffs with his new school, while the Crimson Tide missed out for the first time since the format was launched in 2014.

If Hurts is feeling some satisfaction on the inside, he certainly doesn’t show it.

“It’s just great to have an opportunity to play for another national championship,” he said. “That’s what we’ve worked for. We’ve worked for this moment right here.”

Some things to watch for in the Peach Bowl:

LSU may have to go without All-Southeastern Conference running back Clyde Edwards-Helaire, who has an injured hamstring.

Edwards-Helaire was not able to practice all week and his availability will be a game-time decision.

“Obviously, if Clyde’s ready to play, we’re going to let him play,” Orgeron said Friday. “Do I think he plays? Yeah. How much he plays, I don’t know. That’s still got a ways to go there. He’s still a little sore. He’s not 100 percent healthy, obviously.”

Edwards-Helaire has 1,689 yards and 17 touchdowns, mostly as a runner but also as a receiving threat out of the backfield.

Oklahoma is a playoff regular, but t he Sooners have yet to win a semifinal game in three previous appearances.

They were beaten the last two years by SEC powers Alabama and Georgia.

Riley doesn’t think recent history will have an impact on this year’s game.

“Each team is its own team,” he said. “Those other games are so far away in the past.”

Both teams have dynamic wide receivers.

Oklahoma counters with CeeDee Lamb, who has 14 touchdown catches and averages 20.8 yards per reception. He has six career games with at least 160 yards receiving.

If Oklahoma is going to have any success slowing LSU’s dynamic offense, middle linebacker Kenneth Murray must have a big game.

He’s been a key to the Sooners’ improvement on defense in 2019, recording four sacks and 16 tackles for loss.

Murray’s speed and big-play skills will be tested by Burrow, who has thrived on run-pass-option plays out of the spread offense.

LSU struggled defensively for much of the season, notably giving up 614 yards in a 58-37 victory over Ole Miss in mid-November.

Since then, the Tigers have shown vast improvement. They gave up a single touchdown to Texas A&M and totally shut down Georgia in the SEC championship game, romping to a 37-10 victory.

Safety Grant Delpit leads the unit. The Thorpe Award winner as the nation’s top defensive back, he has two interceptions and 56 tackles.