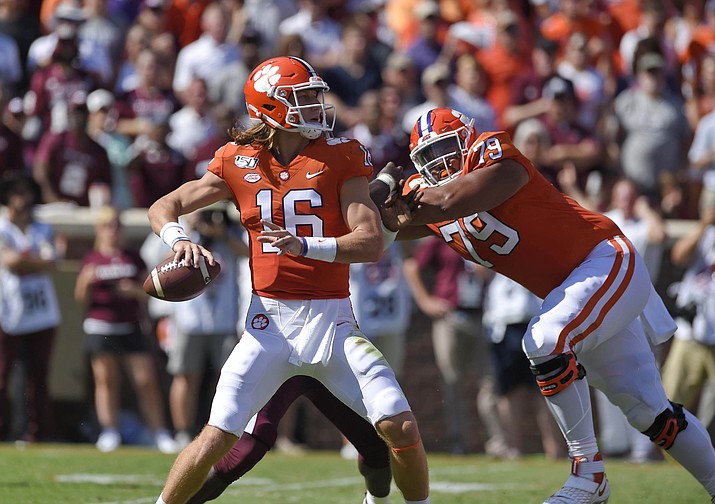 This Sept. 7, 2019, file photo shows Clemson quarterback Trevor Lawrence dropping back to pass with blocking help from Jackson Carman (79) during the second half of an NCAA college football game in Clemson, S.C. Carman is one of the few recent five-star recruits from Ohio who didn't end up at Ohio State. Now the two schools meet in the CFP semifinals, where Carman will be matched up against Ohio State's star defensive lineman Chase Young. (Richard Shiro/AP, file)

SCOTTSDALE — Jackson Carman had a few good options when deciding where to play college football, including Ohio State.

Unlike many highly-rated recruits from Ohio, the offensive lineman decided to leave the Buckeye State.

Now Carman's the starting left tackle for Clemson and will have arguably the toughest assignment on the field on Saturday in the College Football Playoff semifinals. The 6-foot-5, 345-pound sophomore has to block Ohio State's Chase Young, a Heisman finalist who has 16 1/2 sacks this season.

“Our strength is our offensive line; their strength is their defensive line,” Swinney said. "And everybody gets kind of enamored with the quarterbacks and the wideouts and those defensive backs and all that stuff and these great backs, but that will be quite a battle right there to watch all night long."

Carman is from Fairfield, Ohio, just outside Cincinnati. He was recruited by Ohio State and met Young a few times, though they never became close. The biggest reason is obvious: Carman felt more at home with the Tigers, and it's hard to argue he made a bad decision.

Clemson has won 28 straight games since he arrived on campus and he's been a big part of its success. He moved into a starting role at left tackle this season.

Quarterback Trevor Lawrence said he has complete trust in Carman's ability to block one of the college game's elite players.

“Me and Jackson have been really close since we got here," Lawrence said. "We came in together. Along with everyone up front, I really trust him. This offseason, fall camp, how we've jelled and ironed out the rough things. I feel like we're playing our best right now and especially Jackson, he's going a really good job.”

Carman said he's not surprised his college career will intersect with the Buckeyes.

“I definitely thought it was a possibility," Carman said. “They're both really good programs and title contenders every year.”

The 6-foot-5, 265-pound Young is expected to be one of the top picks in the NFL draft in April. He's had some huge games over the two months, including four sacks against Wisconsin and three more against Penn State.

“Every week he's doing something crazy — having four sacks or something like that,” Carman said.

He added: “Usually people who are athletic specimens like him aren't necessarily the most refined with their technique because they can rely on being better than everyone else physically. But he's really done a great job with his technique and his coaching.”

Young wasn't quite as productive in his past two games against Michigan and in the Big Ten championship game against Wisconsin. But that's because the Wolverines and Badgers often used double-teams — or sometimes even triple-teams — to try and limit his impact.

Young said he's fine with that, especially because it left other Buckeyes free to make plays and they still won both games.

As for Carman, Young called him a “good young player” but said he was more worried about the entire Clemson offense than an individual lineman.

“They're all pretty good, man,” Young said. “They're all guys who can go. So it's our job to just do our job and do it the best we can.”

Former Ohio State coach Urban Meyer was in Scottsdale on Thursday and said he's extremely impressed with the job current Buckeyes coach Ryan Day has done in his first season.

That said, he isn't surprised.

“You knew after one year with him, he was elite," Meyer said.

Day joined Meyer's staff in 2017 as the co-offensive coordinator and was promoted to head coach after Meyer stepped down following last year's Rose Bowl. The 40-year-old Day still hasn't lost.

But Meyer said Clemson presents a bigger challenge for undefeated Ohio State than anything it's seen this season. He added the same goes for the Tigers, who mostly cruised through their ACC schedule.

Now he believes both teams will finally be engaged in a fair fight.

“I know what Ryan Day's worried about — the first seven minutes of the game,” Meyer said. “Let everybody settle down, get their feet in the ground. The environment is going to be incredible. Just calm down and let them play."

Meyer said he's been involved in similar games and there's no way to simulate facing a team as talented as Clemson.

Ohio State quarterback Justin Fields was not giving any more updates on his knee heading into the semifinal against Clemson. On Tuesday, Fields had said he was abut 80 to 85 percent.

There were a few follow-up questions on Thursday, but the sophomore politely shut those down. He did say, somewhat tentatively, that he planned to wear a brace on his left knee in Saturday's game.

DABO IN THE DESERT

Clemson coach Dabo Swinney's had some good moments in the desert, including a 2016 win over Ohio State in the CFP semifinals.

He's also had some bad ones, like losing to Alabama in the CFP title game the year before.

But he's maintained his love for Arizona despite the up-and-downs since it's so different from where he grew up in Alabama.

“Every time I get on the bus you see the mountains, see the cactus," Swinney said. "There's not many cactus in Alabama. I used to watch Westerns with my dad all the time growing up and that's what it reminds me of. It feels like you're in cowboy land or something. It's pretty cool.”