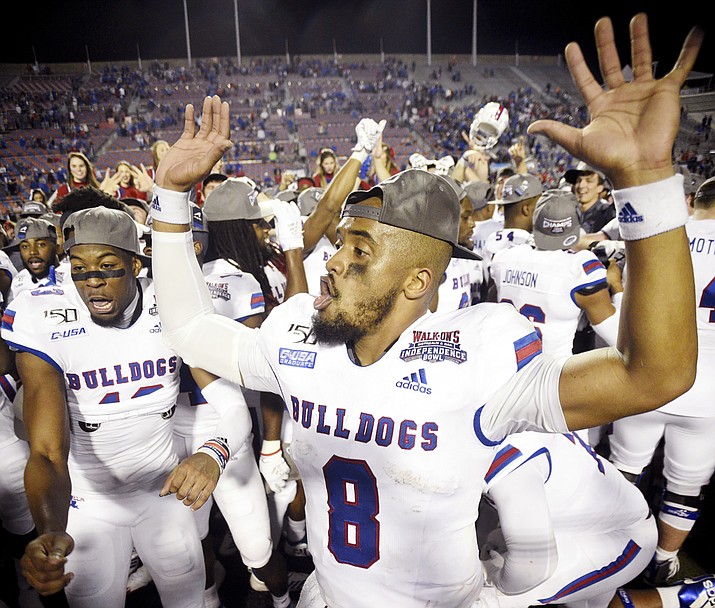 SHREVEPORT, La — J'Mar Smith threw a touchdown pass and had a late scoring run to help Louisiana Tech beat Miami 14-0 on Thursday night in the only shutout in the Independence Bowl's 44-game history.

Louisiana Tech (10-3) reached double-digit victories for the first time since 1984 and ran its postseason winning streak to six — the longest current streak in the country.

"To have the 10-win season and to beat a Power 5 team in a bowl game, I can't put into words my feelings and my emotions for what these players have accomplished," coach Skip Holtz said.

Miami (6-7) completed its second losing season in 12 years. The Hurricanes have lost nine of 10 bowl games.

According to Stats Inc., the Bulldogs became the first Group of 5 program to shut out a Power 5 school in a bowl game since the beginning of the BCS/College Football Playoff era in 1998.

"I can't fault the efforts of our players. I'm certainly proud of the way we played defensively — they had their backs against the wall all night," Hurricanes coach Manny Diaz said. "Our inability to sustain drives on offense gave us no chance to win this football game."

Smith connected with Israel Tucker on a 26-yard touchdown strike on a screen pass in the second quarter, capping a 13-play, 91-yard drive. Smith added an 8-yard scoring run with 1:15 left.

Bulldogs running back Justin Henderson was selected the Most Outstanding Offensive Player after rushing for 95 yards on 22 carries. Smith completed 13 of 28 passes for 163 yards with one interception.

Miami entered the game with the nation's worst third-down conversion percentage, and going 5 for 14 on Thursday won't help that much. The Hurricanes finished the year with three straight losses and averaging only 25.7 points per game. It raises more questions about the future of offensive coordinator Dan Enos, whose lone season with the Hurricanes saw the offense perform well below expectations.

The teams set the game record for punts at 18, with both tying the single-club record of nine.

The Bulldogs won 70 miles west of their campus in Ruston.

"I'm really proud of the experience to have that many fans here when we ran out of the tunnel — to see all the red and blue in the stands was awesome," Holtz said.

Louisiana Tech: The season will forever be tainted by "what if" for the Bulldogs. Following a season-opening loss at Texas, Louisiana Tech rattled off eight straight wins before Smith was suspended two games for violating an undisclosed program policy. The Bulldogs lost those two games and won the regular-season finale when Smith returned. What if Louisiana Tech would have run the table? Could it have challenged Memphis for the Group of 5 slot in the College Football Playoff's New Year's Six?

Miami: During bowl week, Hurricanes coach Manny Diaz said the "plan" wasn't to play three quarterbacks. Sure enough, Miami played three quarterbacks — Jarren Williams, Tate Martell, N'Kosi Perry — and found no success. Perry, who didn't play until the fourth quarter, showed the most promise through the air, although none of the three threw for 100 yards.

END OF AN ERA

Thursday marked the final year of the bowl's contracts with the Atlantic Coast Conference and the Southeastern Conference. Beginning in 2020, the game will feature a rotation with the Pac-12, Conference USA, American Athletic Conference and major independents, such as Army and BYU.

THREE QBs OR NONE?

Diaz vowed against playing three quarterbacks Thursday. However, that's what happened when Miami couldn't muster any offense. Jarren Williams, Tate Martell, N'Kosi Perry all played with little success. Not one threw for 100 yards. The Hurricanes combined to go 15 of 34 for 153 yards and two interceptions.

"We were trying to make explosive plays," Diaz said. "I thought we were going to throw the ball a lot better than we did."

It was Holtz's second 10-win season, and first at the FBS level. He led Connecticut to a 10-win season when the Huskies played in what was then known as Division I-AA in 1998.