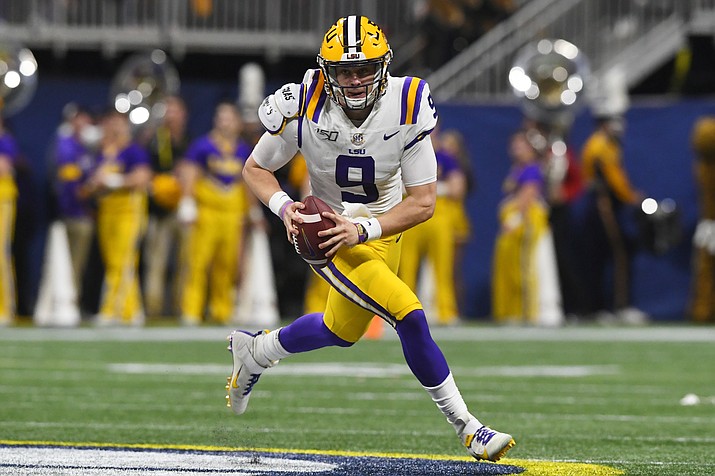 LSU quarterback Joe Burrow (9) runs down field against Georgia during the first half of the Southeastern Conference championship game, Saturday, Dec. 7, 2019, in Atlanta. (John Amis/AP)

The four College Football Playoff teams rank in the top five nationally in points per game and yards per game.

For defenses to determine who wins this championship, there might be a turnover here, a sack there and a couple of clutch red-zone stops.

Coaches who faced each team say there are several key matchups that could decide Saturday’s semifinals:

WHEN LSU HAS THE BALL

Coaches like to talk about being aggressive offensively. That’s how Heisman Trophy winner Joe Burrow and the Tigers play.

“Whether it’s by tempo or by play design, they maintain their aggressiveness from play one until the last play of the game,” Mississippi State coach Joe Moorhead said.

The Tigers often have five receivers on the field, relying on their front five to pass protect and Burrow’s decision-making and mobility to avoid pressure. LSU’s top three wide receivers (All-American Ja’Marr Chase, Justin Jefferson and Terrace Marshall Jr.) each have at least 10 touchdown catches.

Versatile running back Clyde Edwards-Helaire (50 catches and 1,290 yards rushing) is used frequently in the passing game as more than just an outlet for Burrow.

“Even when you include the tight end (Thaddeus Moss), all their guys can win the one-on-one matchups,” Moorhead said.

Edwards-Helaire is nursing a hamstring injury and might not play. His versatility would be missed, though probably not as much as Oklahoma will miss defensive end Ronnie Perkins.

Perkins, who leads the Sooners in sacks with six, is reportedly suspended for the playoff.

“The key to their defense is really to get pressure with their front, the line movement and the twists and all the things they do,” Baylor coach Matt Rhule said of the Sooners. “I think the loss of (Perkins) is really a big deal.”

WHEN OKLAHOMA HAS THE BALL

If fans expect a typical fast-paced Big 12 offense, the Sooners might surprise them.

“They are not a high-flying tempo offense. They are pro-style, substitute personnel groupings, call two plays, getting into the right play at the line. As a result they can limit possessions,” Rhule said.

Oklahoma’s offenses under coach Lincoln Riley have always been balanced and among the best in the country on the ground. With Heisman runner-up Jalen Hurts, the quarterback is now the Sooners’ primary ball carrier. The powerful senior ran for 1,255 yards behind a huge offensive line. Kennedy Brooks is the top tailback. Injuries and suspensions have depleted the depth behind him. Expect a lot of Hurts and Brooks, setting up play-action passes to All-America receiver CeeDee Lamb.

The Sooners don’t have much chance of holding down LSU’s offense without getting a bunch of turnovers. Slowing down the game might be OU’s best bet.

But LSU’s defense is healthier than it’s been all season and their big bodies up front (Glen Logan, Tyler Shelvin and Rashard Lawrence all weigh over 300 pounds) are hard to move.

WHEN OHIO STATE HAS THE BALL

QB Justin Fields (40 touchdown passes and one interception) was a Heisman finalist, but J.K. Dobbins might be the Buckeyes’ offensive MVP.

“He is the catalyst,” Cincinnati coach Luke Fickell said of Dobbins.

Dobbins is tough inside and out and ran for 1,829 and 20 touchdowns. He is also effective as a receiver with 17 catches for 200 yards and two scores.

Dobbins will be attacking a Clemson defense that has been overhauled by coordinator Brent Venables this year. The Tigers don’t dominate with their front four as they did last year. The back end of the defense is where the stars are, especially versatile All-American Isaiah Simmons. He is listed as a linebacker but shows up all over the field.

“They’ve evolved to kind of a three-safety defense,” Wake Forest coach Dave Clawson said. “They blitz a lot of more. They pressure a lot more.”

And they rely on cornerbacks A.J. Terrell and Derion Kendrick to win on the outside against receivers.

Venables is not afraid to commit extra defenders to stop the run. That’s where Fields’ running ability can come in. A sore knee kept the 6-3, 225-pound Fields (10 touchdown runs) under wraps in the Big Ten championship game against Wisconsin.

“I think there’s still a little bit more in the arsenal,” Fickell said.

WHEN CLEMSON HAS THE BALL

The Tigers are making their fifth straight playoff appearance and have won two national titles in the last three years.

Still, this is the best Clemson offense the Tigers have had entering the playoff. The Tigers have gone from solid to elite along the line, led by second-team All-America guard John Simpson and sophomore left tackle Jackson Carman.

“If you ever try to lighten the box now you’re dealing with a great offensive line and Travis Etienne” (1.500 yards rushing and 8.24 per carry), Clawson said.

That line, especially Carman, will be tested by college football’s best pass rusher. Heisman finalist Chase Young had 16.5 sacks in 11 games. As teams began scheming to slow down Young, Ohio State moved him around the formation, particularly on third down.

Extra attention on Young means defensive linemen Davon Hamilton and Jashon Cornell have to be handled one-on-one. The Buckeyes challenge will be to get enough pressure to fluster Trevor Lawrence.

“I don’t know that they have another dynamic rush guy,” Fickell said. “They’ve got some really, really good ones.”

Lawrence led Clemson to a national title last year as a freshman. He has pinpoint accuracy and big targets in Tee Higgins and Justyn Ross, both 6-4. The Buckeyes are used to cornerbacks Jeff Okudah, an All-American, and Damon Arnette locking down outside receivers. That might be too much to expect against Clemson, which has confidence in Lawrence to work the middle of the field like few other college quarterbacks do.