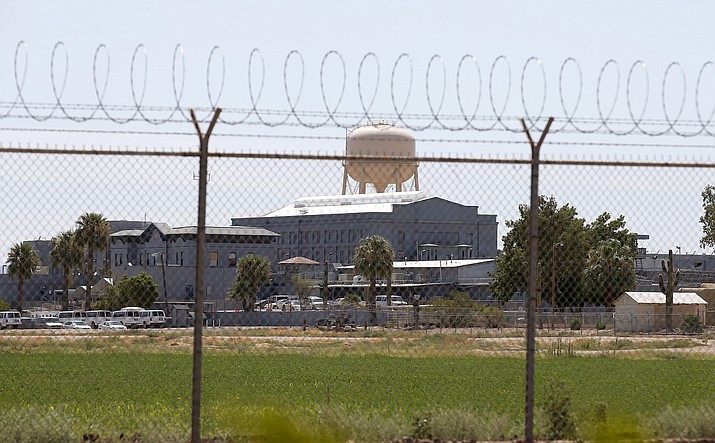 In this 2014 file photo, a fence surrounds the state prison in Florence, Arizona. An organization that has been seeking prison reform for years has now decided to ask voters to do what lawmakers and the governor so far will not: revamp the so-called “truth in sentencing” laws. (AP photo, file)

PHOENIX — An organization that has been seeking prison reform for years has now decided to ask voters to do what lawmakers and the governor so far will not: revamp the so-called “truth in sentencing’’ laws.

The proposal by the American Friends Service Committee would keep the laws that set out minimum, presumptive and maximum sentences for various crimes. But it would allow judges to impose lower prison terms in cases of “non-dangerous offenses’’ when it is “in the interest of justice.’’

Another provision of the initiative would allow inmates sentenced for non-dangerous offenses to be released after serving 50 percent of their time. Now the minimum is 85 percent.

And it would end the practice by some prosecutors of “stacking’’ charges in a way that allows someone to be sentenced as a repeat offender even if they have no prior convictions.

Joe Watson, spokesman for AFSC, a Quaker organization, noted there appears to be some interest among lawmakers into revisiting sentencing laws as the number of people in state-run prisons exceeds 34,000. And that doesn’t count another 8,330 who are in private prisons at state expense.

That puts the state’s incarceration rate according to multiple sources at the fourth highest in the nation, exceeded by only Mississippi, Oklahoma and Louisiana.

Some legislators also are taking note of the fact that nearly 10 percent of the $11.9 billion state operating budget goes to running the Department of Corrections, with spending on incarceration up nearly 34 percent in the past decade.

But Watson told Capitol Media Services he and his organization are not confident there will be real reform.

“There’s been this bait and switch that’s happened for several years,’’ he said of efforts to revamp the sentencing process. “And so if they can’t get something done yet again in the next session, then we’ll leave it to voters to do what’s right.’’

She told Capitol Media Services she is still reviewing what is in the initiative. But LaWall said

changes like this need to be reviewed and made by legislators and not by initiative.

“There are unintended consequences for all kinds of things that need to be studied and pointed out,’’ she said.

LaWall did not dispute that efforts at major changes in sentencing laws have not gotten far at the Capitol. But she said that’s no excuse to have them decided at the ballot box.

And she said a legislative process gives crime victims a chance to have their views heard.

The state’s current policies on incarceration date back to 1978 when lawmakers voted to impose mandatory prison terms for certain crimes. And in 1993 they approved “truth in sentencing’’ law which says criminals must serve at least 85 percent of their term before being eligible for release.

Watson said the changes being sought at “not all that revolutionary.’’

He said judges used to have more discretion to judges to determine what is an appropriate sentence for a specific individual.

“Now that all comes from prosecutors,’’ Watson said.

He acknowledged that the reason truth in sentencing -- and that 85 percent requirement -- was enacted because people were not serving anywhere near the number of years in prison to which they had been sentenced.

Watson said that mass incarceration continues even though figures from the FBI show violent crime in Arizona is dropping -- down 4.5 percent between 2017 and 2018 -- and is below the national rate.

“It’s the tough-on-crime mentality that has sent people who suffer from drug addiction, substance abuse issues (to prison) believing that those people were a danger to the community,’’ Watson said, whether they’re charged with a drug offense or some other offense to get the finances to purchase their drugs.

“What this initiative would do is give folks that opportunity to earn more time off of that sentence,’’ Watson said, providing incentives for inmates to participate in programs while behind bars.

“Instead of going in and everybody being told that you’re going to be getting out at 85 percent, regardless of what you do to rehabilitate yourself, now you’re going to have these opportunities to go through substance abuse treatment, to go through programming, to pursue your GED, to exhibit good behavior while incarcerated.’’

Watson has some personal experience.

The former write for Phoenix New Times served a decade in state prison after being convicted of a string of robberies linked to his gambling addiction. He was released from custody in June 2017 after serving 85 percent of his term and finished his probation earlier this year.

There is some precedent for the change the initiative is seeking.

Last year lawmakers approved a measure permitting inmates who have been convicted solely of drug offenses to seek release after serving only 70 percent of their sentences.

The “stacking’’ issue is a bit more complex.

Arizona law always has allowed enhanced sentences for those who are repeat offenders.

Last year the Legislature approved a proposal by Rep. Ben Toma, R-Peoria that would have spelled out that prosecutors may seek the longer sentences only for crimes for which someone actually has been tried and convicted prior to the new offense being charged. That would have removed the “stacking’’ option in a case of an individual who committed three burglaries on three successive days.

But Gov. Doug Ducey, in a one-line letter to legislative leaders, said he was concerned about “the unintended consequences that may arise from this legislation and the affect these changes would have on victims.’’

Talk of the Town: The truth behind Truth in Sentencing
State House votes to limit ability to charge criminal defendants as serial offenders
Talk of the Town: Releasing inmates early would increase crime
State: Arizona prison sentences among toughest in U.S.
Lawmaker pushes for prison reform after costing Arizona $1.2B per year