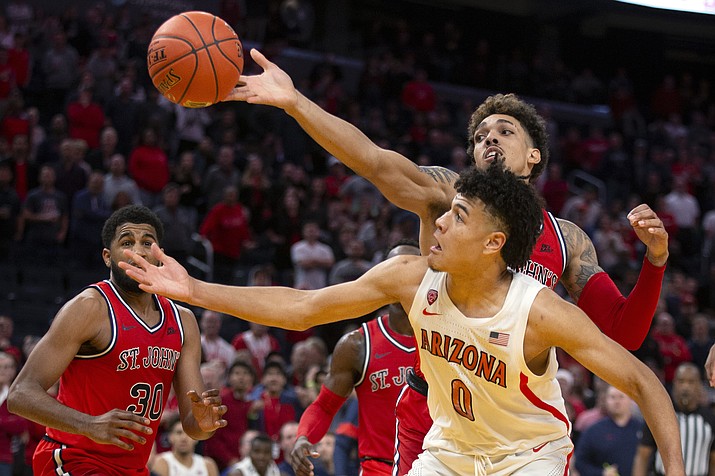 St. John’s led comfortably but had trouble closing out Arizona despite the Wildcats making only two baskets over the final eight minutes. Part of that was because both teams were in double bonus down the stretch. At one point, Arizona scored 14 consecutive points on free throws.

The Red Storm didn’t trail until Max Hazzard made his first shot of the game, a 3-pointer with 1:21 remaining to put the Wildcats ahead 67-66.

After Rutherford scored on a drive down low, Mannion missed a 3-pointer then later came up short on a layup attempt with four seconds left.

Heron continues to be sidelined with a right ankle sprain he suffered Dec. 10 against Brown.

Figueroa bounced back after a poor shooting night against Albany on Wednesday to get the Red Storm off to a fast start. He had 16 points in the first half with a pair of 3s and capped a 6-0 run by making a buzzer-beating one-handed shot that he flipped off the backboard to extend St. John’s lead to 40-26.

St. John’s: The Red Storm were sharp on both ends of the court and only had a few issues late in the second half after getting into foul trouble. The fact that they’ve won twice with Heron has to be encouraging, especially with Big East play opening next week.

Arizona: The Wildcats fell in a big hole early and ran out of steam after their late rally. The good news was that Arizona repeatedly attacked the basket in the second half and got to the free throw line.

Ian Steere scored two points in his debut with St. John’s. Steere missed the first 12 games while sitting out a year after transferring from North Carolina State. Steere played one game for the Wolfpack before transferring.

St. John’s: Hosts No. 17 Butler on Christmas Eve in the Big East opener.s

Arizona: Hosts rival Arizona State in the Pac-12 opener for both teams Jan. 4.