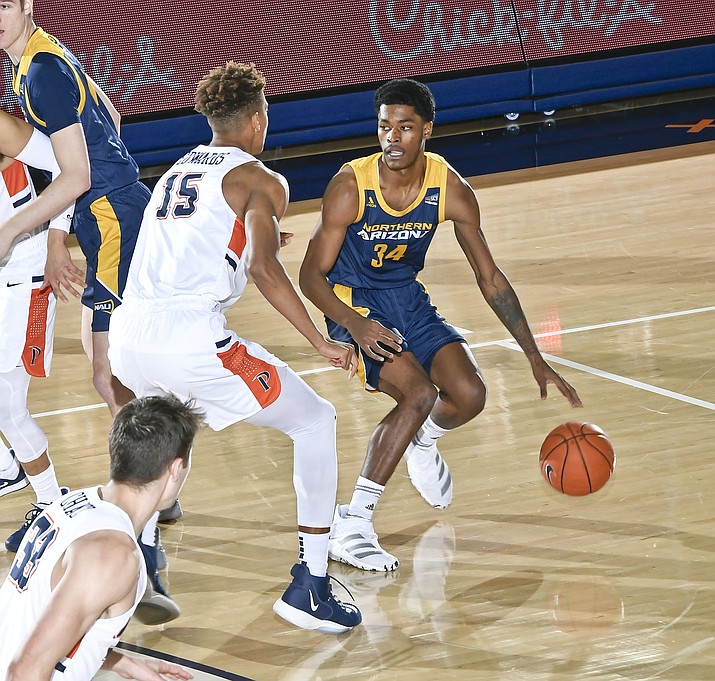 NAU guard Ted McCree (34) surveys the floor in the halfcourt during a non-conference game against Pepperdine on Saturday, Dec. 21, 2019, in Malibu, Calf. (Martin A. Folb, NAU Athletics/Courtesy)

MALIBU, Calif. — Pepperdine stole victory away from the Northern Arizona men’s basketball team’s grasp with a pair of free throws with 6.8 seconds left to emerge with a 75-73 victory on Sunday inside the Firestone Fieldhouse.

The Waves finished the game on an 11-2 run to snap the Lumberjacks’ three-game winning streak. NAU will take a 6-3 record – its best non-conference record in nine years – into conference play beginning next week.

Sophomore Cameron Shelton, who finished with a team-high 18 points, put the ‘Jacks up 71-64 with 3:33 remaining in the game before the Waves scored the next nine points to take a 73-71 advantage with under a minute left. Senior Brooks DeBisschop followed with a layup with 31.3 seconds left to tie the game once again.

After a Pepperdine timeout, the Waves’ Colbey Ross, who scored a game-high 27 points, drew a timeout with 6.8 seconds on the clock. Ross knocked down both free throws and senior Ted McCree’s game-winning three-point attempt was just off the mark before the buzzer.

“We could not get a stop and they went on a scoring run,” said interim head coach Shane Burcar. “It’s a tough loss to take. There’s no shame in losing to Pepperdine, but when you have a lead like that (71-64), it’s tough. We had a couple of bad offensive possessions too, but if we get a stop there, we’d be in pretty good shape.”

Shelton also tallied seven rebounds and seven assists along with his game-high 18 points as he extended his season-opening double-digit scoring streak to nine games. McCree was not far behind with a season-high tying 17 points on five treys, which was also a season-best. DeBisschop and junior Cameron Shelton chipped in 11 and 10 points respectively.

In addition to NAU’s second-half shooting struggles at times, Pepperdine – the nation’s leading free-throw shooting team – got to the line and converted 13-of-15 attempts in the second half.

Still, NAU led for almost the entirety of the second half and withstood a couple of Pepperdine pushes to put the Lumberjacks in position to claim only their second all-time win in Malibu. After Pepperdine got within a single point 57-56 with 11 minutes left, McCree hit three triples in the next five minutes to extend NAU’s lead back out to 69-62.

With its lead at 71-64, NAU turned the ball over on three straight possessions, allowing Pepperdine to take its first edge of the second half with a 9-0 run, setting up the final minute of action.

“The message (to the team) was to keep their head up and let it hurt,” Burcar said. “For true competitors, this will hurt, and that’s a good thing. At the end of the day, we know we have to get back to work in Montana and get ready for those games.”

McCree sparked NAU early with eight points in the first three minutes and change as the Lumberjacks took the initial advantage, 10-8. The Waves settled in though and led by as much as six before a 7-0 Lumberjack run with field goals by freshman Isaiah Lewis, sophomore Nik Mains and Satterwhite.

Shelton then scored seven points during a nine-point surge by the ‘Jacks to give them their largest lead of the game, 37-29, with three minutes to go before the half. He added one more bucket right before halftime to send NAU into the break with a 42-37 advantage.

NAU outrebounded Pepperdine, 28-27, and the Lumberjacks’ reserves – led by Satterwhite and another seven points by junior Bernie Andre – outscored the Waves’ bench by a 25-14 margin. NAU nearly swept the specialty stats with edges in points in the paint (26-22), second chance points (8-2) and fast break points (13-9).

The Lumberjacks will open the conference slate on Saturday, Dec. 28 in Missoula, Mont. versus Montana at 7 p.m. NAU will conclude its stretch of five consecutive road games on Monday, Dec. 30 at Montana State during the first weekend of Big Sky play.