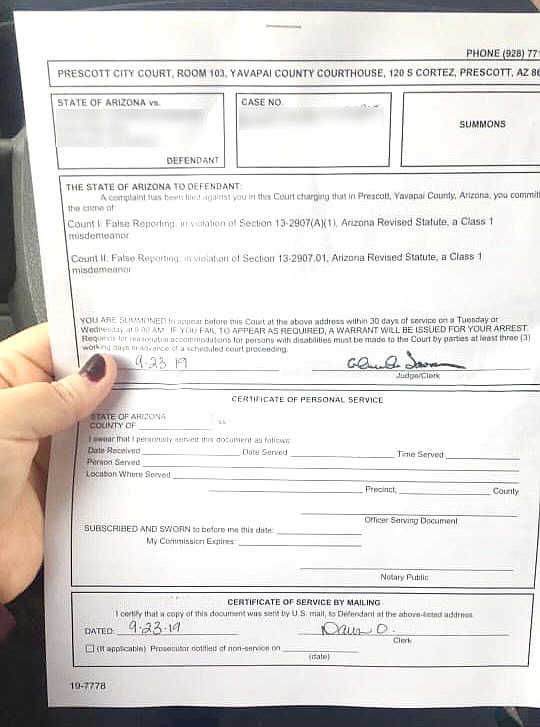 A court summons sent to a Prescott woman stating she has been formally charged with false reporting. The charges were issued by the Prescott Police Department after a month-long investigation into the woman’s report that she was robbed and assaulted in Granite Creek Park on Aug. 28, 2019. (Courtesy)

On Aug. 28, a woman reported to the Prescott Police Department (PPD) that she had been attacked and robbed earlier that day at Granite Creek Park.

She told detectives she was in the park that afternoon with a 5-year-old boy, who she was babysitting, when a man came up behind her, pushed her against her car and demanded money and credit cards.

When she refused to give him anything, he grabbed her shirt, hit her in the face and tried cutting her stomach with a knife, according to her report.

She said the man then fled the area because she began screaming.

Instead of calling 911 immediately, she later drove to the PPD station to make the report in person.

Patrol officers were in the park on another unrelated call when she made the report, so they were able to quickly begin searching for the suspect based on the description the woman provided, said Lt. Jon Brambila with the PPD. No signs of the suspect were found and no one in the area said they witnessed the incident.

“At that time there were several people who were in the park and stated that they had been there all day,” Brambila said.

The case was assigned to two detectives who conducted an extensive and detailed investigation that lasted for almost a month, Brambila said.

During the investigation, the victim began posting on social media about the incident. She included a photo of her face, which appeared to have bruising around her eye and a cut on her lip.

She wrote in her initial post that she had been physically attacked during the attempted robbery and wished to let the public know about it.

Through those posts, a member of the community identified a possible suspect based on her description and the fact that he was contacted by officers in the park that day. That person was identified and interviewed by detectives, but was ruled out as a suspect, Brambila said.

The detectives then started poking more holes in her report.

“The injuries the victim alleged and posted on social media were eventually proven to be fake as she used makeup to create what appeared to be a black eye and the injury to her lip was proven to have occurred while she was babysitting the 5-year-old,” Brambila said.

They also found that the woman has had previous contact with the PPD and other law enforcement agencies where she has made similar claims of being assaulted and similar injuries that could never be substantiated, Brambila said.

The detectives forwarded their case to the City Attorney’s Office for review of charges related to false reporting to law enforcement, a misdemeanor crime. The woman was served with a summons to appear in court. She did and ended up pleading guilty to the charges in early December.

“When someone makes a false report such as this and begins posting on social media, it creates a sense of fear within the community and an atmosphere where actual victims of serious crimes are afraid to come forward to report the incident, fearing that no one will believe them,” Brambila said. “This case was investigated as it should have been and proven to be false.”

The woman’s name is being withheld per company policy, as The Daily Courier generally does not name people in misdemeanor cases.