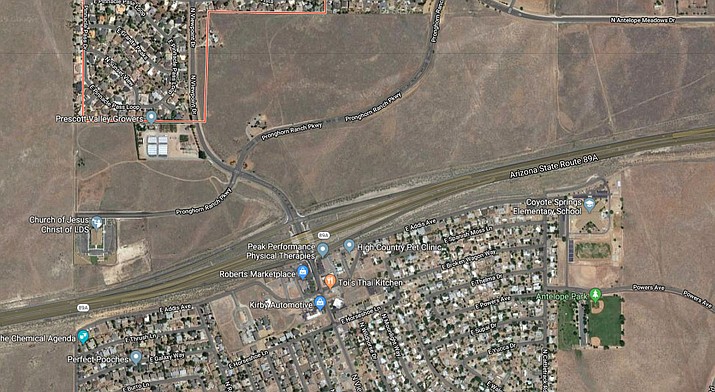 This map shows the approximate location of a proposed 189-home subdivision on both sides of Pronghorn Ranch Parkway south of Antelope Meadows Drive. (Google map screenshot)

The Prescott Valley Town Council will consider whether to approve an amended final plat for a proposed 189-home subdivision on both sides of Pronghorn Ranch Parkway south of Antelope Meadows Drive when it conducts a special meeting today, Dec. 19.

Between about 5:30 and 6 p.m. in the public library’s auditorium, council will review the final development plan for a subdivision called Antelope Park, which would be split into two parcels, including 82 lots on Parcel A and 107 lots on Parcel B.

Before the special meeting, council will meet for a study session at 5:25 p.m., one in which members will discuss “mutual topics of interest with the Town of Prescott Valley’s Congressional Delegates,” according to the meeting’s agenda.

Zoning approvals for these parcels will require, among other things, upgrades to the existing roads there based on an updated Traffic Impact Analysis. Upgrades should accommodate traffic generated by the subdivision, town staffers report.

Staffers added that another southbound traffic lane on Viewpoint Drive, from Highway 89A to Pronghorn Ranch Parkway, will be installed with dedicated turn lanes.

An additional northbound lane on Viewpoint Drive, from 89A to Pronghorn Ranch Parkway, is being planned and would be built jointly by the town and Yavapai County. Town staffers said utilities have been beefed up there to allow for Antelope Park.

The Antelope Park property has a 20-year history with the town. In 1999, Council approved annexing about 155 acres north of Highway 89 with a residential, single-family rural (RCU-70) zoning designation.

Seven years later, in 2006, PV’s Planning and Zoning Commission approved rezoning about 60 acres of the property from RCU-70 to a planned area development (PAD). Council also approved a preliminary plat for 177 lots for what was called Antelope Park.

Although nothing happened on the property for the next 12 years, in October 2018, Viewpoint89 LLC applied for a PAD on about four acres next to Antelope Park. This move was in addition to the Antelope Park request for a revised preliminary plat for 189 lots on about 62 acres.

By Dec. 10, 2018, P&Z had recommended Council approve the preliminary plat. And, so, on Feb. 14 of this year, Council agreed to the rezoning. In April, Viewpoint89 LLC applied for subdividing final plats for the aforementioned parcels A and B.

However, town staffers say it’s their understanding that the current property owner will be selling to Mandalay Communities, Inc., which would ultimately develop/subdivide Antelope Park. Council, therefore, was asked to again approve the final plats under the new ownership.