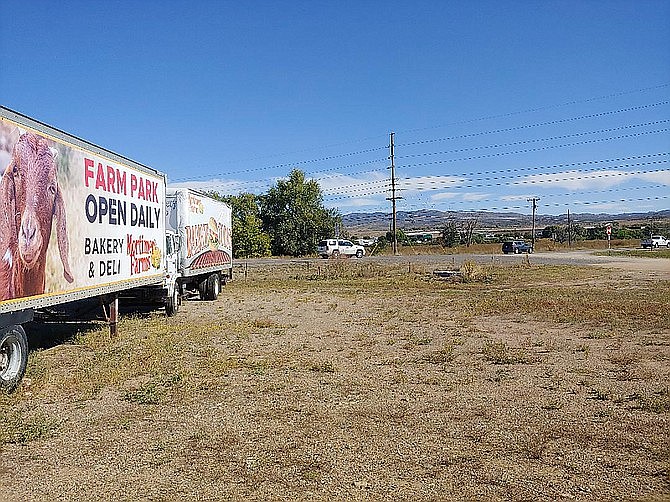 A semi-truck trailer and a truck advertise Mortimer Farms, which stands due south of Highway 169 from an approved future ranch-style apartment complex at the northeast corner of highways 69 and 169. (Doug Cook/Tribune, file)

With Mayor Kell Palguta dissenting, the Prescott Valley Town Council during its meeting Dec. 12 approved a developer’s final plan to build 183 ranch-style apartments on about 19 acres at the northeast corner of highways 69 and 169.

At the public library’s auditorium, Prescott Valley Crossing received a 6-1 vote in favor of a project that went through several hoops over the past few months, including a rezoning of its property.

Palguta said he didn’t like that the Scottsdale-based developer, Cavan Opportunity Fund, didn’t do more to try and reduce rents to accommodate teachers and first responders, among other public employees, who need affordable housing to live in the area.

The developer didn’t announce any changes to its rental prices during the Dec. 12 meeting, which disappointed Palguta. For decades, teachers have left Prescott and Prescott Valley to accept more lucrative teaching jobs in other parts of the state or the country.

“I am setting a precedent now,” said Palguta, a retired police officer, about what he’d like to see from future developers’ plans for new residential housing in Prescott Valley. “We’ve got to do something when we can to improve teacher retention. Schools are important to me, and we’ve got to start somewhere.”

For Prescott Valley Crossing to be viable, it still needs land easements so it can extend pipes that would eventually hook into the town’s sewer and water system. In the meantime, the development will rely on a package treatment plant for its sewer needs, the developer said.

Cavan plans to simultaneously open both phases of its development, which rests near a floodplain, despite the fact that a permanent wastewater treatment plant will be built later.

Over the past month, Cavan reworked its original development agreement with the town to improve the circulation of roads in the new community. Neighbors to the north of the property had been concerned about being able to drive in and out of the development. As a result, Cavan trimmed 13 to 14 units from its initial plans.

In addition, Cavan agreed to add a pool and a clubhouse to the development, which councilmembers had requested for children who may be living there.

“Thank you for listening to us,” Councilmember Lori Hunt told the developer.