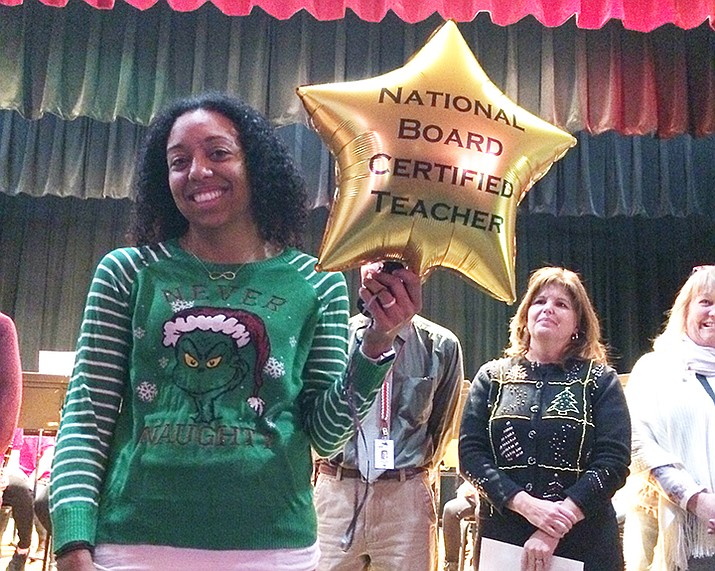 Abia Judd kindergarten teacher Rachel Chunglo is honored by the PUSD district on Tuesday, Dec. 17 for earning her national certification from the National Board for Professional Teaching Standards. (Nanci Hutson/Courier) 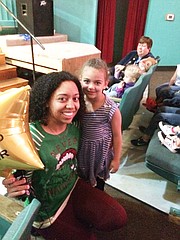 Prescott Unified School District leaders came up with the perfect surprise for an Abia Judd kindergarten teacher honored as the first teacher in their schools to earn national certification.

For a few minutes before the Mile high Middle School’s holiday “How the Grinch Stole Christmas!” concert attended by all district kindergartners, Superintendent Joe Howard “hijacked” the program.

From the stage in the Hendrix Auditorium, Howard apologized for the interruption. But he assured it was for a very good cause. He said he and the other district educators on the stage all came together to honor “a very special” teacher: Rachel Chunglo.

Chunglo, a PUSD teacher for the last eight years who in 2017 was a finalist for the K-2 Yavapai County Teacher of the Year award, is one of just 3 percent of teachers across the nation to earn this distinction from the National Board for Professional Teaching Standards.

This year, the board welcomed 3,831 new nationally certified teachers to a pool of 125,000 nationwide. Chunglo and her national colleagues represent 2,914 schools in 46 states.

The certification process is an intensive, voluntary process for teachers at all grade levels who wish to elevate their classroom performance with rigorous standards for “what accomplished teachers should know and be able to do.”

“These new National Board Certified teachers will continue to change the way their students learn, and their proven ability to be the best teachers they can be will have a ripple effect on their schools and their communities for years to come,” said NBCT president and Chief Executive officer Peggy Brookins in a news release. “I’m especially proud to see that large numbers of new NBCTs are teaching in schools where they are needed most.”

Chunglo, a mother of four children who holds a master’s degree in early childhood education from Arizona State University as well as a bachelor’s degree in journalism, started her process three years ago.

“She did this because she wanted to be a better teacher,” Howard said as he pointed toward her 26-student class seated in the Hendrix Auditorium for the brief, but poignant balloon ceremony.

Wearing a bright green holiday sweatshirt, Rachel was clearly stunned, and delighted, with the district recognition. She was all smiles as district office leaders, Abia Judd Principal Stephanie Hillig and other officials hugged and cheered her achievement.

“We are so incredibly proud of her,” Hillig declared, noting this process was “a ton of work.”

District Director for Professional Development Kelli Bradstreet organized the celebration on behalf of the Arizona K12 Center that is promoting this certification by waiving some of the fees associated with the process. In August, Bradstreet shared that 10 teachers in the district were in the pre-certification phase; she said this past week that number has dwindled to less than a handful because of the time and effort required to pursue such certification.

To Chunglo, the certification seemed an appropriate “next step” in her career education.

“I just wanted to keep growing,” Chunglo said. “Teaching is kind of my passion.”

Earning this certification “makes me feel like I am a good teacher,” Chunglo admitted.

“It confirms for me that I’m doing something right in the classroom,” she said.

As for whether this would prompt her to pursue other academic opportunities, Chunglo said she is very content to be part of the PUSD family. She and her husband, Doug, enrolled her three oldest children in Prescott district schools — Ali, 10, Lena, 8, and Jules, 5, a kindergartner at Abia Judd. Their youngest, Seraphina, is 2.

“I’m kind of rooted here. This is our home,” she declared.