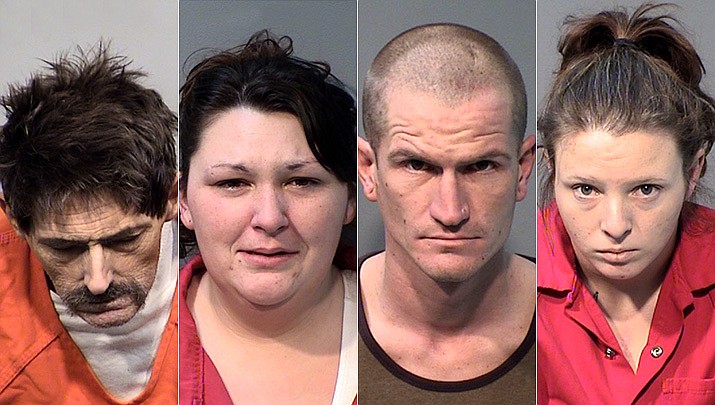 EDITOR'S NOTE: This story has been updated from an earlier version to show the correct age of Jeremiah Marrs, which is 29.

Five adults were arrested and three young children were removed from a dangerous environment in Chino Valley during an investigation into a stolen motorcycle on Dec. 12.

Shortly after receiving the theft report, Chino Valley Police Department (CVPD) found the motorcycle unattended in the area, apparently abandoned, according to a CVPD news release.

Jeremiah Marrs, 29, of Chino Valley was identified by witnesses as the one who stole the motorcycle and had been seen in the area riding it, police said.

Officers went to his residence in the 200 block of Hohokam Dr. in an attempt to contact him. While there, they found a motorcycle helmet and gas can, both of which the victim reported stolen along with the motorcycle, the report states.

Some of that methamphetamine was in plain view on a table in the home’s living room along with three children, ages 5, 6 and 7, police said.

A snort tube with residue on it was found in the pocket of one of the small children, the release states. A hidden compartment was also located in the children’s closet, as were “numerous used hypodermic needles, which were found among the children’s toys and belongings.”

These findings resulted in the arrest of the children’s mother and grandfather, Kyra Craft, 28, and Dennis Craft, 55.

Misty Wentz, 26, was also in the home. She was identified as Marrs’ girlfriend and taken into custody after drug paraphernalia was found in her possession, the release states. Marrs was located a short time later and also taken into custody.

Another person contacted during the investigation was found to have an active probation violation warrant and was also taken into custody.

All adults were booked into the Yavapai County jail and remained in custody as of Monday, Dec. 16.

The three children were removed from the home by the Department of Child Safety and the family dog was impounded at a shelter, police said.