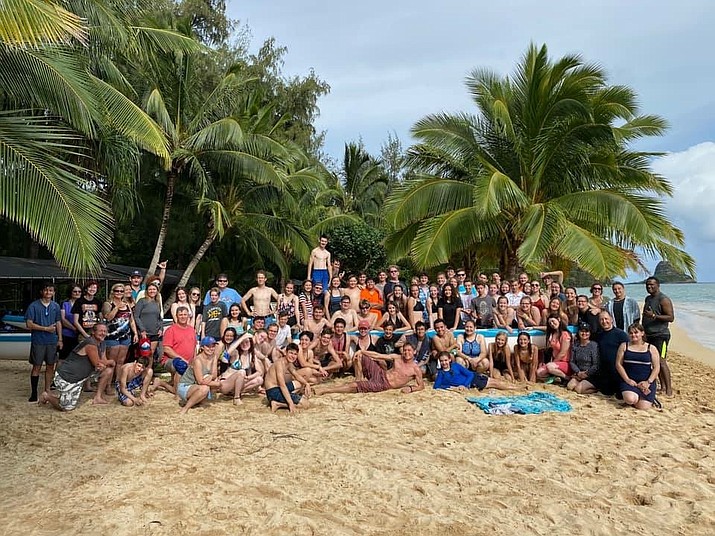 On a beach in Honolulu.(PHS Band/Courtesy photos; more photos and videos can be viewed on the Prescott Unified School District Facebook page) 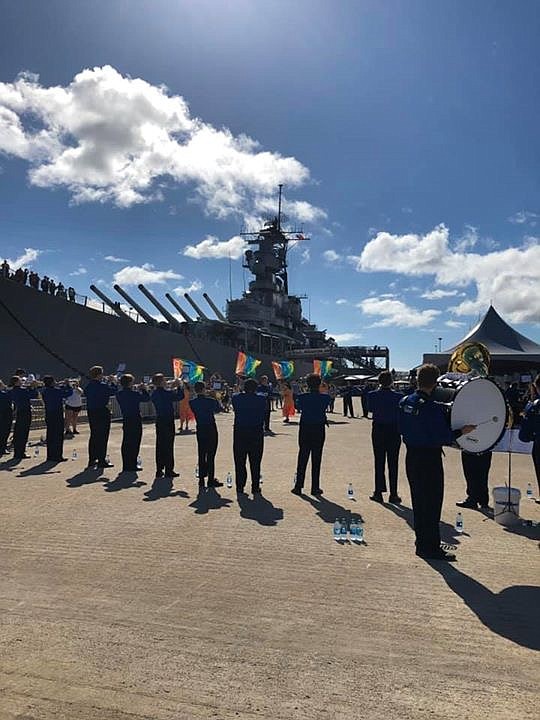 Performing at the USS Missouri.(PHS Band/Courtesy photos; more photos and videos can be viewed on the Prescott Unified School District Facebook page)

This year, Lila’s gift was her selection as a member of the band and orchestra representing Arizona to speak at the 78th annual National Pearl Harbor Day Remembrance Day ceremonies.

“It was such an honor,” said the senior whose essay about those events was selected by the national organizing committee to be read at the Dec. 7 Pearl Harbor commemoration ceremonies.

The Pride of Prescott was invited to be Arizona’s musical ambassadors to the ceremonies the week of Dec. 2 to Dec. 8. The groups performed with the Marine Corps Band at the USS Missouri during a mid-week ceremony. They also marched in the main parade down Waikiki Boulevard.

For Lila, though, the moment etched into her very soul is when she stepped up to the podium to offer personal condolences and heartfelt thanks to surviving family members of those lost heroes.

Poised and prepared, Lila reflected on the Sunday that started as a bright, beautiful morning only to in minutes be plunged into the chaos of bombs, smoke and flames, and heartbreak for the unfathomable losses on America’s own soil.

She read the words of an anguished, yet determined president who assured America would not be culled by terror. Lila referred to the lost as “heroes,” and “warriors.”

Admitting she might be viewed as unsuited to speak on such an occasion, Lila was clear that she has always felt a connection because Pearl Harbor Day is stamped on the calendar date of her birth. When friends would ask her the meaning of Pearl Harbor, Lila said she was always bothered that a world-altering tragedy could ever be forgotten.

She closed her speech by asking people to honor the memory of those by their actions; she asked that their sacrifices “not be in vain.”

Upon the return this week of the participating 69 band and orchestra members, and their chaperones, Lila reflected again on how privileged she was to be in such a place at such a time.

Most of her peers are well aware of the 9/11 terrorist attacks, yet know so little about its American precursor, the Pearl Harbor attack that prompted America’s entrance into World War II, Lila said. She believes it is critical that neither be forgotten.

PHS Director of Instrumental Music Dan Bradstreet declared Lila’s speech as one of the highlights of the trip.

“I wanted to do justice to those who were lost 78 years ago,” she said.

From performing with the Marine Corps Band on the deck of the USS Missouri, and the solemn tour of the USS Arizona Memorial, to a hike to the top of Diamond Head, the Pride of Prescott band and orchestra members said their trip was an adventure like no other.

Band member Annie Beaupre said she was honored to perform as a “tribute to veterans.”

The great-grandmother of one of his students, Emily Aranda, was personally impacted by the attack, losing her stepbrother, Henry Schroeder, on the USS Arizona, a name they looked up on the wall, Bradstreet recalled.

She said the visit to the USS Arizona was both “somber and sad, yet touching.”

Beyond the performances, students spent time on the beach, visited the Polynesian Cultural Center and Dole Plantation. Most enjoyed a ride in a 16-paddle canoe.

A highlight for a few was beating their band director in a round of “spike ball.”

The Prescott education community and supporters rallied around the band, assisting with fundraisers that generated more than $12,000 to defray expenses of a trip that cost most students just over $2,000.

Chaperone Kelli Bradstreet, the band director’s wife and district director of professional development, said the community has every right to take pride in these students who proved “amazing” ambassadors for the City of Prescott and the State of Arizona.

“They were really passionate about why they were there, and honored the memories of our fallen heroes,” Kelli Bradstreet said. “I am just really proud that these are our kids.”

Prescott Unified School District Superintendent Joe Howard said he sees it as a duty for educators to teach children the lessons of history; to stand tall and represent their community and nation in ways that will reverberate the rest of their lives.

“From a superintendent standpoint, I feel like a dad, very proud of our kids who are able to represent us at such a high level,” Howard said. “The reason we do these things is that these kids will never forget this …it’s part of the big picture of educating kids today.”