‘Last-ditch effort’ to save the Granite Dells encounters hitch over water allocation
Negotiations to continue with all sides seeking to bridge gap between city, AED 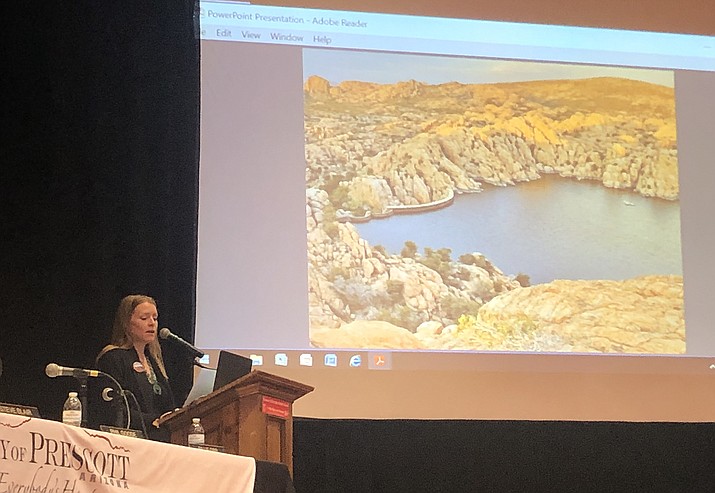 Save the Dells Chair Amber Fields speaks during the special Prescott City Council meeting Thursday, Dec. 12, 2019, stating the organization supports the city's offer of water to AED; however, Save the Dells disagrees with the amount AED is requesting. (Cindy Barks/Courier)

All sides appear to agree on the basic goal of saving the heart of the Granite Dells. But when it comes to the details, disagreement runs deep – 141 million gallons deep.

About 650 people turned out at the Prescott Mile High Middle School Thursday night, Dec. 12, for a public update on recent progress on negotiations for preserving the land around the iconic Point of Rocks in the Granite Dells.

During the two-hour-long meeting, the crowd learned that the City of Prescott, the land developer Arizona Eco Development (AED), and the Save the Dells advocacy group all agree on the basic principle of exchanging city water for preservation of the most crucial Granite Dells land.

Where they disagree, however, is on the amount of water needed to make the deal happen.

As the situation currently stands, AED says it is willing to preserve about 475 acres of Granite Dells land at and around the Point of Rocks (along with another 513 acres near the Prescott Airport runway) in exchange for an allocation of 1,082 acre-feet of city water. That water would then be used to serve several-thousand new homes – inside and outside of the city limits.

The city, on the other hand, has offered about 648 acre-feet of water to make the deal happen – leaving a chasm of 434 acre-feet of disagreement. (An acre-foot equals 325,851 gallons).

Save the Dells Chair Amber Fields says that although the organization has always said it would not oppose a transfer of water rights for preservation of the Dells, the amount requested by AED goes beyond what would be a fair deal.

“Save the Dells finds the city’s current offer to AED acceptable and sufficiently in line with our two years of advocacy,” Fields told the crowd. “We think it makes sense to use this water as a bargaining chip to save the Dells.”

But, she said, “AED’s proposal goes too far beyond what we consider a fair deal to the taxpayers and those concerned with water sustainability … We’re not willing to give away the whole farm, and that’s what AED is asking for by demanding 1,082 acre-feet of water.”

THE POINT OF CONTENTION

City Manager Michael Lamar said the city’s offer of 648 acre-feet of water is based on the existing Yavapai County zoning for the two sections of land that AED has proposed developing with city water north of Highway 89A.

“The water has to be tied to land masses; it can’t be banked,” he said.

Gisi has outlined a plan in which AED would preserve the land around the Point of Rocks and would transfer the homes that were initially planned there to other locations in the development.

Along with the two Granite Dells-area parcels that AED earlier asked the city to annex into city limits, the 1,082 acre-feet of water would also go toward two new parcels located northeast of the Dells, along and north of Highway 89A.

AED does not plan to seek annexation of those two parcels, but would develop them in unincorporated Yavapai County, with city water.

As Gisi proposes it, he would seek rezoning through the county of the southern parcel located along Highway 89A to allow for 1,000 to 1,300 new homes. (The 640 acres are currently zoned for two-acre lots, or about 320 homes.) His proposal for 1,082 acre-feet of water is based on the rezoned numbers, he said.

Lamar said after the meeting that city has opted to use the current zoning, not the proposed zoning, in its calculations for water. “It matches the county’s existing zoning,” he said of the city’s offer.

While several council members expressed interest in finding a way to bridge the gap, others voiced concerns about the amount of requested water and other aspects of the proposed deal.

Councilwoman Alexa Scholl said that while she is not comfortable with the 1,082 acre-feet that Gisi is proposing, “I’m flexible on the 648.”

Councilman Steve Sischka also voiced support for further negotiation. Maintaining that the sides are close to achieving the desired goal, he said, “It is time to circle up, to hold hands, and sing Kumbaya.”

Councilwoman Billie Orr stressed the importance of the preserving the Point of Rocks. “We’ve got to make this happen,” she said. “We can get there. Where Jason is is high; where we are is low.”

Councilman Steve Blair noted that annexations such as the one Gisi is seeking have been the norm in the development of Prescott. “If you haven’t been here since the 1960s, everybody’s been annexed,” he said.

Acknowledging the gap, Mayor Greg Mengarelli said more negotiation is needed. “I want to save the Dells and get the land at the airport. But I don’t think this deal is had at 648 acre-feet,” he said.

But other council members voiced concerns about the impacts of the proposed deal.

“I think the city’s offer is pretty well-crafted,” said Councilman Phil Goode. “I think it’s fair. Mr. Gisi’s going to have to come well in our direction.”

Goode also voiced concerns about the impacts of the 200-room resort that AED is planning.

Although Gisi has said that his proposal involves relocating the resort from its previously planned spot along the Iron King Trail to the north and out of the rock formations, Goode pointed out that the access route into the resort is being planned to cross the Peavine Trail.

He questioned the impact that hundreds of daily vehicle trips would have on the popular recreational trail. Trail users “would have a hard time getting across that trail,” Goode said.

Councilwoman Cathey Rusing also voiced concerns about the amount of water being requested. “We live in a desert, and we’re in a 25-year drought. It could be the new normal,” she said.

Still, she added, “This is our last-ditch effort to save the Dells.”

Noting that the effort by Save the Dells had “struck a chord in the heart of the community,” Rusing added, “If we don’t come together and find common ground, it would be heartbreaking.” 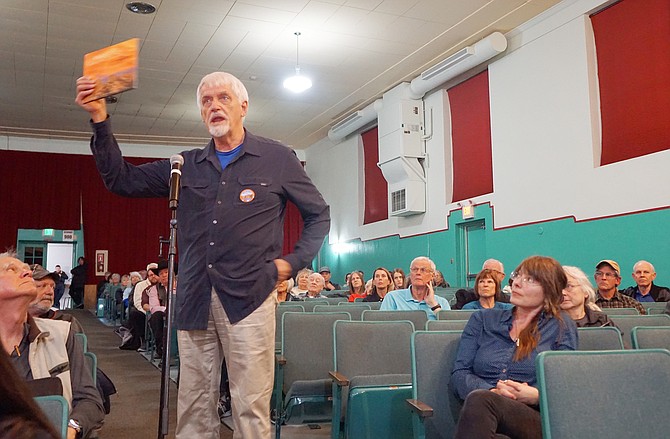 Walt Anderson, an advocate for Granite Dells, speaks to the Prescott City Council on Thursday, Dec. 12, 2019, about the importance of saving the Dells. (Cindy Barks/Courier)

After the meeting, Mengarelli said he was hopeful that the two sides could reach a compromise, although he declined comment on how far the city might move in its offer.

Gisi, however, expressed worry about the distance between the two sides. “I’m happy to negotiate, but it’s a tough spot. It’s too big of a gap,” he said after the meeting.

Fields and members of the audience also brought up a number of other concerns about the deal, including the quality of the 375 acres of water rights that Gisi was bringing to the table, as well as the value of the 513 acres he is proposing as open space at the end of the airport runway.

Mengarelli emphasized at the start of the meeting that “nothing’s been finalized yet” on the proposed annexation or the water-exchange proposal.

Thursday’s meeting was planned “for transparency sake,” Mengarelli said, but “It does not trump any of the normal process.”

City officials have said for months that the next official step in the annexation process would be an extensive review by the Prescott Planning and Zoning Commission. That review has yet to be planned.

'Land for Water': Dec. 12 Prescott City Council meeting will focus on trade-off for preservation of Granite Dells
Talk of the Town: Our line in the sand (Save the Dells)
Granite Dells developer proposes 255 acres of open space, including Point of Rocks
‘Save the Dells’ group pushes for 500-acre regional park in Granite Dells
Privately owned tracts make up significant portions of Dells