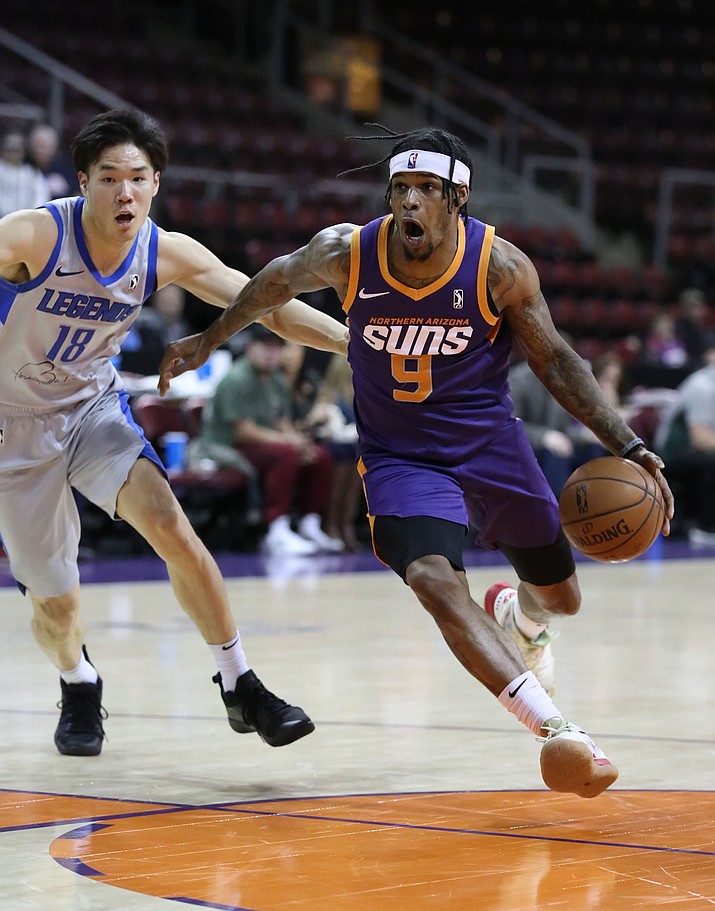 Northern Arizona Suns guard Ahmed Hill (9) drives to the hoop during a game against the Texas Legends on Tuesday, Dec. 10, 2019, at the Findlay Toyota Center in Prescott Valley. (Matt Hinshaw/Courtesy, file)

EL SEGUNDO, Calif. – The Northern Arizona Suns were stroking it all night, but they couldn’t come up with the win Friday at the South Bay Lakers.

The third quarter was the complete opposite, with Northern Arizona scoring just 18 points on poor shooting. In the frame, the Lakers took a 13-point lead, taking a 99-87 advantage to the fourth quarter. The fourth mostly belong to South Bay, who took its largest lead of 21 points, winning by 17.

Several Suns had strong games, powered by Daxter Miles Jr.’s 27 points on 9-of-15 shooting, including 5-of-9 from deep. He added five rebounds, four assists, a steal and a block. This was his fourth 20+ point game on the season, now the second most such games on the team (Harper has seven).

Ahmed Hill continued his latest string of great play with 17 points on 7-of-13 shooting (3-6 3PT) and two steals. Jalen Lecque made his first five shots, finishing with 14 points (5-6 FG, 2-3 3PT) and three assists. Harper had a career-high 11 assists, to go with eight points and four rebounds. He has 19 assists over his last two games. Anthony Lawrence II also scored in double figures (11 points, two steals), while Tariq Owens had the most blocks by a Suns player this season with five, adding eight points and five rebounds.

The Suns next play on Sunday at the Findlay Toyota Center, where they’ll host Buckets’ Birthday Luau against the Santa Cruz Warriors at 3 p.m. MT. The first 1,000 fans in the door get the first bobblehead in team history.