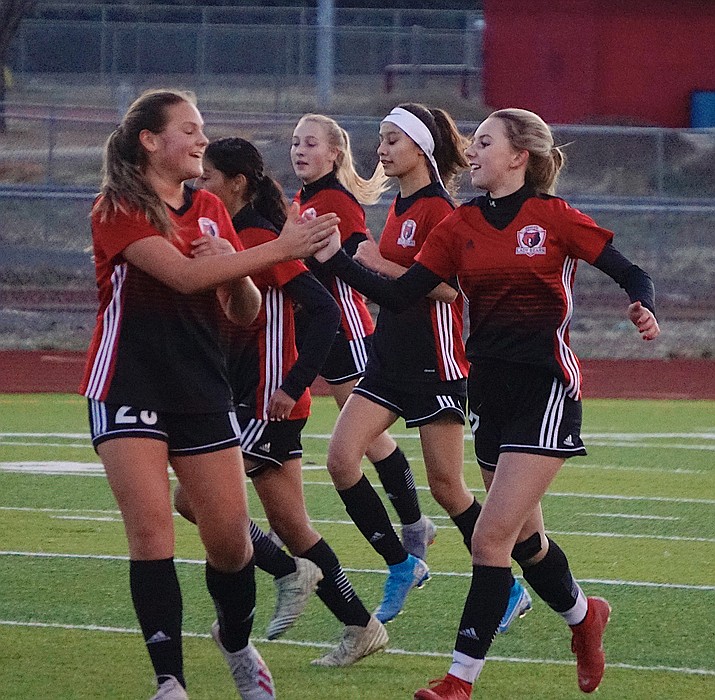 ABOVE: Bradshaw Mountain midfielder Bethany Gittins, left, celebrates with Alexis Clynes, right, after Clynes scored a goal during the first half of a game against Moon Valley on Thursday, Dec. 12, 2019, at Bob Pavlich Field in Prescott Valley. (Aaron Valdez/Courier)

PRESCOTT VALLEY — It had to be the freshman!

“I think we all did very well today. The goals that I have scored before were king of iffy and not completely on point but I feel like I finally got out of my head and realized where I’m supposed and when I’m supposed to be there,” Gittins said.

With winter right around the corner, it took a little while for the Bears to warm up due to some chilly conditions at Bob Pavlich Field. Moon Valley put up a gritty effort in the first half but Bradshaw Mountain still kept most of the possession and had the better opportunities going forward.

The Bears did have trouble finishing their chances though until good ol’ junior midfielder Alexis Clynes received the ball on the right wing. She then fired a shot from about 25 yards out that knuckle-balled over the goalkeeper to give the Bears a 1-0 lead 15 minutes into the first half. 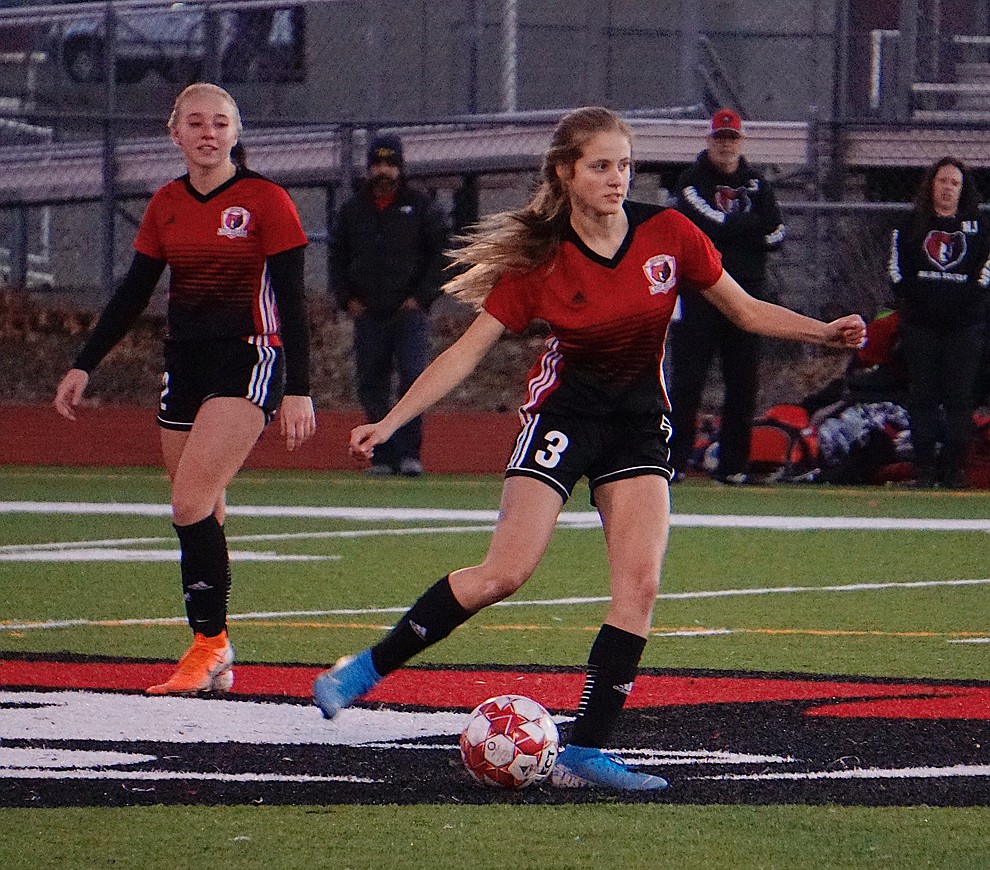 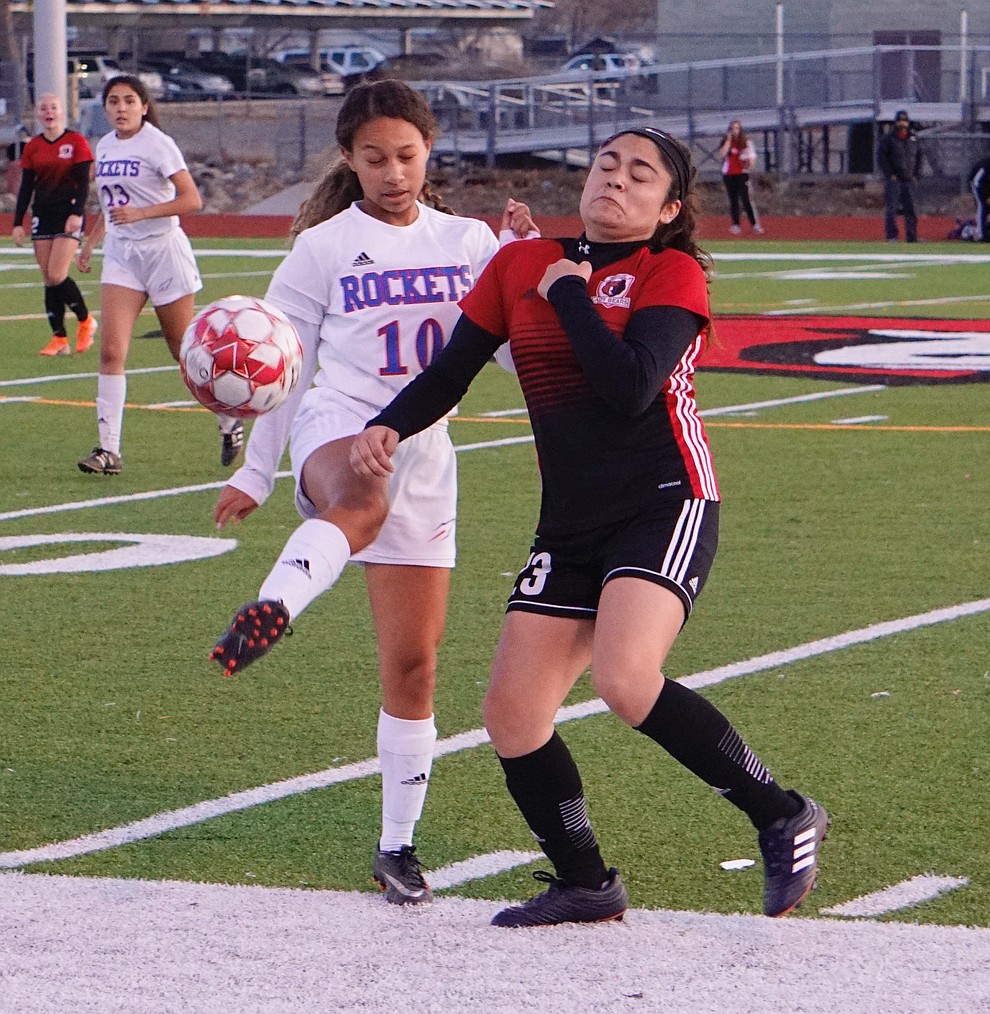 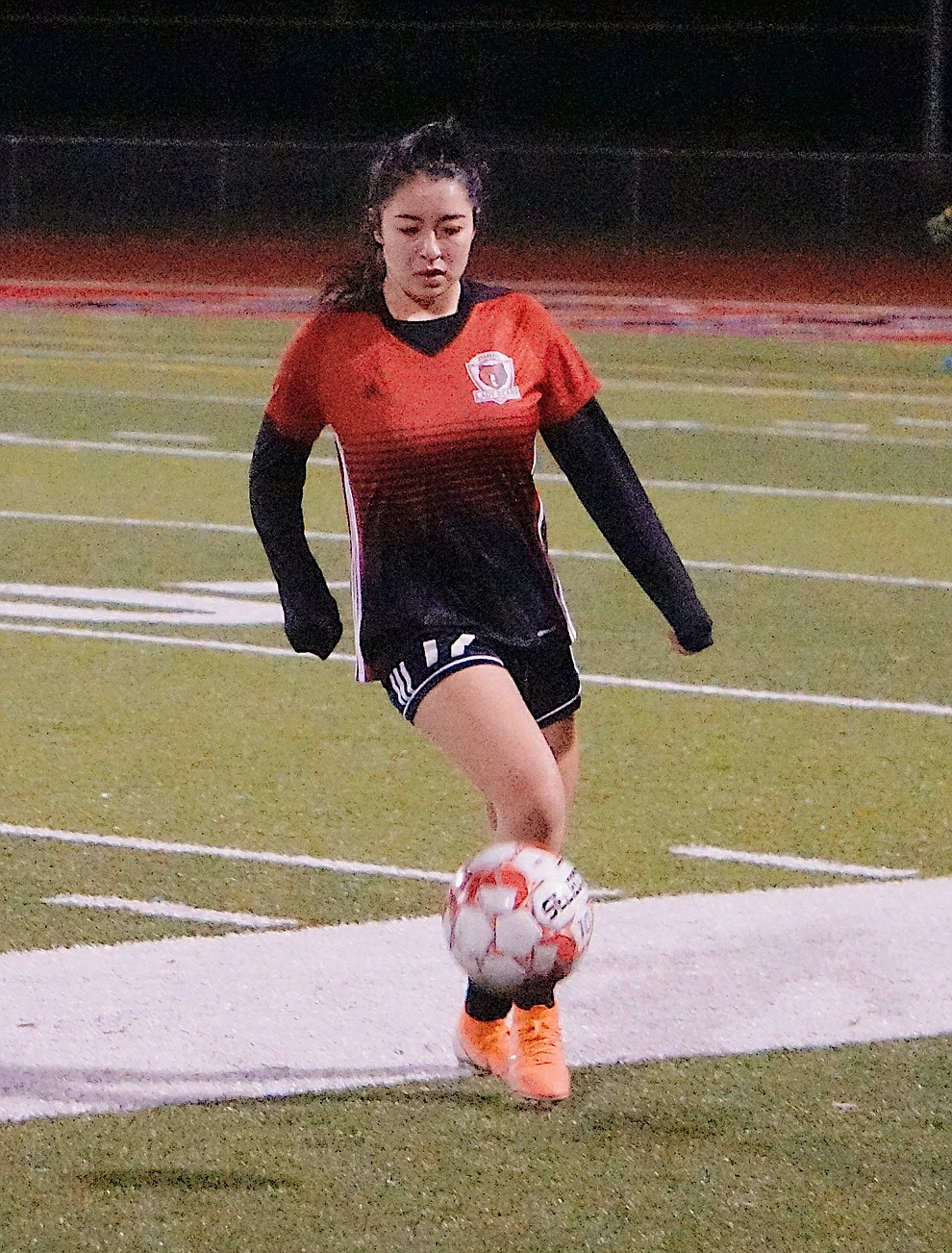 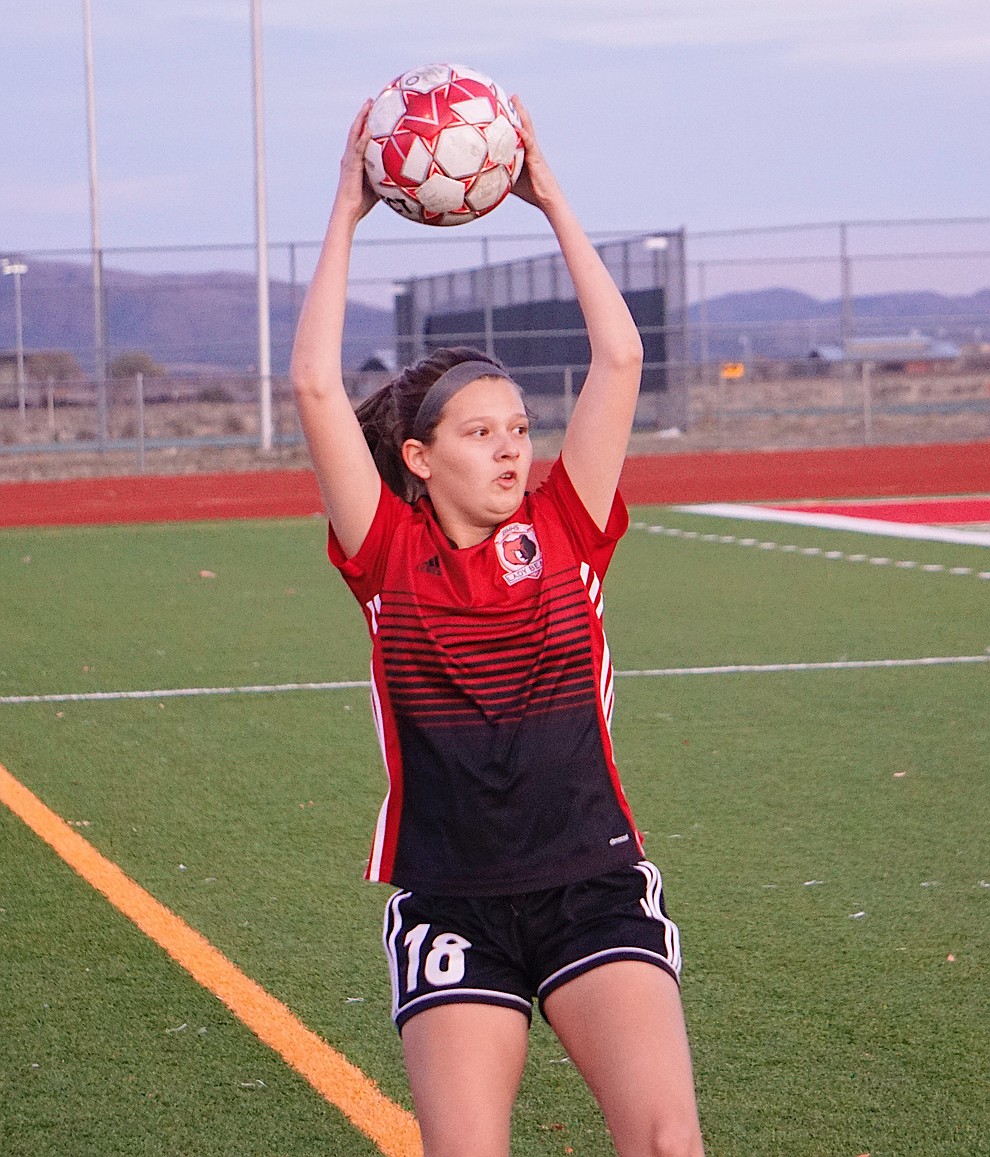 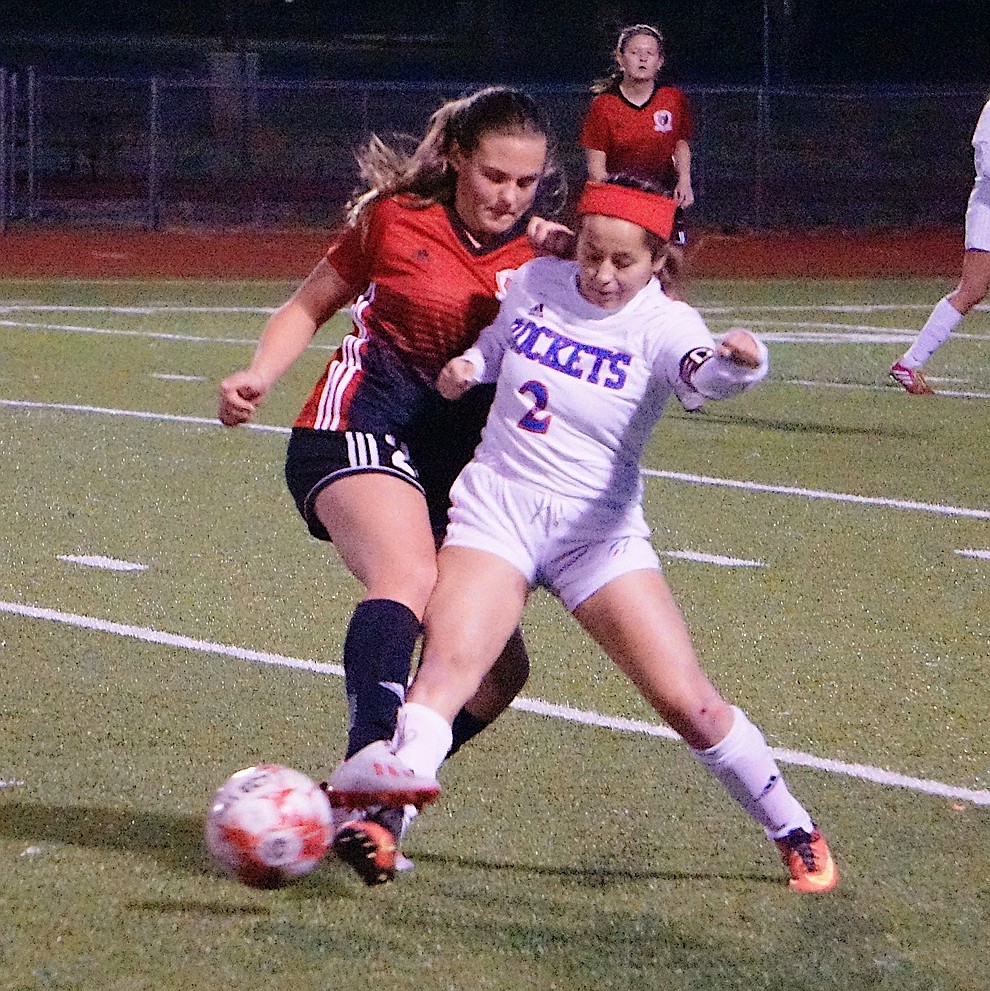 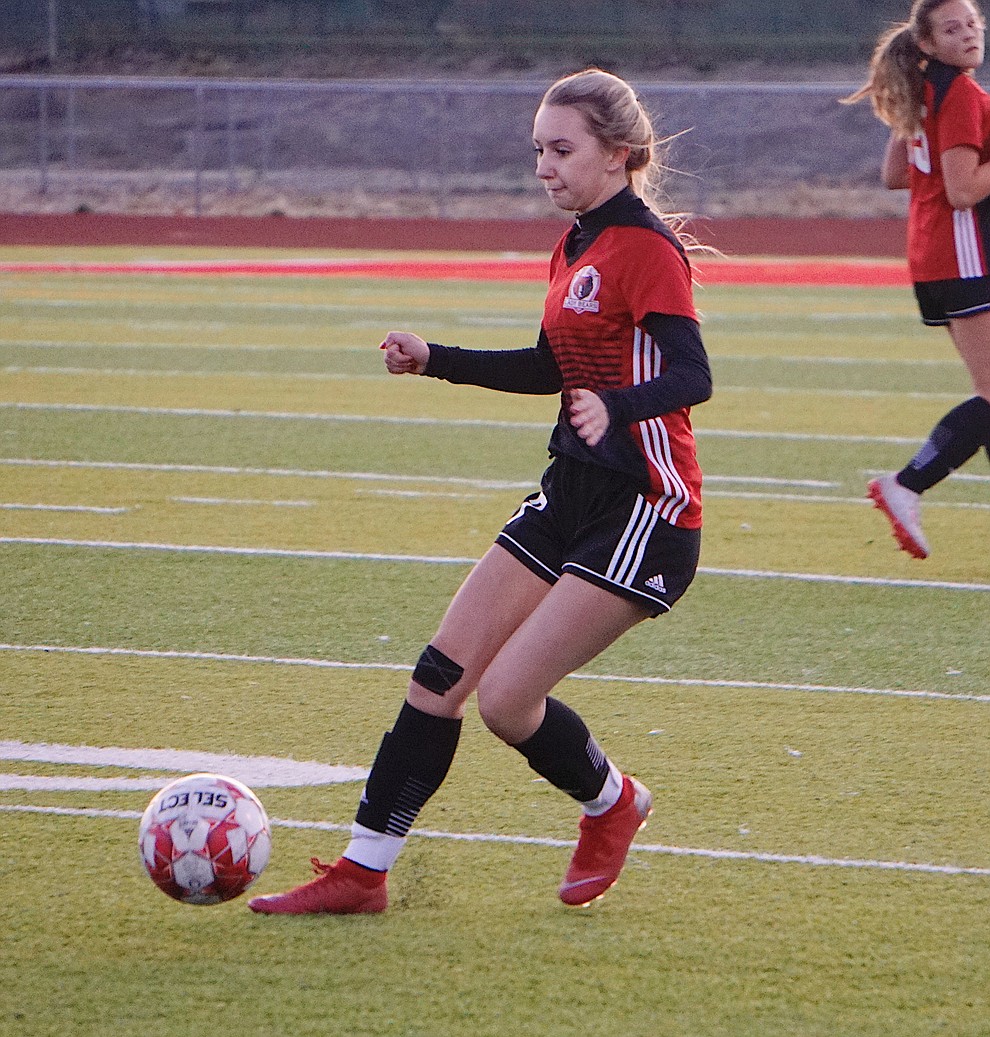 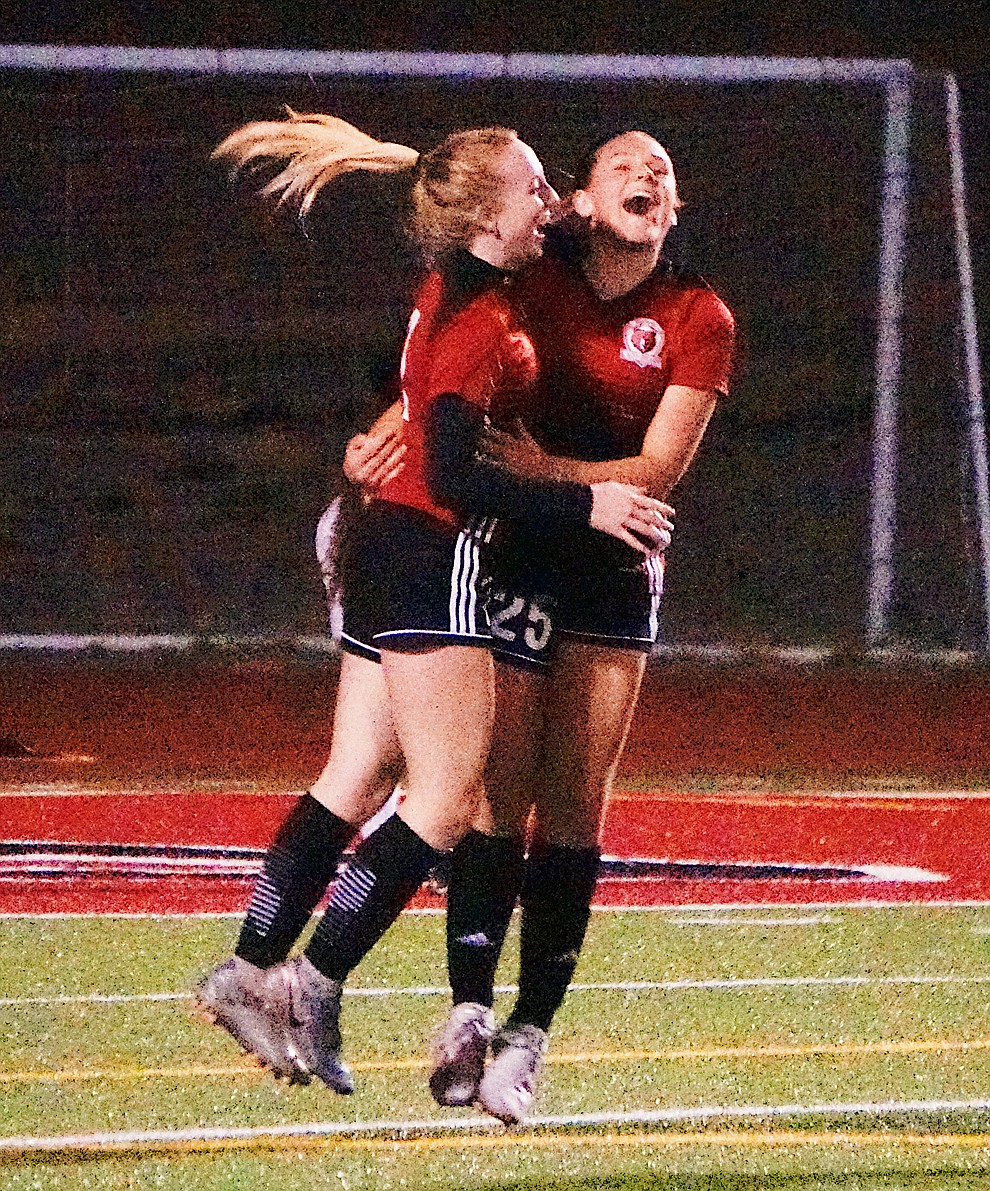 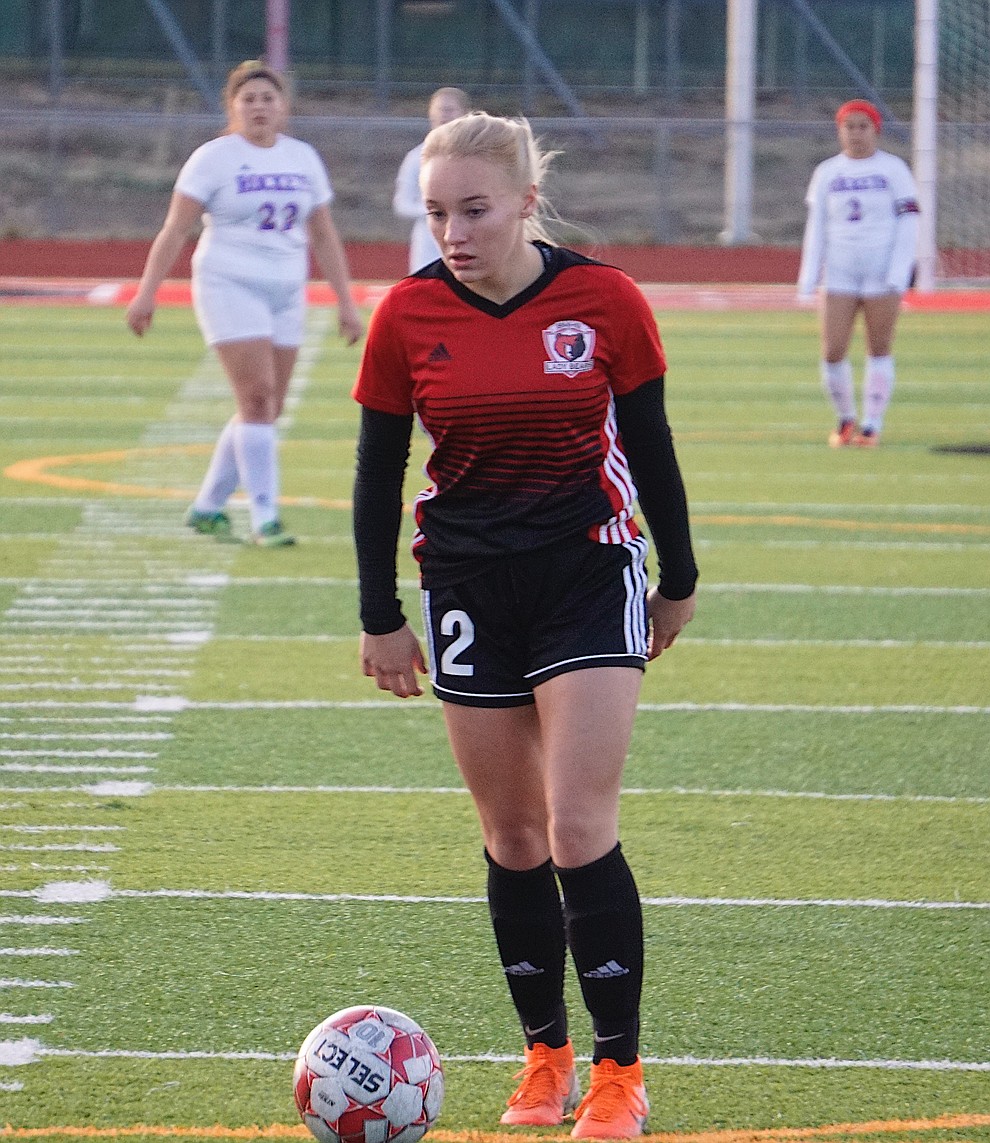 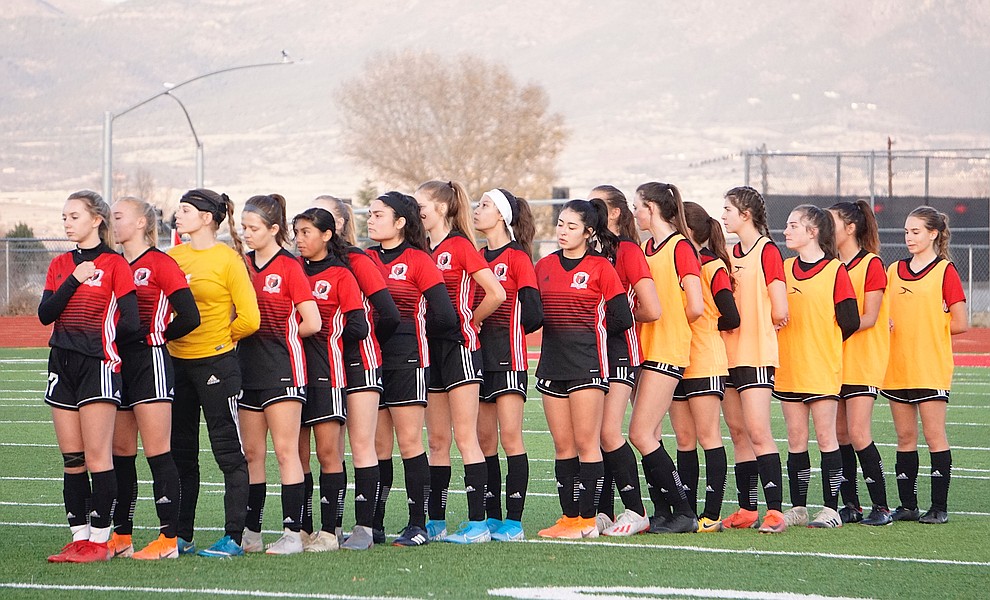 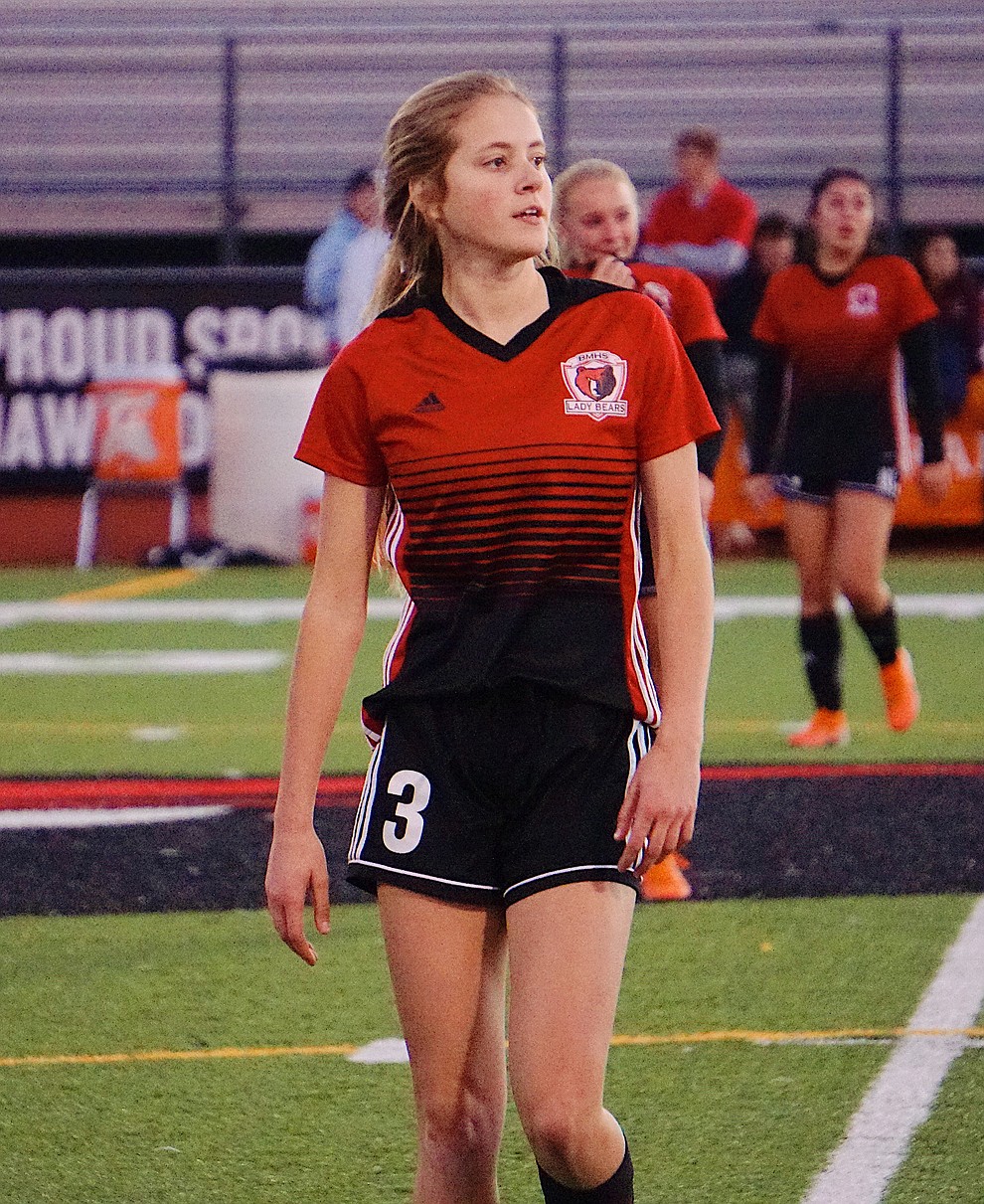 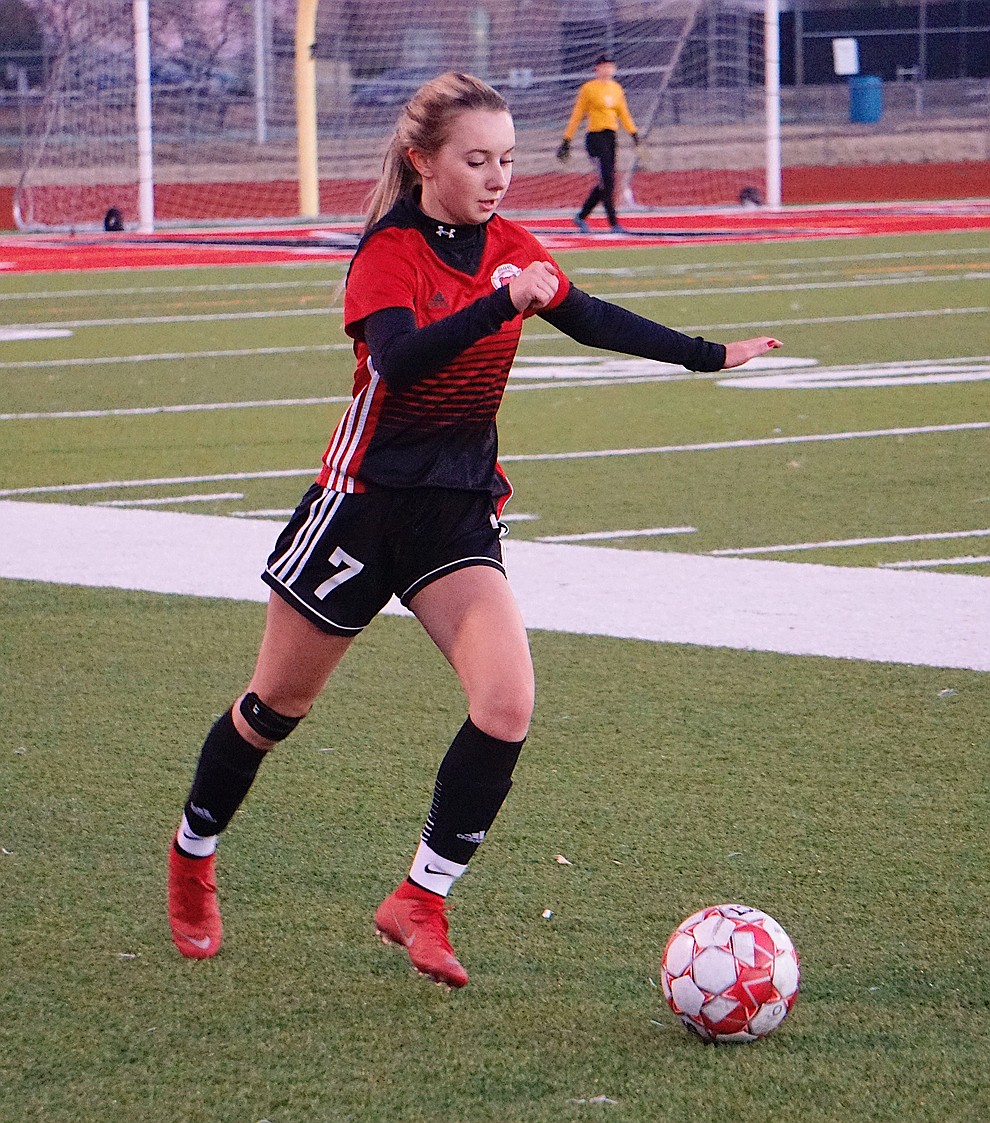 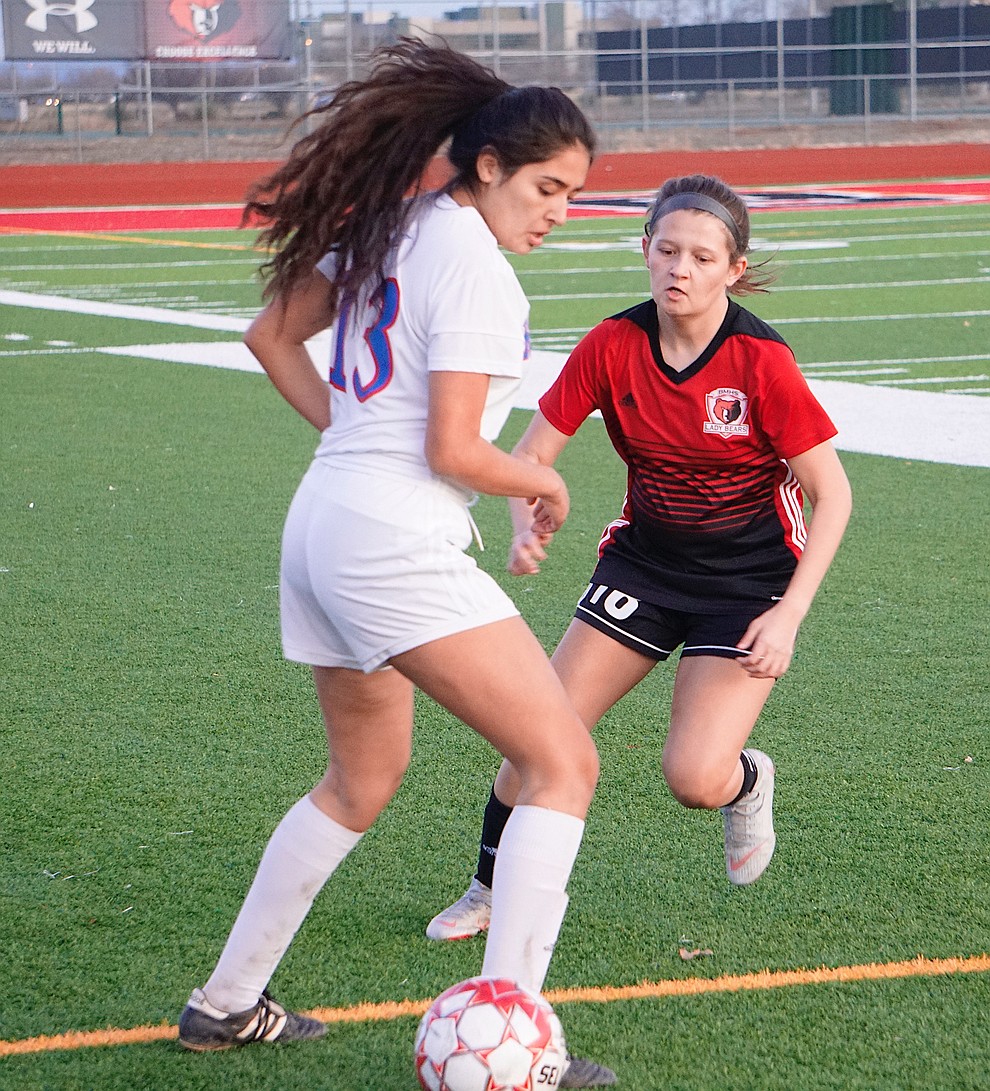 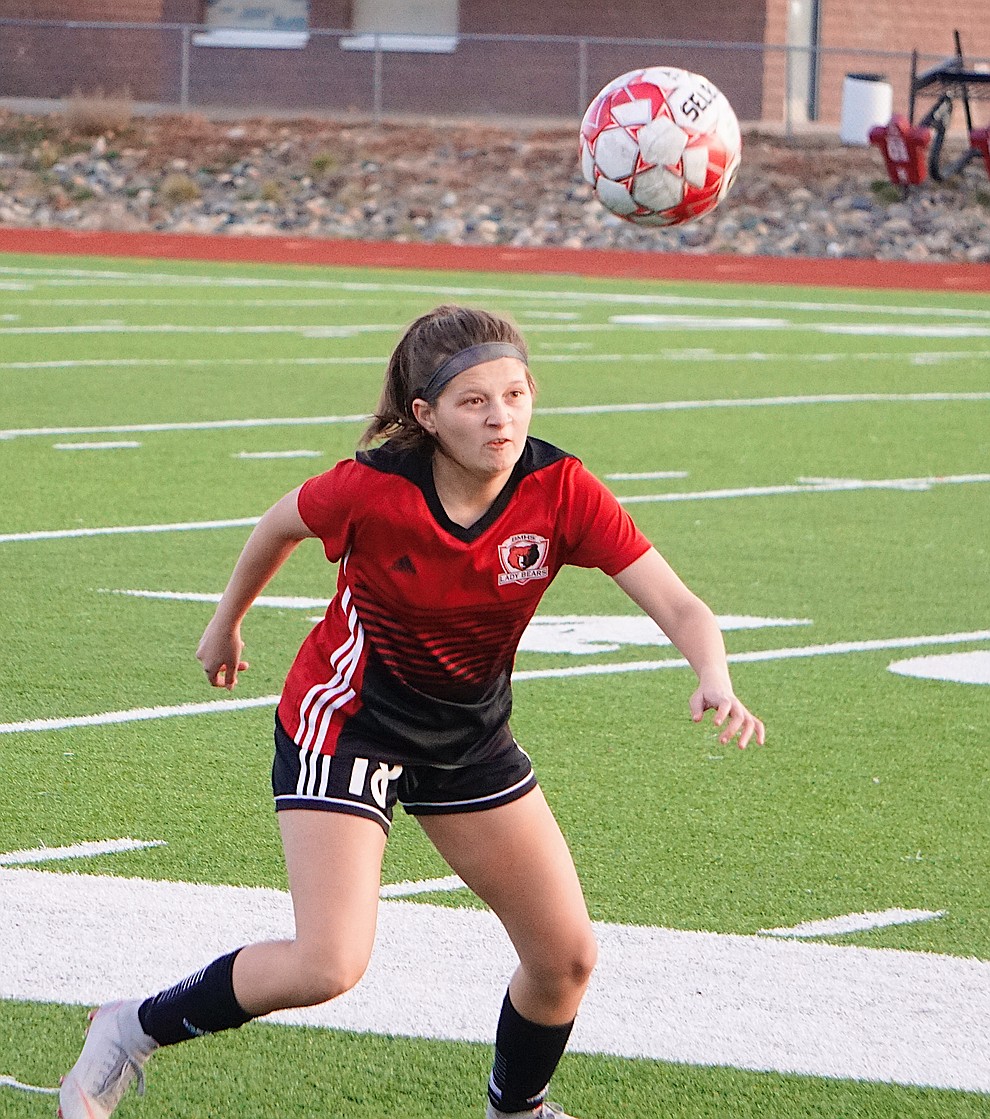 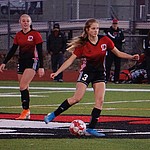 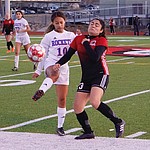 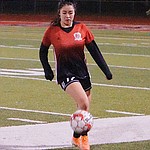 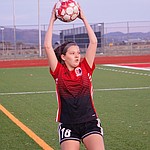 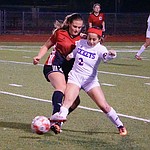 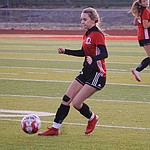 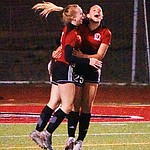 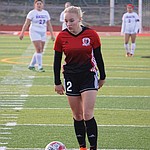 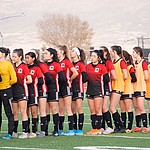 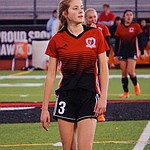 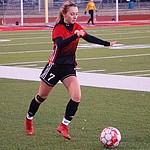 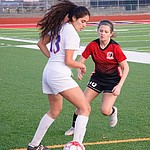 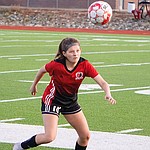 Clynes’ wonder goal was the only one of the first half but the best was yet to come for Bradshaw Mountain. The Rockets quickly ran out of fuel in the second half, allowing the Bears to seize complete control of the game.

It was now Gittins’ time to shine after Bria Coleman sprinted down the left flank to deliver a left-food service into the 18-yard box. The cross went straight to Gittins, who one-timed it right to the goalkeeper but then promptly buried her own rebound.

Not only did Gittins’ goal give the Bears a 2-0 lead, but it opened the floodgates. And funny enough, the Coleman-Gittins connection scored again in similar fashion for Bradshaw Mountain’s third goal on the night.

“Bethany is a beast and we made fun of her last week because she cleared a palm tree at St. Mary’s last week. But we told her to just pull the shot down and it’ll fall eventually,” said Bears head coach John Sterling. “She’s been taking probably 15 shots a game and they came tonight. She found her rhythm.”

Gittins’ night was only half way done though as she lent a helping hand on the Bears’ fourth goal when junior varsity call-up Samantha Montgomery put away a rebound off a Gittins shot. Gittins’ best goal came when Coleman drew a hard foul in free-quick range.

For Gittins, this was like handing Dracula the keys to a blood bank as she curled the free kick into the back of the net from about 30 yards out. The goal earned her the hat-trick but she still had one more left in the tank.

With 10 minutes left in regulation, Gittins recovered a loose ball near the half moon and laced one past the keeper for a final 6-0 lead.

While Gittins logged in the best individual performance, Bradshaw Mountain’s defense was not to be overlooked. A backline that featured senior Sarah Hacker and sophomore Abby Platt stymied the Moon Valley offense all game long, preventing goalkeeper Delaney Johnson from having to make any big saves.

“We’ve changed some things up and we’ve been trying new defensive combinations and it clicked tonight,” Sterling said. “It’s not really that much different than it has been but it’s just a little bit different philosophy on how we do things and it really showed tonight.”

The Bears (3-1) will look to extend their winning streak to four games in another non-region match against Cactus on Thursday, Dec. 19. Kickoff is set for 5 p.m. at Bob Pavlich Field.