Chino Valley puts on a ‘December to Remember’ 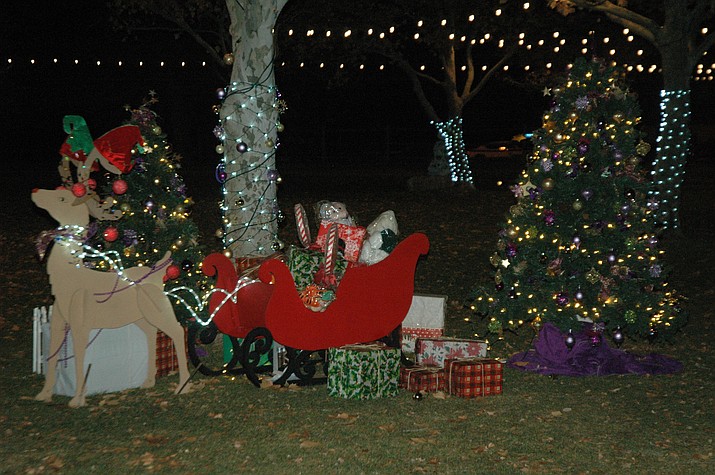 The holiday display by the Chino Valley Lioness Club, put up at the 2018 December to Remember at Memory Park event. (Jason Wheeler/Review) 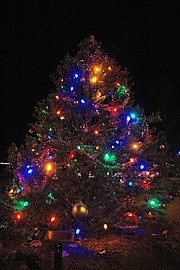 The Chino Valley Christmas Tree, all decorated at Memory Park in 2018 (Jason Wheeler/Review)

The Town of Chino Valley has partnered with the Chino Valley Area Chamber of Commerce once again for the second annual A December to Remember at Memory Park event Saturday, Dec. 14.

There will be some carolers set up and performing in the park for the entire event, said Recreation Lead Dallas Gray, with Recreation Coordinator Hailey Byrd adding the event will also have Christmas-themed bounce houses, food trucks and hot chocolate. It begins at 2 p.m.

Santa is set for an arrival too, Byrd said. He’s tentatively coming in on a Native Air helicopter, provided they don’t have to head to an accident Gray said. Otherwise, he’ll come riding in a fire truck or police car, she said. Then, at 6 p.m., Mayor Darryl Croft will light the park, Byrd said.

While there were vendors at last year’s event, there won’t be any this year because the weather is anticipated to be really chilly, Byrd said. Though there was a good response last year, the concern is keeping them warm and comfortable, and it might be something that gets worked out next year, she said.

Looking back at last year’s event, Gray said she really enjoyed seeing the park lit up after spending so much time getting it ready.

“We spent I don’t know how many hours and days out there in the park putting lights and strategically placing lights where they need to be and running extension cords,” she said. “You don’t get to experience the whole feeling until you have a bunch of people there … then you pull that switch and every tree lights up. It’s going to be even more extravagant this year.”

Businesses will also have Christmas displays set up that will remain in the park until Thursday, Jan. 2. It’s a way for local businesses to show their love for the community, said Chino Valley Area Chamber of Commerce Executive Director Lorette Brashear.

Last year, the chamber’s display was a tree shaped like a snowman and she’s excited about what the chamber is doing this year, Brashear said.

“We’re really thinking outside the box,” she said. “It’s going to be a spicy one.”

The free event begins at 2 p.m. Saturday, Dec. 14, with Santa arriving with Mrs. Claus at 4 p.m. It’s really cool seeing all the kids light up when Santa arrives, Byrd said. Christmas isn’t a very big deal for some kids, but it’s a wonderful experience to be able to give them a chance to see Santa, tell him what they want for Christmas and receive a gift from him, she said.

The goal is to create a feeling of the town coming together for a Hallmark Christmas, Gray said. It’s not something you can get everywhere, she said.