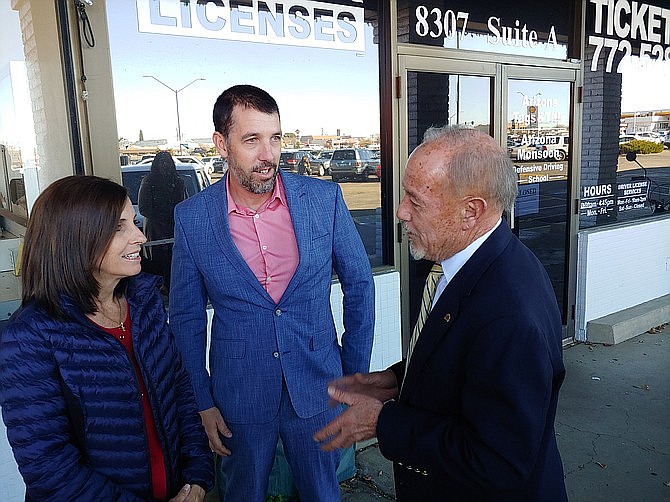 It appears that Prescott Valley Mayor Kell Palguta’s persistent pursuit of a new location for a bigger, more centralized post office in town is gaining traction at the federal level.

“As you may know, the Town of Prescott Valley’s population has grown significantly from 6,000 [people] in 1985 to almost 50,000 today,” McSally, O’Halleran and Gosar’s letter stated, in part. “Since that time, the town has petitioned USPS to address issues associated with the local post office’s current operations.”

The letter adds, “With this in mind, we request that USPS move forward with an analysis to ascertain the need for a new post office location. In this analysis, we would ask that you consider the town’s population increase, the facility needs to meet the volume, as well as the location, of these operations.”

The study should determine whether the feds need to relocate their main post office in Prescott Valley from 8307 E. Highway 69 Suite 1, which it leases, to a yet-to-be-determined site. Lawmakers are also asking Brennan to “consult with the local civic and business leaders [in Prescott Valley] as you move forward with this analysis and any findings.”

“I appreciate Senator McSally [and] Congressmen Gosar and O’Halleran taking the time to recognize the needs of the residents of Prescott Valley,” Palguta said in a news release. “I also would like to thank Senator McSally for taking the time [on Nov. 22] to witness first-hand the issues and concerns that our current residents deal with on a daily basis with our post office.

“I appreciate all the support and [the] step[s] taken thus far in our quest for a new post office in the Town of Prescott Valley.”

Palguta and the town council are concerned that as Prescott Valley’s population continues to grow, more traffic and business will overwhelm the post office on Highway 69.

Palguta says he doesn’t like that residents can’t pick up and drop off packages simultaneously at the main branch. Rather, they must pick up packages at the post office’s annex, 6545 E. Second St., and drop them off at 8307 E. Highway 69 Suite 1.

Until recently, the annex, which the Postal Service also leases, kept limited hours. This past week, the annex extended its hours from 10 a.m. to 6 p.m. Monday through Friday, and from 10 a.m. to 2 p.m. on Saturdays and Sundays. The Sunday hours will last only through December, though.

The mayor also dislikes the increasingly longer wait times and the limited parking at the main branch, as well as the inconvenient locations of the main branch and the annex.