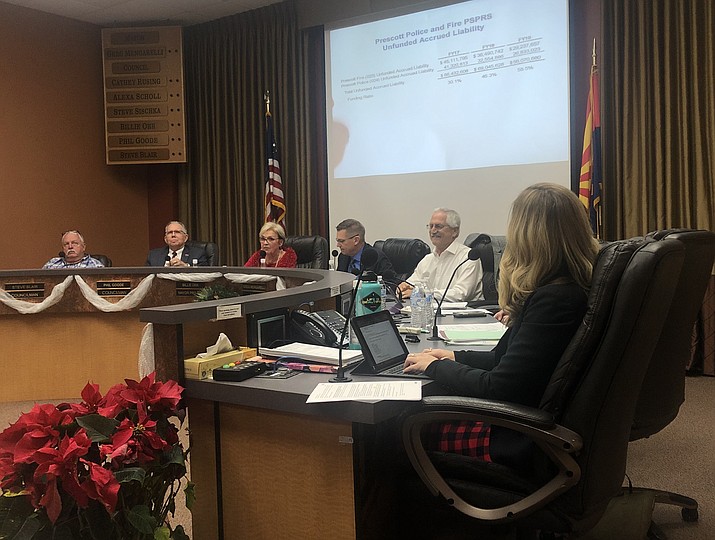 Members of the Prescott City Council get information on the annual report from the Public Safety Personnel Retirement System (PSPRS) during a meeting on Tuesday, Dec. 10, 2019. The report shows that Prescott’s pension debt dropped by nearly $13 million for 2019. (Cindy Barks/Courier)

For the second consecutive year, Prescott’s pension debt has gone down by millions of dollars.

In a report at the start of the Prescott City Council’s Tuesday, Dec. 10, meeting, Mayor Pro Tem Billie Orr announced that this week’s annual report from the Public Safety Personnel Retirement System (PSPRS) showed that Prescott’s unfunded liability was down by nearly $13 million for 2019.

That comes after last year’s drop of about $17.4 million in the public-safety pension debt.

Overall, the city reports that its unfunded liability with the PSPRS is down about $30 million since the implementation of Proposition 443 — the three-quarter-cent sales tax increase that voters approved in 2017.

According to the report from PSPRS, the city’s unfunded liability with the pension now stands at $56 million. That is down from 2017’s $86.4 million. The city currently stands at 58.5% funded on its responsibility for the pensions for Prescott’s retired police officers and firefighters, compared with its 30.1% funding level in 2017.

“We are making tremendous progress,” said Orr, one of the council members who advocated for the 2017 sales tax increase. “We will continue to make strides like this every year, until we are fully funded.”

Prescott Budget and Finance Director Mark Woodfill explained after the meeting that the city paid an additional $14.7 million to the PSPRS in the past fiscal year — all of which was generated through the Proposition 443 sales tax.

Those payments are in addition to the $6 million that the city was required to pay to PSPRS for its Annual Required Contribution (ARC), which includes the normal pension costs, along with the city’s amortized payment toward the unfunded liability.

In total, the city paid about $20.6 million to PSPRS in the past fiscal year.

Without the revenue from the Proposition 443 sales tax over the past two years, Woodfill estimated that the city’s debt likely would currently be in the $90 million range.

“It’s good news,” Woodfill said of the debt reduction. He pointed out that the city is “doing a great job” of increasing its assets with the pension fund.

GETTING A HANDLE ON DEBT

Indeed, the growing debt and the increasing Annual Required Contribution were central to the city’s 2017 push for the sales tax increase as a means of getting the pension debt under control.

In addition to the revenue from the sales tax, the City Council opted in late 2017 to make a lump-sum payment of $11 million to the PSPRS out of its reserve fund.

That payment combined with the $6 million from the sales tax revenue from the first half of 2018, along with a $1 million state contribution to cover the liability for the fallen Granite Mountain Hotshots and the proceeds from the sale of Fire Station 7 and the Hotshot buggies — for a total of $18,604,625 in additional PSPRS payments in the 2018 fiscal year.

Adding in the Annual Required Contribution of $8.7 million, the city ultimately paid the PSPRS $27.3 million for that year.

City Council members have maintained that the approval of Proposition 443 has helped the city to stabilize its general fund, which has allowed it to dedicate money to other needed community projects.

For instance, Greg Mengarelli pointed to the council’s decision to allocate $3.5 million toward the new airport terminal this year.

“We would not be sitting here talking about an airport if it were not for Proposition 443 and getting a handle on the pension debt,” Mengarelli said during Tuesday’s presentation on the airport master plan. Based on the current rate of the sales tax revenue, Woodfill estimated that the city should have its pension debt paid down by the end of 2025.

The aim of Proposition 443 was to nearly pay off the city’s PSPRS debt. The ballot wording stated that the 0.75-percent sales tax would end the earlier of Dec. 31, 2027, or at such time as the city’s PSPRS unfunded liability is $1.5 million or less as determined by actuarial valuation.