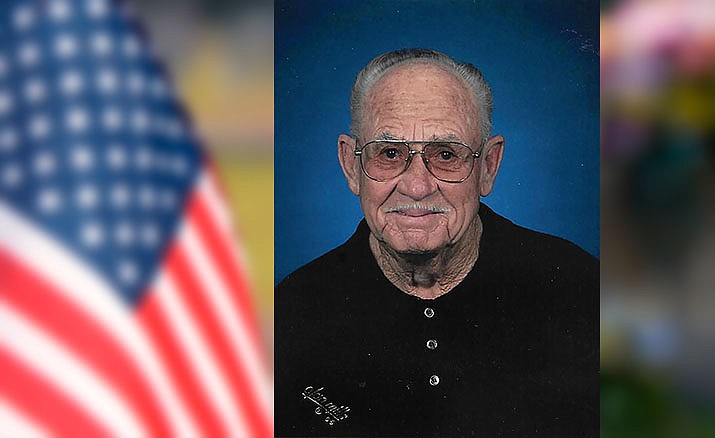 Jack Williams entered the Kingdom of Heaven on December 4, 2019 at the age of 92.

He was greeted by his mother, Viola and father, Edward Williams and 9 siblings.

Jack leaves behind his bride of 73 years “Ms. Marian” Mulville Williams; sons, Tommy (Cyndi), Tony (Jan), Terry (Shelly) and his only daughter Tammy; grandchildren, Cathy, Bo, Jessica, Eric, Brooke, Josh, Chelsea, Logan, Rito, Lucas and Monroe; 29 great grandchildren and 3 great-great grandchildren. He leaves behind many nieces and nephews who all hold a special place in their heart for their Uncle Jack.

Jack was born in Konawa, Oklahoma and as a young boy moved to Buckeye, Arizona, where he and his family worked the cotton fields of the Harquahala Valley.

He served his country proudly in the Merchant Marines and the US Army.

Jack married Marian Mulville in 1946. Jack and Marian settled in the close-knit town of Bagdad, Arizona and raised their 4 children there.

Jack worked in the copper mine as a Mill Wright and retired as a Maintenance Foreman after 30 years of service.

Jack and Marian cherished their years in Bagdad.

After retirement, the couple moved to Wikieup and started the Williams Nut Farm.

The farm holds many treasured memories by all, but especially by their many grandchildren who helped pick pecans and learned good work ethics alongside their Grandpa Jack.

After many happy years on the farm, they then made Kingman, Arizona their home. The last 6 years were spent alongside Marian at the Pioneer Home in Prescott, Arizona. The Williams family would like to thank the Pioneer Home for their kindness and compassion during this time.

A memorial service will be held on Jack’s birthday, February 14, 2020. Everyone who knew Jack, knows that he is whistling a tune in heaven.

Heritage Memory Mortuary assisted the family with the arrangements.