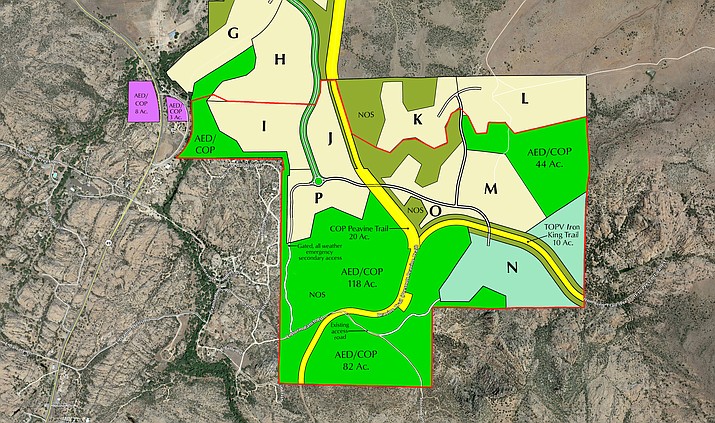 A proposal is on the table that would save the heart of the Granite Dells in exchange for enough water to develop upwards of 1,000 additional homes north of Highway 89A. The details of the proposed trade-off are expected to be central to a special Prescott City Council meeting at 5:30 p.m. Thursday, Dec. 12, at Prescott Mile High Middle School’s Hendricks Auditorium. (City of Prescott/Courtesy)

With water and land as the two currencies, a proposal is on the table that would save the heart of the Granite Dells in exchange for enough water to develop upwards of 1,000 additional homes north of Highway 89A.

The details of the proposed trade-off are expected to be central to a special Prescott City Council meeting at 5:30 p.m. Thursday, Dec. 12, at Prescott Mile High Middle School’s Hendricks Auditorium.

The city announced the meeting this past week, and officials say it was planned as an opportunity for the involved parties to update the community on progress that has been made in the effort to preserve the land around the iconic Point of Rocks in the Granite Dells.

Mayor Greg Mengarelli said at the time that while the city is pleased with the new proposal to save nearly 500 acres of crucial Granite Dells land, the parties have yet to reach agreement on all aspects of the deal.

DETAILS OF THE PROPOSAL

Basically, the proposal would involve preservation of about 475 acres of land in the heart of the Dells in exchange for 1,082 acre-feet of water from the city.

“The negotiations are at a point where we could do a deal that saves the Dells,” Jason Gisi, developer with Arizona Eco Development (AED), said Monday, Dec. 9. “This land is priceless. We’re trying to negotiate a deal where we trade land for water.”

He allows, however, that the involved parties have yet to reach an agreement on the amount of water that the city would have to provide in exchange for the preservation of the Dells land.

Along with providing water for the two Granite Dells-area parcels that AED earlier asked the city to annex into city limits, the 1,082 acre-feet of water would also go toward two new parcels located northeast of the Dells — along, and north of, Highway 89A.

AED does not plan to seek annexation of those two parcels, Gisi said, but rather would develop them in unincorporated Yavapai County.

The proposal would allow for 1,000 to 1,300 homes to be developed in the section that is adjacent to the highway, Gisi said. 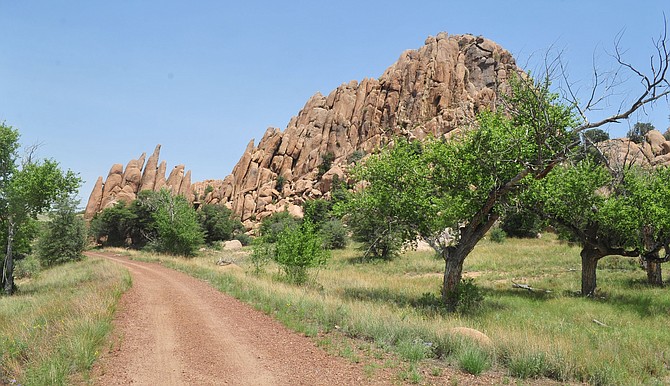 That development would front the north side of the highway for about a mile, he said — approximately between the Prescott Valley water tanks and Glassford Hill Road.

Another section to the north would be developed as two-acre lots and would involve about 320 homes, Gisi said.

Those homes would be in addition to the homes that are planned in the two AED parcels that are being considered for annexation into Prescott city limits.

The developer’s earlier submittal stated that an 866-acre parcel in the Point of Rocks area would consist of as many as 1,185 homes and a resort. Gisi says the new plan would move the resort to the north from its former proposed location along the Iron King Trail.

The other parcel being considered for annexation consists of 1,656 acres east of the Prescott Airport, and is being eyed for a total of about 1,550 homes.

In order for the proposed new deal to work, the city would need to change its water policy to allow for water service outside city limits — a move that has been discussed for months, but was delayed last month by the Prescott City Council.

Gisi maintains that allowing for the city water service in unincorporated Yavapai County would come with some advantages for the city.

For instance, he said, the two sections would be developed on city water and sewer, rather than with wells and septic systems, which is typical of county developments.

That, in turn, would allow the city to recharge back into the aquifer the treated wastewater from the development.

In addition, Gisi says, the houses would be developed under city water-conservation rules.

At the same time, he said, the city would not have the additional burden on its police and fire departments.

SAVE THE DELLS VIEW

Joe Trudeau, conservation director with the Save the Dells group, said that although the organization supports the basic premise of exchanging water for land, questions remain on the quantity of water.

“There’s a limit,” he said, adding that the “tug of war is in how much water the city can or should provide.”

Currently, he said, the organization feels the amount of water that is on the table exceeds what is equitable.

Still, Trudeau said, “Save the Dells feels like we have really come a long way.”

The organization opposed Gisi’s earlier proposal to preserve about 250 acres of land in the Point of Rocks area.

Although the 475 acres of preserved land falls short of the 500 acres that the organization has pushed for, Trudeau said this week that Gisi’s new preservation proposal “approximates the 500 acres.”

But, he said, “The devil will be in the details, and we haven’t seen the map yet.” He added that the organization still hopes negotiations would achieve the 500-acre figure.

Thursday’s meeting is expected to include presentations by Gisi, Prescott City Manager Michael Lamar, and a Save the Dells representative.

Noting that the Mile High Middle School auditorium holds nearly 1,000 people, Trudeau said Save the Dells is hoping for a full house.

Mile High Middle School is located at 300 S. Granite St. Noting that the middle school has limited parking available, the city is urging attendees to park in the public parking garage at 135 S. Granite St., which offers free parking.