All About Pets: Don't forget to trim those dewclaws 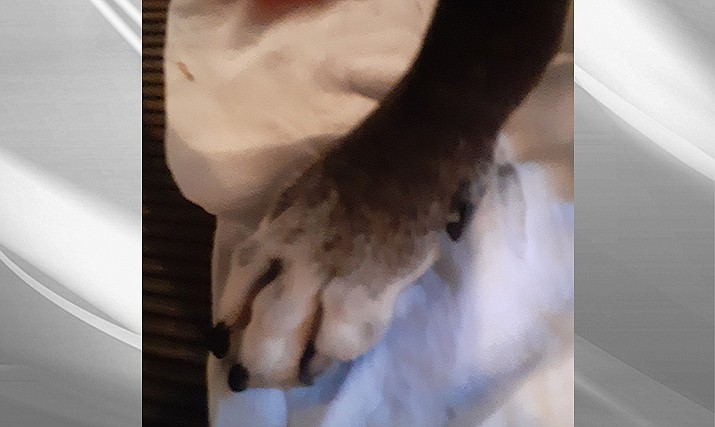 Lacy is happy to show her dew claw, which is located a couple of inches above the regular nails on the inside of the leg. They need to be checked regularly. (Courtesy)

A couple of weeks ago, I wrote about nail care. I neglected to mention dewclaws. As we all are aware, most dogs also have a fifth nail slightly up on the inside of the paw, called the dewclaw. Most breeds of dogs only have these extra nails on the front, but there are a couple of breeds, larger dogs, who have them on all four feet. Incidentally, there is a common belief that dogs born with the dewclaws on their hind legs, although quite rare, have a natural immunity to the venomous affects of a snake bite so long as the rear dewclaws are intact. (I read it, so it must be true!)

Many breeders remove the dew claws when the puppies are just a few days old — at the same time that they do the tail docking. Kind of a rough day for these babies. I also just learned that some organizations that do spay and neuters before a dog is put up for adoption, may also remove the dewclaws at the same time.

As you can imagine, this is not a pleasant experience for a pup: Imagine having your thumbs cut off!

Some argue that the dewclaws are dangerous because they can get caught on things and can rip or tear. On the other side of the argument are those in favor of keeping these nails, saying that they are used as we use our thumbs: for grasping things and also for balance when running or changing directions.

As most of our dogs have these dewclaws, we need to pay attention that they are trimmed regularly along with the other nails. Because they are not exposed to the rough ground like the other nails, they can grow and, if unchecked, might grow in a curve and can break into the skin of the leg. With dogs who mostly run about on grass and smooth surfaces, nails can be a constant issue. But as we are aware, all our pup’s nails need regular attention.

There is a dog breeder in southern Utah who did an in-depth study regarding the importance of dewclaws. He found that working dogs used these extra nails when running and also, when doing water work. He determined that we should not be removing them so routinely.

The dewclaw is often referred to as Vestigial, meaning that, in some cases, it no longer has a practical use. In times when dogs were used more for working and had to search for food, dogs would use their dewclaws to help them climb trees for prey and for gripping if in danger of falling or to avoid drowning.

Cats, who also have dewclaws, use them probably more than our dogs do. I have seen photos of cats climbing up a wall, and they certainly are using these extra nails for this kind of task.

Many different animals have had a Vestigial something that is no longer needed. They call it evolution, I guess! (I think I read that humans used to have tails!)

In my research, I discovered that it can either be one word or two, either dew claw or dewclaw is acceptable.

A couple of things to remember as we prepare for this very important holiday soon to be upon us: Many of us will be taking our dogs to the groomer or performing the task ourselves. Either way, it is important to remember that it is cold outside. We must not be clipping the coats too short. This longer hair provides insulation from the cold.

Also, remember that our pets can get very bored when we are so preoccupied with holiday activities. Don’t forget to stock up on a variety of chew sticks or whatever to help relieve that boredom.

In the meantime, Happy Holiday preparations.

Christy Powers is a freelance writer whose passion is studying and writing about pet health, nutrition and training. She can be reached at cpowerspak@gmail.com.