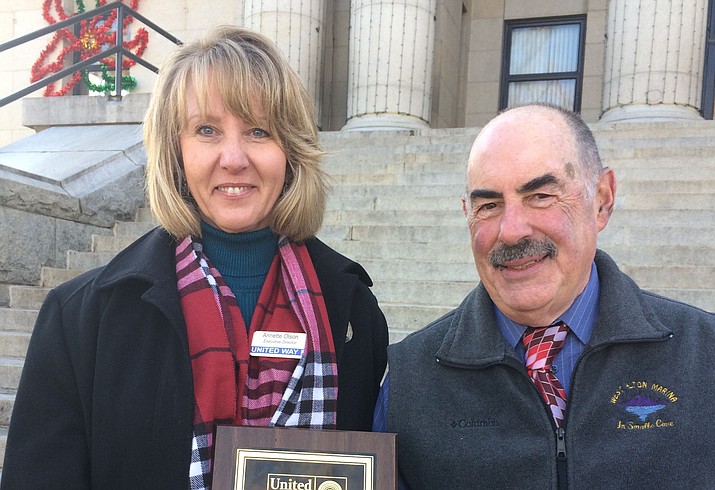 The late Roberts’ abiding affection for his adopted hometown — a Vermont boy who spent 45 years as a prosperous businessman in Alaska after three-and-a-half years as a POW in the Philippines — revealed itself on Monday with a gift he bequeathed to the United Way of Yavapai County.

In a surprise even to his closest relatives, the one-time Air Corp service member who fought in the Battle of Battan and died a year ago at age 97 at the Prescott VA hospice, left the agency the bulk of his estate: $3 million.

The United Way staff and board are beyond honored that Roberts recognized this organization over many others as a “funnel” for his philanthropic legacy.

Executive Director Annette Olson was caught completely unaware when she received in the mail a notice from an estate planner to meet with Roberts’ local attorney Chris Inman about the gift. She could never have imagined it would turn out to be a multimillion present that will enable the United Way to extend its reach beyond what it now does from its annual fundraising campaigns.

The United Way typically raises, and distributes, about $250,000 a year.

“We had no idea,” Olson said of Roberts’ intentions.

The United Way does not provide direct charitable services, but rather relies on community members to review annual requests for dollars to fund a variety of charitable programs that can range from youth entrepreneurship opportunities and work programs for homeless adults to library services and mental health resources. She said she can only imagine that Roberts’ must have had some appreciation for how the agency stretches its dollars so as to touch a multitude of worthy charitable endeavors across the county.

Olson said she and the board intend to craft a plan to invest and utilize these funds so as to continue to finance innovative programs “that fill in the gaps of services” for decades to come.

With tears in her eyes, Olson said she likes to think this honorable gentleman, who in life sacrificed for his country and in death is proving to be a hero to the most vulnerable in Yavapai County, will be “looking down and watching us” from his heavenly home. 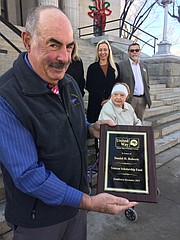 A humble man with a ninth-grade education, Roberts was a self-made man who moved to the Alaskan frontier and thrived: he started in real estate, served as an agent for an airline and then launched his own marina business, and then later started a charter fishing enterprise, said his nephew, Harry Boynton of New Hampshire, who came to Prescott this weekend to deliver a check to United Way leaders.

Ever diligent, and frugal, with his finances, Boynton said his uncle managed to live as he wished in retirement without assistance until his health declined such that he became a hospice patient at the Prescott VA, Boynton said.

Roberts was what Boynton described as a “man’s man” who, when not working, loved the outdoors, someone who always strived to be a faithful and good neighbor to others.

As for his uncle’s unexpected donation, Boynton said he thinks he wanted to spread his wealth.

“I think he just wanted to help,” he said.

At a short, sedate ceremony on the north steps of the holiday-decorated Yavapai County Courthouse, United Way staff and board members gathered to offer an official, “Thank You,” to Boynton, who repeatedly stated he is simply the “messenger” for his uncle.

One of the first projects the United Way intends to honor Robert’s gift will be to establish a Veteran Scholarship Fund for area college students, a cause Boynton applauded.

“I want him to get all the credit,” said Boynton as he was awarded a plaque honoring his uncle and the scholarship fund. “This was all him. This was his wish.”

With such a gift comes responsibility, agency leaders said.

United Way Board Treasurer Katie Kinon assured agency leaders will be wise about how those dollars are invested so as to “preserve (Roberts) legacy.”

Olson and Suttles said they hope this gift will be viewed as a vote of confidence by all of the agency’s loyal, and longstanding, supporters who embrace its mission to “respond to the community’s needs for years to come.”

“I still can’t believe it,” Suttles said of the “windfall gift.” “This will enable us to do things we couldn’t do before.”