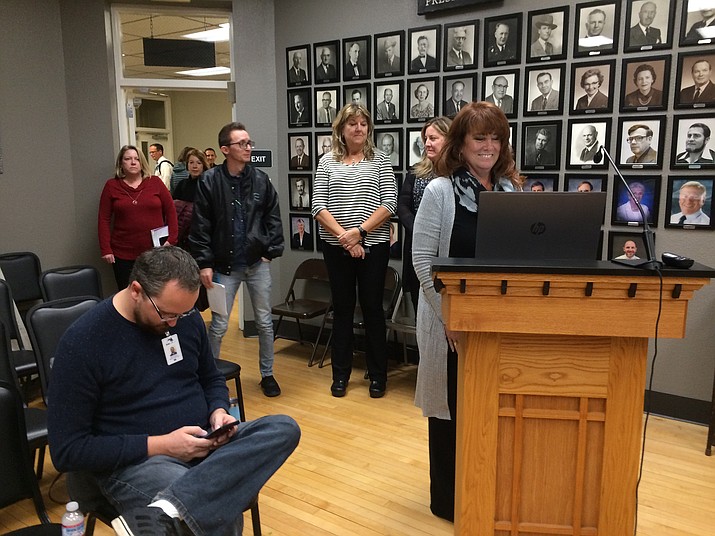 The ever champion of the Lincoln Lions, Hughes admitted that earning a “B” score on the state report card this year after the black eye “D” score last year has boosted faculty and staff spirits. More than that, though, Hughes said the faculty and staff embraced what they teach their students: one report card grade is not the be all/end all; growth is the constant goal in the educational learning process.

“We’re not perfect but we’re closer,” Hughes said of the data analysis and reviews that have gone into helping students be better prepared for the AZMerit standardized language arts and math tests scores.

One aspect of the work done that Governing Board members appreciated stemmed from a video showcasing a fourth grader focusing on his own academic performance. The student had a clear sense of what he needed to make corrections, and practice more so as to earn a better grade on his next test.

Everything from school culture to engaging students in their learning was explored over the last year. In some areas, Hughes said they needed to look at teacher talent and class sizes.

All of the coordinated effort is clearly making a difference, Hughes noted.

Instructional coach Lisa Hosking said even kindergartners are beginning the process of taking charge of their academic success. On vocabulary tests, the students can color in a bubble next to the words they have learned in a week.

The students get so excited to practice and bubble in the space next to words they might not have known at the start.

Fourth grade teacher Sebastian Puls said he works with students to “celebrate what they don’t know yet.”

The Lincoln learning culture is firmly rooted in a “growth mindset,” Hughes said.

In other Governing Board business, members voted to hire a systems engineer to assist with cybersecurity efforts in the district’s Internet Technology Department.

The job will pay just under $18 an hour for the course of the year. Once the data systems are in place, the position will revert to an IT technician at a lower pay grade.

This change for the coming year is a cost neutral proposal.

The board voted to continue with an agreement with the National Center for Youth Law (NCYL), a California-based non-profit whose mission is to help low-income children, and those in foster care, get intervention services they require. The district tried this last year, and from results administration recommended the agreement for the services be extended for this year.

The only cost to the district is staff time to meet with NCYL interventionists, and office space at the high school.

District Superintendent Joe Howard informed the board that in the future he will invite the staff to share more details about the program, and the results.