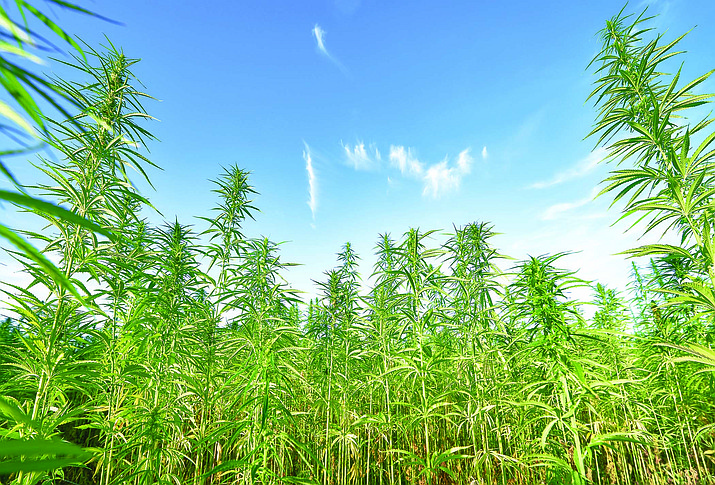 A field of hemp is seen in this file image. (Courier file photo)

PHOENIX — State lawmakers are being asked to weigh whether the concerns of marijuana farmers about the potency — and value — of their crops should allow them to put limits on those who grow hemp nearby.

Sen. Sonny Borrelli, R-Lake Havasu City, wants to enact a state law that would strip cities and counties of any right to regulate an “industrial hemp site.’’ That is specifically defined at any place where the cousin of marijuana is grown, harvested or processed.

The move comes on the heels of efforts by producers of marijuana — the version of the plant with psychoactive chemicals —to keep hemp farms from being located within at least five miles. They contend those nearby hemp operations — and specifically the pollen from male hemp plants — threaten to contaminate their own crops.

They’ve already got the Snowflake town council to adopt a five-mile buffer to protect Copperstate Farms, an ordinance that could be overturned if Borrelli’s SB 1019 is approved.

And the bill also would quash efforts to enact similar restrictions in Pima and Santa Cruz counties as well as the town of Parker.

Damien Kennedy, compliance and analytics manager at Amado Management, located just south of the border between Pima and Santa Cruz counties, said its a matter of financial survival for his operation.

The issue is stray pollen from nearby hemp farms.

After years of an outright ban, the federal government in 205 removed hemp from the list of controlled substances as long as the concentration of tetrahydrocannibinol — the psychoactive ingredient — did not exceed 0.3 percent. That led to 2018 state legislation permitting Arizona farmers to grow the hemp for its oils and fibers.

Only thing is, the pollen from hemp can fertilize what’s being grown for medical marijuana, as they are the same plant.

Here’s where Kennedy said it gets to be a problem.

As a whole, the marijuana industry raises only female plants. They’re the ones that produce the much-desired flowers.

“As soon as one of our female plants gets pollinated it stops producing THC and any other medicinal quality,’’ Kennedy said. “What it does is it takes all of its nutrients and puts it into that seed.’’

And the issue of fertilized female marijuana plants is even more complex than that.

“You don’t want to smoke seeds,’’ Kennedy said, which is why his operation has staffers who go around the 117,000- square-foot operation every day looking for male plants that might have sprung up.

“We absolutely cannot have seeds in there,’’ he continued. “If you’ve ever smoked it, you know if you smoke a seed you get the worst headache you’ve ever had in the world.’’

So what’s needed, Kennedy said, is a buffer zone.

“Pollen can travel a long way in the wind,’’ said attorney Ryan Hurley who works for Copperstate Farms. He figures that a five-mile separation between hemp farms and marijuana growers “is probably about minimum.’’

Kennedy, for his part, said 10 miles is preferable. And that’s complicated in the case of Amado.

“We’re within one mile of the county border,’’ he explained.

“So if we got a 10-mile setback in Santa Cruz and we don’t get one in Pima County that works with Santa Cruz, then somebody could just go to Pima County on the other side within a mile of us and put up a hemp plant,’’ Kennedy said. “And it would be perfectly legal.’’

Amado did make a similar request of Pima County earlier this year. But Chris Poirier, the county’s assistant planning director, said his agency saw no reason to go along.

“Slice it however you want, it’s still an agricultural use,’’ he said of hemp farms. More to the point, he said the county’s zoning code simply doesn’t address such uses.

“The zoning code is not the correct tool,’’ he said of attempts to protect marijuana producers.

Anyway, Poirier said, there is no compelling reason for the county to get in the middle of this squabble.

“Farmers have dealt with potentially conflicting crops forever,’’ he said. “And farmers deal with it, not zoning people.’’

“We didn’t want to be put in a position where we’re essentially picking winners and losers between industries,’’ Poirier said.

“We didn’t want to preclude somebody from choosing to use their land,’’ he continued. “And a 10-mile buffer is pretty significant.’’

Borrelli’s legislation will pick up opposition from Adam Trenk, an attorney whose firm represents both hemp and marijuana farmers. He said questions of what is good for a community should be decided at the local level, without state intervention.

“If Snowflake determined it was in the best interests of its constituencies to have a buffer, that’s good,’’ he said. “Why should the state be telling local government how to do their business?’’

And Hurley said there’s a reason for cities and counties to protect the marijuana growers against encroachment.

“Most of us are already established,’’ he said, and were around for years before anyone thought about the idea of growing hemp.

But Poirier said that doesn’t make it a county obligation.

“Medical marijuana is regulated by the health department at the state level,’’ he said. But hemp production is under the purview of the state Department of Agriculture.

“It is for them to deal with,’’ Poirier said.

That, however, is not going to happen, at least not now.

“We don’t have any jurisdiction,’’ said state Agriculture Director Mark Killian. And he bemoaned the fact that marijuana is the only crop in the state over which his agency has no purview.

That, Killian said, means more than protecting marijuana growers from cross pollination. He said it also means his agency has no power to go in and check for pests that might be escaping from medical marijuana grow facilities that could harm adjacent farms.

And Chris Minnick, spokesman for the state Department of Health Services, said while the 2010 law that legalized medical marijuana puts his agency in charge of regulating the industry it does not empower it to regulate where potentially conflicting farm operations can go.