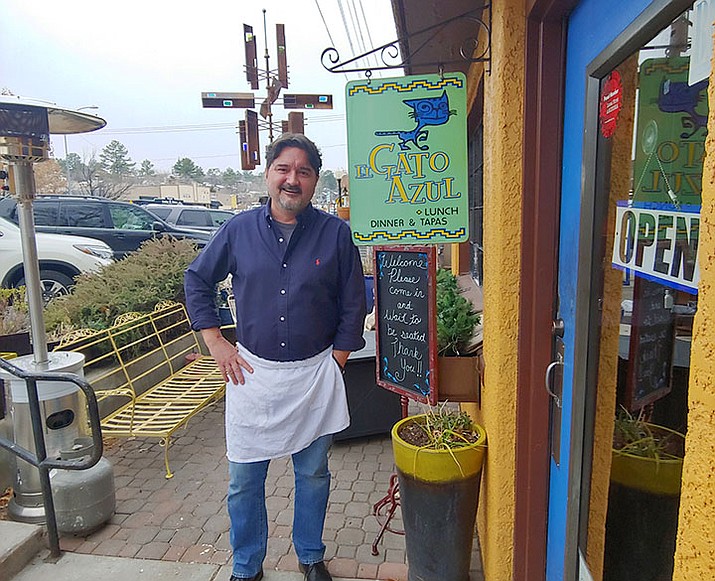 Barry Barbe has owned and operated El Gato Azul restaurant, 316 Goodwin St., in downtown Prescott for the past 15 years. Barbe (pronounced BARB) credits the restaurant’s success to its ability to adapt to changing times while focusing on a traditional familial atmosphere. (Doug Cook/Courier)

Fifteen years ago, on Acker Night, Barry Barbe opened El Gato Azul restaurant in Prescott with the idea of bringing families closer together during their dining experiences.

Nestled in between a tree-lined stretch of Granite Creek to the east and a small office building to the west at 316 Goodwin St., the artsy establishment has a cozy feel in the heart of downtown.

Barbe (pronounced BARB) centered his menu on dishes family and friends could share. The idea grew on residents and, today, its popularity continues to multiply.

On Sunday, Dec. 15, El Gato Azul, or The Blue Cat, marks its 15th anniversary, two days after Acker Night, the city’s annual Christmas festival at local businesses. Barbe, 52, and his staff will likely reflect on how the restaurant has changed through the years, particularly the menu.

In 2004, El Gato Azul started with 12 tapas, or small-plate appetizers, for lunch and dinner. Today, the restaurant has 60 tapas, which Barbe calls “Prescott-sized.” Seventy-five percent of the food on the menu is organic or locally sourced.

“The market was looking for something more substantial,” Barbe said, clarifying his “Prescott-sized” comment. “You might get one or two [tapas] and share. The entrees are passed around. That’s family-style dining.”

Growing up in Bristolville, Ohio, near Warren in the northeastern part of the Midwestern state, Barbe’s family would eat dinner together at 4 p.m., after his dad came home from work. On Sundays before church, they would eat breakfast together.

“People remember [eating with each other],” Barbe said. “I thought of a subtle way of bringing that back. People start talking at Gato, and that’s the biggest thing we’re about – a sense of community and family.”

Barbe, who has been in the restaurant business since 1985, earned a culinary arts degree from Johnson & Wales University in Charleston, South Carolina, in 1990. He started out as a music major before switching gears.

Of German ancestry, Barbe developed a joy for cooking from his mom, Shirley, as well as one of his childhood neighbors, Ingrid Richman, and his aunt, Donna, among others.

“I’ve always enjoyed the creative aspect, hospitality and caring for other people in opening restaurants, as well as interior design and menu development,” Barbe said. “But it’s challenging keeping things consistent and fresh.”

Barbe met his wife, Lori, in Hilton Head, South Carolina. They later relocated to the West to raise a family in Prescott.

For the past 10 years, Lori’s served as director of the American Lutheran School, a preschool at 1085 Scott Drive in Prescott. All four of Barry and Lori’s children are grown, and each of them currently works for the restaurant in some capacity.

Audrey, 24, labors on the retail end with online products and website maintenance. Jacob, 23, is a weekend manager. Hannah, 20, waits tables. Simon, 18, is a host.

“There’s not a better time to live in Prescott than right now,” Barbe said. “There’s so much concern with maintaining the heritage and feel of the community. What’s going on downtown is amazing.”

Since his and Lori’s move to Prescott in 1998, Barbe’s seen all of the ups and downs in the restaurant business. The Great Recession in 2007 made the business even more challenging, although he hung on when many others quit.

After the Great Recession, Barbe learned the importance of social media, particularly Facebook, in spreading the word about his restaurant. After having successfully built a following at El Gato Azul, Barbe wants to make an even bigger contribution, whether it’s for his community and its families or his employees.

“You have an opportunity to make a difference, no matter what it is,” Barbe said.

Traveling west on Gurley Street, from historic Mount Vernon Avenue to Park Avenue, Prescott has managed to preserve its small-town charm despite the significant growth around it the past 30 years.

“The vibe of the downtown has not lost its personality,” Barbe said from his office nearby on a damp, cloud-covered day Dec. 3. “It’s a great place to go and walk around.”

While Prescott’s downtown feel hasn’t changed much, its restaurant scene has grown and become more diversified in its food offerings since the Great Recession ended in late 2009.

In the late 1990s, there may have been four or five restaurants downtown. These days, there are so many that you’d be hard-pressed to name all of them.

“We’ve got a lot of different restaurants now,” Barbe said. “You don’t see that kind of diversity and quality in a town of this size. We’re all doing our own thing, with a twist.”

Barbe compares downtown Prescott’s restaurant scene to the small food courts that were once prevalent in malls. The restaurants in those courts treated one another like family.

“I’m less concerned about competition than I am in creating community,” Barbe said. “If we all talk with each other and share things, there’s a different feeling downtown.

“The more successful we are, the better it is for each of us.”