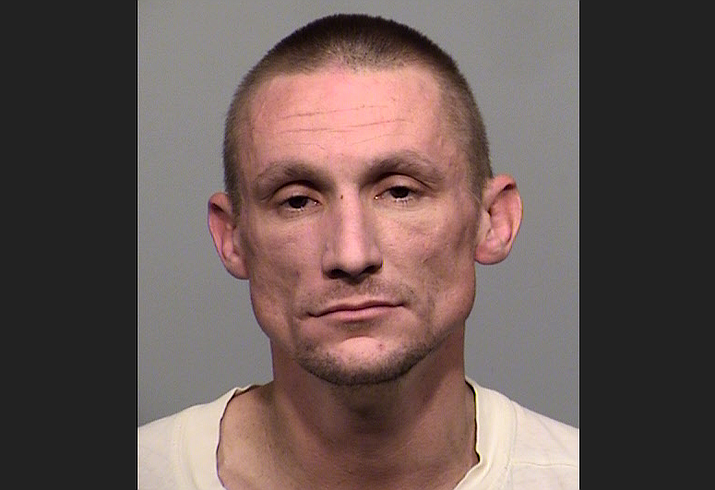 A Phoenix man was arrested in Prescott Valley after wrecking a stolen car and then stealing several valuables from a home midday Thursday, Dec. 5, according to a Town of Prescott Valley news release.

Prescott Valley Police Department (PVPD) officers responded to a call from a resident on Paseo Escondido at about 2:15 p.m. The resident said he and his wife returned home to find a man ransacking the place, the release states.

The suspect reportedly ran out the back door, having taken jewelry, a rifle and a shotgun from the home.

The suspect, later identified as 32-year-old Dennis Steven Harvel Jr. of Phoenix, ran east through the easement and dropped the weapons in the yard of another residence on Paseo Escondido, the release states. He then ran north to a third, occupied residence on the street and entered through the unlocked back door.

The homeowner talked to Harvel while the other resident went into another room and called police. Officers were then able to enter the home and arrest Harvel without incident.

Officers later discovered that Harvel was driving a stolen van out of Phoenix, which he had wrecked on Grandview south of Paseo Escondido before leaving on foot and burglarizing the first house, the release states. Officers recovered the stolen jewelry, both weapons, and the stolen van.

Harvel was booked into the Yavapai County jail on felony charges of burglary in the first degree, theft of private property, theft of a means of transportation, prohibited possessor (weapon), possession of burglary tools, and criminal trespassing.

“Prescott Valley Police cautions people to always lock their homes and vehicles whether they are at home or away,” said Heidi Foster, the communications relations coordinator for the Town of Prescott Valley.